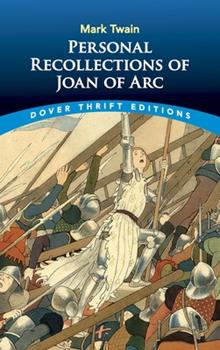 Personal Recollections of Joan of Arc

Regarded by many as the most luminous example of Mark Twain's work, this fictional biography of Joan of Arc was purportedly written by Joan's page and secretary -- Sieur Louis de Cont . (Twain's alter ego even shared the author's same initials -- S. L. C.) Told from the viewpoint of this lifelong friend, the historical novel is a panorama of stirring scenes and marvel of pageantry -- from Joan's early childhood in Domremy and her touching story of...

Photocopy of a real book

Published by Sheryl , 4 months ago
This book was a photocopy of a real book. This is not worth the price for this quality of book. I could have photocopied my own book for less

Published by Jo , 1 year ago
I recieved a photocopied paperback, which would be fine if it werent for indescriptible pages.

Published by Thriftbooks.com User , 21 years ago
Mark Twain astounded me with this account of St. Jeanne d'Arc's life and death. His twelve years of research are clearly evident in the meticulous detail and quotations taken directly from the French National Archive. Told from the point of view of Louis de Conte, it is an exciting narrative of the battles that won France its freedom and the amazing girl who made it all possible. I truly believed I was reading the memoirs of a man who had known her personally! Twain's idolization of Joan is prominant in each chapter. While this does taint his descriptions of the English and Charles VII, it is this adoration that makes this book so endearing. The reader gets pulled into fifteenth century France, cheering Joan's victories and mourning her injustices. For Twain, this must have been a labor of love, and I am grateful for his devotion to her tale. The footnotes add amusing and sometimes heartbreaking side information. Those who speak French will enjoy the portions written in that language. Those who don't, fear not! Being unable to read it will not ruin the story. While this is a serious novel, Twain's famous sense of irony manages to find a place amongst the legend. I suggest that everyone, particularly avid readers of Mark Twain or of historical figures, read this book. While some may not enjoy it as much as others, it is a history that needs to be kept alive.

Published by Thriftbooks.com User , 22 years ago
There are not enough words to properly rate this book. Mark Twain stepped away from his typical writing style, and the results are amazing. What first drew me to the book was the fact that he had written it, and I simply liked Joan of Arc. This book made me fall in love with her. Yes, it's long, but once you start, you simply can not stop reading. He tells the events of her life beautifully, speaking as Sieur Louis de Conte, her lifelong friend and companion. Everything from the Fairy Tree to her death is enthralling, and he draws medieval France as it was. France was falling, and Joan saved it. Her intelligance beat that of fifty scholars, yet she never learned to read. She could outwit the priest when she was a young child. She overcame all odds, and led France's army to victory. Not many people have read this book, be one of the few that has. I promise that you will not regret it.

A great book about an extraordinary person

Published by Thriftbooks.com User , 23 years ago
A master storyteller tells the tale of one of the most remarkable persons in known history. How a young, illiterate farm girl became commander-in-chief of France's armed forces at the age of 17; leading her army, which had become accustomed to defeat, to victory after victory, putting a reluctant king on his thrown and in the process, for a brief time, becoming the living embodiment of France to its people. It is a story of Joan's courage, intelligence and most of all her unswerving faith in her destiny and in her God, and how in the last year of her brief life she stood totally alone against her persecutors, whose sole objective was to have her die by fire.Twain's admiration for her shines through every page, and the more I learn about Joan of Arc, the more I share his admiration.This is a great book, and a must read for anyone interested in Joan of Arc.

The inspiring and poignant tale of a lasting heroine.

Published by Thriftbooks.com User , 23 years ago
I read Twain's Joan of Arc simply because it was included in a collection with 2 of my perennial favorites: The Prince and the Pauper, and A Connecticut Yankee in King Arthur's Court. I loved Joan of Arc also. But it is a very different cup of tea.Nowhere else does Mark Twain rein in his irreverent spirit as in this work! He allows his sense of humor to emerge only in the stories of Joan's peripheral friends and fellow villagers (the Paladin, most notably, and even the narrator in the story of the love poem.) The sense of the author's genuine respect and admiration for his amazing heroine permeates the book. The story of Joan of Arc, always a moving tale, takes on greater weight when a man like Mark Twain - a worldly, cultured, highly intelligent, and totally irreverent man - not only gives 12 years of grueling research to it, but then produces a book that is so unequivocally respectful and devoted.Such a picture he draws! THIS is a character to excite anyone's admiration, and to inspire us all to give our best selves. And throughout the tale, while one recognizes that it is indeed a "story", it rings convincingly true. No matter what construction a religious or non-religious reader may put on the happenings of Joan of Arc's story, it is still a story of an enduringly noble character and amazing intellect. A woman who stood - and still stands - above the remainder of her species.This is an inspiring and uplifting piece of work.
Trustpilot
Copyright © 2022 Thriftbooks.com Terms of Use | Privacy Policy | Do Not Sell or Share My Personal Information | Accessibility Statement
ThriftBooks® and the ThriftBooks® logo are registered trademarks of Thrift Books Global, LLC