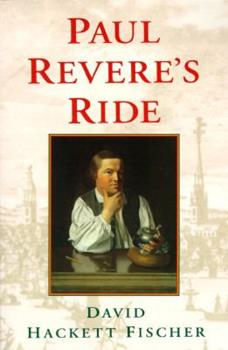 Paul Revere's midnight ride looms as an almost mythical event in American history--yet it has been largely ignored by scholars and left to patriotic writers and debunkers. Now one of the foremost American historians offers the first serious look at the events of the night of April 18, 1775--what led up to it, what really happened, and what followed--uncovering a truth far more remarkable than the myths of tradition. In Paul Revere's Ride , David Hackett...

Published by Thriftbooks.com User , 16 years ago
In what David Hackett Fisher calls these days of national amnesia, Paul Revere's ride - the event, not the book - holds a prime position in American folklore. Composers have written a march and an operetta about it. Artists have painted it, scientists have theorized about its astronomy, geology and meteorology and authors have written scores of children's books about it. The only group that seems to have ignored it is that composed of academic historians. Hackett Fisher says it's because the "only creature less fashionable in academe than the stereotypical dead white male is a dead white male on horseback." He's more reflective when he says an entire generation of academic historiography has lost its sense of the power of particular actions and contingent activities, what Walter Lippmann calls the crystallizing event. Paul Revere's Ride is about the political and tactical chess match between American patriots and British imperialists in the months leading up to the beginning of the American Revolution. Its epicenter chronicles the execution of the plan that alerted the colonial militia to mobilize and march to engage the British at Lexington and Concord in April, 1775. David Hackett Fischer demonstrates his skill as storyteller and historian as he wraps his work around civic-minded Boston silversmith Paul Revere and his nemesis, aristocratic British general, Thomas Gage. Both men believed deeply in freedom; Revere's version cherished collective rights with individual responsibilities, Gage's was more hierarchical, more elitist than Revere's. The book is wonderfully engaging because Hackett Fisher weaves primary sources into both historical and contemporary context while exploding several myths along the way. In other words, the book is about much more than Paul Revere's ride. Hackett Fisher describes the revolutionary movement in Boston as large, open, diverse, complex and pluralistic. For example, there were 255 members in seven groups of Massachusetts Whigs that together formed the leadership of revolutionary New England. Paul Revere was one of only two men who were members of five of the groups, making him a lynchpin of the revolutionary movement. Born in 1734, Revere was the son of a French Huguenot immigrant, Apollos Rivoire and a fifth generation New England Yankee, Deborah Hitchborn. He had matured into an American original: a successful small businessman who attended church regularly, earned a "can do" reputation by serving his community frequently - including leadership in several political groups - and considered himself a gentleman. Revere's first wife died after bearing eight children; his second wife gave birth to eight more. Of his 16 children, he buried five as infants and five more as young adults. Revere was naturally gregarious and well-met, but Hackett Fisher says his spirits were utterly crushed by each child's death. A measure of the man, he renewed himself each time with a deep commitment to the common ca

Published by Thriftbooks.com User , 17 years ago
David Hackett Fischer's "Paul Revere's Ride" is an exciting look at what may be one of the more misunderstood events of the American Revolution. Fischer makes a remarkable effort to dispel the many myths that have sprung out of Revere's famous ride to warn the residents of Lexington and Concord to the approach of the British expedition. The narrative is markedly descriptive and gives one a "you are there" feel. The book is very well researched with copious notes and numerous appendices that provide further depth and detail to the narrative. I found Fischer's highly detailed maps to be of great benefit. They were detailed and in conjunction with the narrative allowed for an in-depth understanding of the events of April 18-19, 1775.

The Hero and his context

Published by Thriftbooks.com User , 17 years ago
Judging only by the number of times I talked about it with friends and family, this is a most impressive book. David Hackett Fisher has assembled a masterwork of storytelling and fact to tell the story not only of Paul Revere, but of the social milieu in which he operated. My fear in reading modern books about historical heros is that a better-researched telling will rub away some of the hero's luster. "Ride," however, teaches new lessons about Revere, while actually enlarging his contribution to history. Hackett tells the tale of Revere, a Boston craftsman, who was a member of many of the colonial resistance organizations of his day. No one else knew as many colonial leaders and activists as he. When it came time to warn colonists of the British movements toward Concord (to confiscate stores of powder being stockpiled by local militias) Revere was a handy person to have in the saddle. Unlike the impression given by popular legend, Revere did not ride the countryside at random, but with purpose. Knowing the names and residences of the captains of local militias, he warned them of the British movements, allowing the captains to spread the alarm to their own militias. By the time the sun rose, militias throughout eastern Massachusetts and southern New Hampshire were streaming toward Concord. Though stopped by a British patrol short of his destination in Concord, Revere set out on foot to Lexington to warn resistance leaders Sam Adams and John Hancock and to hide important documents. Revere's presence in Lexington as the British entered town, and his earwitnessing of "the shot heard round the world" were thrilling to read and retell. Hackett's retelling of Revere's story marks a shift (in my experience) from imagining heros as noble loners working in a social vacuum. Hackett reminds us that though Revere was personally courageous, persistent, intelligent, efficient and resourceful, his heroism required a matrix of others who were already well-prepared to mobilize against the oppressor. Hackett's analysis of the societal context of heroism was the overarching message of the book. Heros like Revere have no usefulness apart from a society primed to act; societies desiring change often need the elan of the individual to spur them forward.

Published by Thriftbooks.com User , 20 years ago
David Hackett Fisher's Paul Revere's Ride ("PRR") is a wonderful work of narrative history, with some splendid historiography tacked on at the end. Paul Revere's role in the events of April 18-19, 1775, has been contested by various critics. Descendants and partisans of William Dawes have claimed that his role was far more significant. Post-modernists have deconstructed Rever's ride as an exercise in national myth-making.Fisher puts Revere back in the center of the events of April 1775. Of course, PRR is more than just an account of the ride. Fisher gives us a blend of biography and history--he opens with a short account of Revere's youth and then situates Revere in the Boston Whig movement that gave rise to the Revolution. The ride is then put into the context of the origins of the British expedition and the battle of Lexington and Concord.One of the things I like best about PRR is Fisher's even-handness and basic fairness. Revere takes center stage, but Fisher does not overstate the case--he acknowledges that others played important roles (notably Dawes). Even as to Revere's silversmithing, Fisher acknowledges that Revere's work was not always perfect. General Gage and the other British protagonists are given fair--even sympathetic--treatment.One particularly interesting contribution made by PRR is Fisher's treatment of the Lexington-Concord battle as a public relations issue. He explains how news spread through the colonies, how Congress got their version of events to London before Gage, how that account affected British public opinion. Given how important public opinion was in the course of the war, this is a very valuable treatment.Lastly, but maybe not least, the book is superbly illustrated.In sum, very highly recommended.

Riveting account of the first sparks of the Revolution

Published by Thriftbooks.com User , 21 years ago
This book was a real surprise and fantastic read, especially for those who are Amercian History buffs. The action moves along at a good clip, with excellent maps provided along the way. I was struck by three themes: the impact that one individual (Paul Revere) can have on historical events; the tragic consequences of poor leadership (General Gage); and what was truly incredible about the early American patriots -- their ability to mobilize so quickly and effectively, despite having no formal military training. You may think you know these details already from your early school history books -- Fischer's account of these events will show you what you've been missing.Finally, I recommend reading this in the fall if you're really missing New England!
Copyright © 2020 Thriftbooks.com Terms of Use | Privacy Policy | Do Not Sell My Personal Information | Accessibility Statement
ThriftBooks® and the ThriftBooks® logo are registered trademarks of Thrift Books Global, LLC