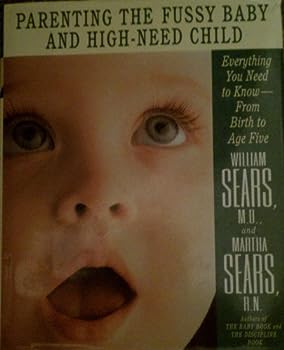 Parenting the Fussy Baby and the High-Need Child: Everything You Need to Know-From Birth to Age Five

by William Sears and Martha Sears

The authors of the best-selling The Baby Book offer practical, time-tested advice on coping with a difficult baby, including thirty-five ""baby calmers,"" tips on helping babies sleep, and advice on... This description may be from another edition of this product.

Published by Thriftbooks.com User , 18 years ago
As a first time mom I was dismayed when my baby cried all of the time and only seemed somewhat less miserable in my arms. He wanted, no needed to be touched all of the time. He nursed a lot, and slept very little. He had colic for SIX months and I think I cried along with him every day.We went to the doctor but there was nothing physically wrong with him. I felt like it was our fault,that we were doing something wrong. Until I found this book and bought it out of sheer frustration.Thank goodness for this book and for the Sears! Finally, someone who understood what we were going through. Finally, someone who gave solid advice and ideas for how to deal with the situation. Not to break the baby of his behaviors, but how to deal with them, diffuse them, roll with them and help him grow. I was able to get past the feelings of guilt and failure and be a better parent to the baby we had.As time went by, he slowly grew out of the high needs behavior and now he's a happy, spirited six year old who brings us joy every day. Fortunately, our second wasn't high needs and slept through right away but he's now a very spirited toddler, so I have used this book again, as a reference. For people who expect every word in this book to apply to them evenly, I think you'll be disappointed, that isn't what a reference book is or does. This book will help you in many ways but not everything will be applicable to every single thing, nor is it supposed to make you feel bad if you don't do every single thing they suggest. It's a great reference for those parents who are at their wits' end in dealing with a high needs baby and I am so very glad I found it!

"How to turn a fussy baby into a wonderful child!"

Published by Thriftbooks.com User , 21 years ago
Our daughter was THE "poster child" for colicky, fussy babies. She had colic so severe [crying 10-12 hours a DAY for first 12 weeks!] that our Pediatrician told us "This isn't colic, she just has a bad disposition." [UGH - we don't use him any more needless to say - and the crying stopped abruptly at 12 weeks]. After the colic passed, she continued to be a VERY "hands on, high need" baby. She was quite a challenge to parent that first year. Thank goodness I found this book! I can still remember the first time I read it - the sigh of relief that I wasn't alone and the wonder at all the great ideas and suggestions in the book. We put these suggestions to work in our parenting and followed Dr. Sears' advice to the letter. Now we have an angelic two year old - she's a joy to be around. She is now the easiest kid in the world to parent - the most easy going, friendly, and sweet kid you could imagine. Now my friends all say how lucky I am to have such an easy toddler! I think it is due in great part to Dr. William and Martha Sears and their wonderful insight and advice - their suggestions certainly worked for us!

It's my son in print!

Published by Thriftbooks.com User , 21 years ago
During the first few weeks of my son's life, I would have gone utterly out of my mind without this book! Before he was born, I thought fussy babies happened only to other people -- those who didn't see a midwife, have a homebirth, live simply, plan to attachment parent... you get the idea :) I have been humbled completely by his personality... and this book sooo helped me to realize that his fussiness wan't anyone's fault; he was just born wired that way. And it has been an excellent reference for us to work with his needs instead of against them, and realize that his traits, so annoying at times when he was littler (he's now four months old), will help him out as an adult. [It's funny now, watching video of us when he was a newborn; we speak as though we're in the midst of a hostage crisis, counting the days since his birth. We didn't think we'd have another, but are now already considering it in a couple of years. It started out tough, but he's now a very energetic, serious, hyper-interested baby, and we love him dearly.]

It was great just to finally get some reassurance!

Published by Thriftbooks.com User , 22 years ago
After suffering through six months of sleepness nights and napless days, it was great to just hear that we weren't alone - or worse, doing something wrong which was promoting the behavior we so much wanted to get rid of. It was also reassuring to read that what we were instinctively doing would not lead to a spoiled baby later as so many people had told me. It gave us the strength to go on!

Great for ALL parents, not just high needs

Published by Thriftbooks.com User , 22 years ago
This was the only book I found that had information about the hidden causes of fussiness (in our case it was a food sensitivity!). My pediatrician at the time didn't even hint on what the book thoroughly explains -- that what appears to be colic might not be, that babies don't necessarily have to suffer through it, and a detailed elimination diet to help relieve their pain. All that, plus wonderful soothing techniques that can be applied to any baby in those first few blurry months. Thank you Dr. & Martha Sears!
Trustpilot
Copyright © 2022 Thriftbooks.com Terms of Use | Privacy Policy | Do Not Sell or Share My Personal Information | Accessibility Statement
ThriftBooks® and the ThriftBooks® logo are registered trademarks of Thrift Books Global, LLC