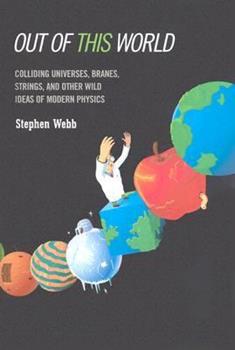 Out of This World: Colliding Universes, Branes, Strings, and Other Wild Ideas of Modern Physics

Stephen Webb, author of WHERE IS EVERYBODY?, takes the interested amateur on a thrilling and enlightening tour of the amazing, even bizarre, new ideas of modern physics, including alternatives to the Big Bang, parallel universes, and an imaginary trip to the other side of the black hole.

Published by Thriftbooks.com User , 17 years ago
Out of this World - Colliding Universes, Branes and other Wild Ideas of Modern Physics by Stephen Webb is a humble exercise in reminding one not to judge a book by its cover. I was surprised by the difference between my initial judgment (by its title & cartoonish cover) and my evolving sense of appreciation for the depth & thoroughness this author brings to a general lay-audience. Stephen Webb provides a clear & accessible introduction to the most important subjects in fundamental physics while bridging the gulf between "gee wiz" popular science books (e.g. "Fabric of the Cosmos") and the deeper, more technical treatments that top out at the Undergraduate and Graduate level. Keep in mind this book is, strictly speaking, categorically qualitative (i.e. non-mathematical). The 11 chapters are subdivided into succinct & digestible sections with generous figures, tables and photographs (145 total) illustrating concepts of physical processes and the key physicists involved. A 14 page Glossary, 2 page Bibliography, and a fairly thorough 6 page index close out the book. The scope of this book is grand in its broad range of subjects is covered in a concise no-nonsense, no-holds barred language. Group Theory & Gauge Symmetries, Special & General Relativity, Quantum Theory, the Standard Model of particle physics, Quantum Field Theories (Electroweak (QED) & Quantum Chromodynamics (QCD), Big Bang cosmology, and a fairly comprehensive coverage of Grand Unified Theories (GUTS), Supersymmetry (SUSY), Superstrings and M-Theory. All these subjects are put into proper historical context placing appropriate credit to the key physicists. After an introductory chapter, Webb leads us through a profundity of symmetry principles in chapter 1: continuous & discrete symmetries, spatial & temporal translations, Noether's Theorem (symmetry & conservation laws: time-energy, rotation-angular momentum), mirror & parity symmetry, Lorentz transformations/invariance principles. The chapter concludes with a rather nice qualitative treatment on mathematical groups - introducing the reader to Special Orthogonal/Unitary (SO(N), U(1) & SU(N)) and exceptional Lie groups and their importance to symmetries in fundamental physics. In chapter 2, the author crafts a beautiful real-world example of a practical application of both physics on a large scale (General & Special Relativity) and small scale (Quantum Mechanics: Planck scales, the Uncertainty principle and virtual interactions) by discussing how these "Twin Pillars of Physics" make the Global Positioning System possible. Chapters 3 & 4 are my favorites. They quickly bring you through the way high energy physics produces and classifies the constituents of our Standard Model. The key concepts of units of energy, rest mass, Electric charge and spin; Fermions & Bosons, leptons, and the Quark model of Hadrons are fleshed out for our edification. Also, a fascinating aside reminds us that th

Another enjoyable and informative read by Webb

Published by Thriftbooks.com User , 17 years ago
The first book I ever read by Webb concerned the Fermi Paradox and was written in an enjoyable and easy style. He takes the same approach in this new one "Out of This World". The subject, on the surface anyhow, seems in some ways less-friendly - super string theory and the building blocks of the universe - but he handles it in the same easy style that a non-mathematician or scientist (such as myself) can understand. I had recently read "Elegant Universe" and found Webbs examples more approachable. It also goes further in some areas (though on the whole I think the two compliment each other). I consider myself technically minded but not too knowledgeable of physics other than what I covered at school. His level of explanation gave me a deeper insight and the coverage of black-holes and gripping. Normally I could not imagine using the words "page-turner" in describing a book like this, but there where points where I wished my commute was longer. Whoever thought I'd understand zero to eleven dimensions! In short I would recommend this book. It is one of the few books that has changed and shaped the way I look at the world around me. There were a few points here and there which I could not understand but that wasn't a failing on the authors part rather mine (I mean in the end, it is deep physics!).
Copyright © 2020 Thriftbooks.com Terms of Use | Privacy Policy | Do Not Sell My Personal Information | Accessibility Statement
ThriftBooks® and the ThriftBooks® logo are registered trademarks of Thrift Books Global, LLC