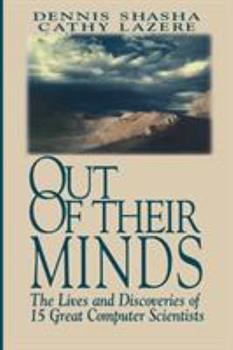 Out of Their Minds: The Lives and Discoveries of 15 Great Computer Scientists

by Dennis E. Shasha and Cathy A. Lazere

Imagine living during the Renaissance and being able to interview that era's greatest scientists about their inspirations, discoveries, and personal interests. The latter half of our century has seen its own Renaissance--informations technology has changed irrevocable the way we live, work, and think about the world. We are fortunate, therefore, that the authors of Out of Their Minds have been able to talk so candidly with the founders of computer...

The right mix of biography and science; highly readable

Published by Thriftbooks.com User , 21 years ago
Writings on computer science celebrate the passive voice, the obtuse formalism, the multitude of graphs with dashed and dotted and dashed-dotted lines and tiny legends. While sometimes of interest to researchers, this literature is entirely foreign to those outside that clique, not because computers are irrelevant, but because the ideas behind the information revolution have been presented in an intentionally stilted and impersonal manner. The same enforced distance characterizes technical books. As Alan Lightman observes in the January 1999 issue of Atlantic Monthly, "Modern textbooks on science give no sense that scientific ideas come out of the minds of human beings. Instead science is portrayed as a set of current laws and results, inscribed like the Ten Commandments by some immediate but disembodied authority." Cathy Lazere and Dennis Shasha break from that tradition in this compelling book. Here we find that, unlike mathematics and theoretical physics, for which intellectual breakthroughs generally are made by the very young, "Rabin invented randomized algorithms in his forties; McCarthy invented nonmonotonic logics in his fifties, Backus worked on functional languages and Dijkstra developed new methods for mathematical proofs in their sixties." We come to understand that Danny Hillis' fascination of neuroanatomy provided telling analogies for his work on massively parallel machines. We are surprised that Stephen Cook did not foresee the widespread applicability of NP-Completeness, that John Backus thought Fortran might be useful for a single IBM machine model, rather than as the first truly platform-independent programming language. We get caught up in the adrenaline of Alan Kay's design of Smalltalk, simplifying it until a complete definition could fit on one page; the intrigue of making connections between disparate fields, as Leslie Lamport did between special relativity and distributed systems; the frustration of the initial disparagement by those who didn't understand the insight or its implications, as John McCarthy experienced when he published his first serious paper on artificial intelligence. Lazere and Shasha's book will be of interest to scientists and nonscientists alike: they give enough of the background of the discoveries to make them understandable to the general public, while providing the fascinating human context and involvement so missing from other sources. "Out of Their Minds" is just the right mix of biography and science, highly readable, and astonishing in its breadth. It is a wonderful book, full of wonder.

It takes one to know one

Published by Thriftbooks.com User , 22 years ago
From a professor who has contributed extensively to Computer Science and who has his own share of idiosyncrasies, comes this wonderful book about the anecdotes in the lives of 15 of the greatest computer scientists. It takes a compelling, at the same time intriguing, look at how great minds arrived at the great thoughts that have changed the face of Computer Science today.

Published by Thriftbooks.com User , 23 years ago
The authors interviewed 15 computer scientists and summarized their lives and their major technical contributions. There are fascinating details about the researchers' backgrounds (e.g. some were good students, but others flunked out) and very clear descriptions of their work. The people chosen span the field, from theory (Rabin, Cook, Levin) to computer design (Fred Brooks, Burton Smith, Hillis) to AI (McCarthy, Lenat). A great introduction to computer science for general readers, but also a lot of fun for techies. Highly recommended!
Trustpilot
Copyright © 2022 Thriftbooks.com Terms of Use | Privacy Policy | Do Not Sell My Personal Information | Accessibility Statement
ThriftBooks® and the ThriftBooks® logo are registered trademarks of Thrift Books Global, LLC