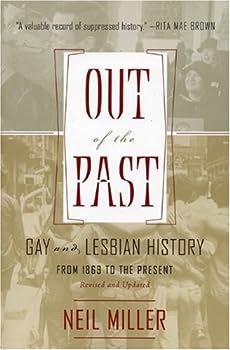 Out of the Past : Gay and Lesbian History from 1869 to the Present

The updated and revised edition of Neil Miller's multi-award winning gay history tome. A unique and hugely absorbing narrative history of gay life - from Oscar Wilde to the first gay marriage performed in San Francisco in 2004 - by the award-winning journalist and distinguished author of Out in the World and Sex-Crime Panic. Miller accompanies his narrative with essays and excerpts from contemporary and historical sources and the text is illustrated...

Published by Thriftbooks.com User , 12 years ago
I am currently reading Out of the Past. It has given me an overview of the history of homosexuality. It has given me an understanding of how homosexuality was seen and reacted to in the past and how far the gay community has come. It also breaks it down in different societies such as; England, France, Germany and how each had its onw laws to keep the homosexuals down and treated as less than human. There were times when the homosexual were persecuted, imprisoned and punished for who they were. They were treated as if they were sick. They were also entramped, in other words they were set up and in doing so they would lose their jobs and blacklisted for future blackmailing. The homosexual community has come along way but it seems that they still have a long way to go. They are still shuned and don't share the legal rights as any other citizens. It seems that the law doesn't include them in the right to liberty and freedom as any heterosexual enjoys. The day that the homosexual community are totally accepted as part of the fabric of this world, only then will they enjoy total freedom and enjoy who they are for what they are no more and no less. They have a right not only because they are homosexual but because they are human beings just like me and you, like our brothers and sisters, mothers and fathers.

Published by Thriftbooks.com User , 12 years ago
This book is the BEST resource I have found on capturing the multi-faceted, insightful, humorous and moving stories of gay and lesbian history in our country (and abroad). As a professor of psychology, this is an invaluable text for numerous history classes. Kudos to Neal Miller for researching this rich, rich history, written in a manner that is imminently engaging and fascinating.

Published by Thriftbooks.com User , 13 years ago
Miller, Neil. "Out of the Past: Gay and Lesbian History from 1869 to the Present". Advocate Books, revised edition, 2008. Reclaiming Our History Amos Lassen I would be willing to guess that many members of the GLBT community do not know a lot about out history and we have a wonderful one. Neil Miller has produced an extremely readable book that gives us a lot of what we need to know. He begins our history with when the word homosexuality appeared in a German pamphlet in 1869. Miller has done his research well and in 31 chapters we get a feel for the history of our brothers, sisters and ourselves. Some of what he has to say may astound you as he includes anecdotes that many do not know. Some of what he gives us is trivia (but I love trivia) but most of what he has to say shows us how we got to be where we are today. Miller's approach is like that of a typical history text and he cites abundantly. The book includes sidebars and writing excerpts and much of the book is devoted to gay history in the Western World. His updated edition fills in the gaps found in earlier editions. Here is a great introduction to who we are and where we have been. Miller balances his genders fairly and he gives is a wonderfully lucid history of the GLBT community.

Published by Thriftbooks.com User , 23 years ago
Neil Miller's done a great job of pulling together aspects of (western) gay history. I've read some of the sources for his lesbian chapters and he uses them intelligently to summarise main points. I assume he's does the same with the male stuff and material from other countries which was previously unfamiliar to me. His style is readable, succinct and balanced about how we look at the past from our current viewpoints. One feature of the book which is particularly pleasing is his use of extracts from writings he's referred to in his central text. This adds a good variety to the voice of the work AND the extracts are long enough (two or more pages in length) to inspire further study.I also like A) the pictures of famous historical figures, there's something particularly moving about them, (I never knew Willa Cather was so gorgeous!)and B) the balance of genders and countries covered is better than average.My advice - read it!

A GREAT SURVEY OF GAY HISTORY

Published by Thriftbooks.com User , 23 years ago
If you are interested in history, I highly suggest this book. Marginalized for eons, gay people are now an integral part of history. Relegated to the backburner, or whispered about in history sources, gay people have come forward with a great history. Within this collection, there are heartaches and triumphs, but always searching for the ideal of equality one day. Another good thing about this book is that it includes non-Western gay and lesbian history as well, yet another subject ignored by the "mainstream" history. An incredibly transfixing and fascinating book, I couldn't put it down, and read into the late hours of the evening.
Copyright © 2022 Thriftbooks.com Terms of Use | Privacy Policy | Do Not Sell My Personal Information | Accessibility Statement
ThriftBooks® and the ThriftBooks® logo are registered trademarks of Thrift Books Global, LLC