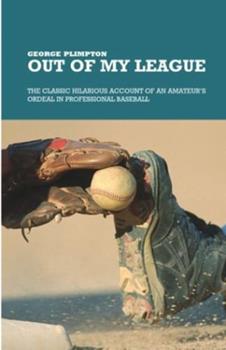 Out of My League: The Classic Hilarious Account of an Amateur's Ordeal in Professional Baseball

A classic of sport, and the first of George Plimpton's remarkable forays into "participatory" journalism, OUT OF MY LEAGUE chronicles with wit, charm, and grace what happens when a self-professed amateur wonders how he would fare on a baseball mound in a major league game. On an ordinary afternoon in the third-base-line seats of Yankee Stadium, Plimpton hits on what seems an inspired idea--to get on the mound and pitch a few innings to the All Stars...

Published by Thriftbooks.com User , 17 years ago
If you're not familiar with George Plimpton, he was a writer who was famous for trying to participate in pro sports. His accounts of his pathetic attempts to compete are always pretty funny. He's most famous for his book about his pre-season stint with the Detroit Lions ("Paper Lion"), but this book was his first experience as a participant. He had a deal to pitch to All-Star lineups from each league. The deal was that he would pitch his way through each lineup once, and whichever team had the most total bases against him would win the prize. His description of the beating he took is hilarious, and so are the notes from a friend he had in the stands. The guy told him that after the P.A. announcer told the crowd that George Plimpton, of Sports Illustrated would be facing the All-Star lineups the fans seemed confused. One kept asking who this "George Prufrock" guy was.If you've read any of his books and enjoyed them, you're sure to like this one too. If you try this one and like it you should check out his other books:"Paper Lion" and "Mad Ducks and Bears" - pro football"The Bodey Man" - golf"Shadow Box" - boxing"Open Net" - hockey

Published by Thriftbooks.com User , 18 years ago
This novel was about a guy who went to a Yankee game. He was a very rich man who sat right in the front down on field level. He was watching the famous Yankee's like Babe Ruth, and Lou Gerhig. He came up with this crazy idea to pitch in the so called " All Star Game" against Babe Ruth, Lou Gerhig and Hank Aaron. He knew a lot of baseball players so he was just talking about the idea but everyone thought it was just a crazy idea. Soon he really started asking about it as a real idea. The commissioner and Hank Aaron (the captain of the National League) and Babe Ruth (The Captain of the American League). He was asking if he could pitch in the all-star game. He was wondering if he could really do it and how much it would cost. He thought that if he hired a pitching coach and practiced everyday until the game that he would be good enough to really do good in the all-star game. He was starting to have press conferences about the idea and having talks with the two all-star team coaches. After about a week of thinking about the idea the commissioner of baseball told him that he would be able to pitch in the all-star game. When he started to warm up in the bullpen the crowd was going crazy. He came in the 5th inning. He started off pitching to Hank Aaron. He struck him out. That is a good start. He pitched two innings perfect. He did so great that he got to pitch in the major league after that. I liked this book because it was about baseball. It was about the old great players of baseball. It had to do with a fan like me making up a crazy idea that I would make up. To play baseball and pitch against major league great players to pitch against. It was a very cool sports book also so it was a good book. It is a very good sport baseball book that I think every baseball fan should be able to read because it is great.I would recommend this book to all players who like baseball and sports. But if you had to read you might want to study up on your all-time baseball's greatest player. Also boys should read this book that is about 8-teen in age. It has not such good language in it for young kids. It was a long book also so I would recommend this to people that have time to read this book. You have to take a long time and read every little detail to get this book.

Published by Thriftbooks.com User , 21 years ago
The book referred to in the review below (which should be deleted) is "Paper Lion". "Out of my League" concerns Plimpton's BASEBALL exploits, when he faced the A.L. & N.L. All-Star line-ups in Yankee Stadium in Autumn 1960. It is not as brilliant a book as "Paper Lion", but is certainly a DIFFERENT one.

Published by Thriftbooks.com User , 24 years ago
This book was about a journalist, George Plimpton, working for S.I. He joins the Detroit Lions training camp and becomes one of them. It is an interesting story with many stories from many famous players including Johnny Unitas and "Night Train" Lane. With some humor, Plimpton sacrificed his body and time for a great, well written book
Copyright © 2020 Thriftbooks.com Terms of Use | Privacy Policy | Do Not Sell My Personal Information | Accessibility Statement
ThriftBooks® and the ThriftBooks® logo are registered trademarks of Thrift Books Global, LLC