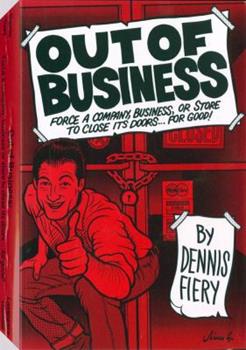 Out Of Business: Force a Company, Business or Store to Close Its Doors For Good!

by Knightmare and Dennis Fiery

Sometimes playing by the rules isn't good enough. When filing a formal complaint, asking for your money back, and engaging in healthy competition just don't do the trick, you need to take serious action. This book arms you with 101 ways to derail, deflate and destroy your target business. And if you want to protect your own business, this book is the best insurance policy you'll ever buy. Whether you're looking to cripple an international conglomerate...

Published by Thriftbooks.com User , 18 years ago
Ignore the last review. Dennis Fiery has created a masterpiece that should be read by everyone concerned about real justice. Learn techniques that can empower the little guys to take on the rich SOBs that cause so much misery, and emerge victorious over them. Loompanics is one of the greatest companies on earth!!

Published by Thriftbooks.com User , 19 years ago
Sometimes being polite, asking for your money back, writing letters and even yelling at various company officials just isn't enough. After you have tried to nice and give the company the benefit of the doubt, 'Out of Business' is your handbook to heavy-duty tactics to secure what's yours.Author Dennis Firey explains every dirty trick imaginable . Covering everything from telephonic assaults on a companies' call center to spreading rumor in the community to guerilla advertising and organizing smear campaigns, Fiery shows the average Joe how to bring even the largest of companies to their knees.What's more, Firey provides numerous examples of companies that have been successfully assaulted using the tactics he has described, including Starbucks Coffee, PepsiCo, Proctor & Gamble and many other well-known companies.Author Dennis Fiery says:"If your like most of us, and work for a business, you'll find out very quickly that you're very expendable, and that loyalty is a one-way street. Your boss expects you to give him two weeks' notice when you plan to change jobs. However, when it's time for "downsizing", you're lucky to get an hours' notice. Adding insult to injury is the increasingly common practice of having a security guard escort you to your desk, to make sure you're packing only your belongings, then out to the gate."
Trustpilot
Copyright © 2022 Thriftbooks.com Terms of Use | Privacy Policy | Do Not Sell My Personal Information | Accessibility Statement
ThriftBooks® and the ThriftBooks® logo are registered trademarks of Thrift Books Global, LLC