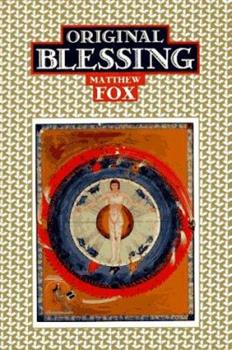 This description may be from another edition of this product. Here is a reissue of the critically acclaimed bestseller, named one of the "20 books that changed the world" in New Age Journal's Annual Source Book for 1995. Maverick theologian Matthew Fox provides...

A Holy Book - in the truest sense

Published by Thriftbooks.com User , 16 years ago
My copy of Original Blessing is falling to pieces as it's been read so often - I bought it some time ago from a church jumble sale, and I can't believe anyone could throw it out! This is a beautiful and deeply spiritual book and Fox is one of my great heroes, with others like bishop Shelby Spong and here in the UK Richard Holloway. All are 'post modern Christians' and would that the mean spirited, literalist homophobics/mysogynists who claim to speak for Christians everywhere would listen to them. If you think that the Christian message is all about sin and sado-masochism suspend your disbelief and read Fox's alternative account which truly honours the Divine Creator. Matthew Fox is a holy person and a great prophet and this is one of his best books.

Published by Thriftbooks.com User , 17 years ago
I'm not good at giving insightful reviews of anything. But I just had to say something about this book.I originally heard of this book while researching for myself alternate ways of approaching my Christianity. I had been raised in a very strict church upbringing and had long since lost any real enthusiasm for the denomination I had attended, as well as any I had attended since leaving home. With my upbringing as well as attending two separate Christian universities, it seemed to me that many people were missing at least one or two very important things ... perhaps more. ..when it came to how they viewed themselves in context to the rest of the world and even to God from within the shroud of Christianity. Eventually, I decided to go it alone, and tried to hammer out my own path: Hardly a new religion, but very much a new philosophy. One that worked, and inspired one to good works and a good life, and not just reward or bragging rights in a congregation's hierarchy of `most spirit filled people'. Certainly not one that lead to the sort of empty `righteousness' I was so used to seeing and hearing.(I had spent some time out and about in the world and with many sorts of people, and by the time I returned to my nice safe Christian home, my viewpoint had been forever changed.)When I first bought this book I had never heard of Fox, and I approached it with a level of polite skepticism; primarily because there are so many books out there in the genre of Christianity in general that finding a good one is almost a miracle in itself. Behold one such miracle. There is another review on this page (by FrKurt Messick-a top 100 reviewer, even!) that covers the sections of the book, so I won't go into that. I will say that due to untimely circumstances, it took me quite a while to read it in its entirety. But during that time, I had the opportunity to test and examine its contents: All very well thought, well researched. and true. Do not be fooled into thinking that Fox is trying to start a new religion-- Simply a new philosophy on the same religion. With the way the world is today, I feel that the contents therein are timely and perhaps even necessary for all to at least consider for a few moments. On completing Original Blessing early yesterday morning, years of uncertainty about myself in my faith had been banished. As an artist, minority, and admittedly unconventional thinker, I readily say that I needed the message of this book. I felt that finally, finally, someone had gotten something right. Not only that, but I was impressed that he was willing to share fully his insight, without watering it down to be more acceptable to the masses. Oddly enough, I take his defrocking as a sign that he had something important to say. I'm all too familiar with the practice of dismissing someone on the basis of their spiritual beliefs in order to hush them up. More often than not, the one dismissed blesses the ones he comes in contact with afterward. I will say that if

A revolutionary rediscovery of Christianity

Published by Thriftbooks.com User , 17 years ago
It's been a long time since I first read this book--almost twenty years--and I'd forgotten just how brilliant it is until I recently returned to it. If anything, my admiration for it this second time around has increased. I honestly think the book is one of the most original theological reflections to come out of the twentieth century.Like all works of genius, the thesis is simple and elegant. Fox's central claim is that Christianity in the west (not so much in the orthodox east) has focused upon the nonscriptural notion of original sin at the expense of scripture's exuberant message of joyful original blessing. Original sin, which appears to be the fifth-century contribution of Augustine, generates a worldview centering around a primordial fall salvaged by a bloody sacrifice (Christ's). From this way of approaching reality, humans are depraved, the world is fallen, and experiences such as beauty or the erotic are immediately suspect as temptations. The original blessing model, which Fox claims can be traced back to the Genesis account of God's creation of a "good" universe, argues instead for a panentheism that sees God--and God's goodness, light, beauty, and love--in (but not exhausted by) the created order, thereby opening up the possibility that humans are good because made in God's image, and that the world and all of God's gifts should be celebrated rather than condemned.Put slightly differently: the original sin model sees fallenness as the norm and goodness (which, given our depraved nature, is possibly only by grace, which in turn becomes a kind of magic bullet) the exception. The original blessing model sees goodness and continuous grace as the norms, and fallenness as the exception.Fox isn't naive. He recognizes that sin exists, and that it does great damage in the world. But he sees the cause of sin in dualism--the artificial splintering or fragmentation of God's reality into opposing and hence warring dyads--heaven and earth, eros and agape, man and woman, us and them, human and nature. This fragmentation not only violates the wholeness (and holiness) of creation, but sets in motion psychological and social currents that lead to violence.How different both Christianity and the world would be today had our foremothers and fathers counted their original blessings instead of morbidly fixating on original sin! Hopefully, the Church is becoming more aware of its forgotten identity. Please, read this book and discover a new and liberating way to live and think your faith.

Published by Thriftbooks.com User , 18 years ago
'Just to be is a blessing.Just to live is holy.'-- Abraham HeschelI first discovered the book 'Original Blessing' by Matthew Fox about a dozen years ago; originally published in 1983, it has become a widely read and used spiritual guide for many. My first experience of this book (and I do consider it a genuine experience) coincided with my first trip to St. Gregory's Abbey, a benedictine monastery with which I've maintained a connexion over the years. This book was a wonderful accompaniment for that spiritual retreat, and has remained a favourite book to be packed for reference and review each time I go on another.Fox has organised the book into four broad sections, or paths: Path I: Befriending Creation--the Via PositivaThis path explores creation, activity, beauty and justice, panentheism (the idea of God in everything), a sense of realised eschatology (something akin to the saying that 'the kingdom of God is in you'), incarnation and personal freedom and worthiness.Path II: Befriending Darkness, Letting Go and Letting Be--the Via NegativaThis path explores those things which sometimes get in the way, such as pain, emptiness, silence, negative things--however, new perspective is sought (for example, it is into the silence that God often speaks; without silence, the voice is not heard). This is perhaps the most beautiful part of the book for me at times, as it helps in times of trouble -- as Meister Eckhart states, 'Remember this: All suffering comes to an end. And whatever you suffer authentically, God has suffered from it first.'Path III: Befriending Creativity, Befriending our Divinity--the Via CreativaThis path is perhaps the most fun part of the book, as it engages the creative flow of art, music, conversation and writing. It explores how our lives as works of art bring beauty back into the world, and how creativity is a form of birthing that which was not here before. In a unique perspective, Fox uses an analogy of creativity as being co-creators of the cosmos with God.Path IV: Befriending New Creation--Compassion, Celebration, Erotic Justice, the Via TransformativaThis path shows the way of the future as a time that can be present, images of God in motion in the world and at work in people everywhere, and explores issues of process and liberation theologies which look for justice and loving community.Fox attributes the Via Positiva as being part of a theology of creation and incarnation, the Via Negativa as being part of a theology of the cross, the Via Creativa as part of a theology of resurrection, and the Via Transformativa as a theology of the Holy Spirit.Perhaps the one great theme that permeates all writing is that of life as a blessing. This is the original blessing, from which all other blessings derive. Fox calls on people to live prophetic lives, calling upon the works of historians, artists, writers, prophets, and others through the ages. These people have conversations with each other on the pages of this book, and a truly rem

Published by Thriftbooks.com User , 22 years ago
Fox presents his Creation-Centered theory of spirituality in an easy to understand manner. His ideas on spirituality apply to all religions and denominations. It is a very uplifting and positive way of interpreting our spirituality and existence in the spiritual world. His books also lays out what he refers to as "Paths" which we experience throughout life, and he gives insight on how to deal with, and grow from our experiences as spiritual people. I was also pleased that it focused on the positive aspects of spirituality, of life itself, rather than the sin and guilt that surrounded the beliefs of my Catholic upbrining. I gained a more thorough understanding of my place in life on earth from this book - it is one I will continue to reread throughout my lifetime.
Copyright © 2020 Thriftbooks.com Terms of Use | Privacy Policy | Do Not Sell My Personal Information | Accessibility Statement
ThriftBooks® and the ThriftBooks® logo are registered trademarks of Thrift Books Global, LLC