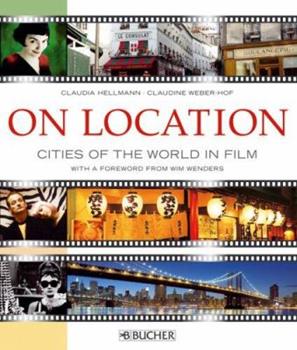 On Location: Cities of the World in Film

Many movies are synonymous with the locations where they were filmed. On Location is a lighthearted, round-the-world tour of famous movies so you, too, can go ?on location.' Exact addresses, review-style essays and city maps take you there, whether on a Harry Potter tour of London, a Breakfast at Tiffany's trip to New York, or a jaunt to the Rome nightclu [ where Matt Damon and Jude Law partied in The Talented Mr. Ripley. This richly illustrated volume...

Fun mix of travel and film

Published by Thriftbooks.com User , 14 years ago
I stumbled across this book in the film and TV section of a Barnes & Noble - what a wonderful idea! I can really recommend this book for anyone who loves the movies and wants to know where famous scenes were filmed. I always liked the idea of mixing travel and film, and that is what this book does. Basically it takes a look at big world cities and tells you which films "belong" to them. Harry Potter is really well covered in the London chapter. One of my favorites is the New York City chapter, because I love "When Harry Met Sally" and found out exactly where they filmed the famous orgasm scene. The Rome chapter was wonderful, too, especially for fans of Roman Holiday - even the exact address of the apartment where the two stars spend that first scandalous night was listed. Then there's Tokyo, and Prague, and Beijing, and it just goes on. The maps are useful, the photos are really stunning, and I found the texts fun and easy to read.
Trustpilot
Copyright © 2022 Thriftbooks.com Terms of Use | Privacy Policy | Do Not Sell My Personal Information | Accessibility Statement
ThriftBooks® and the ThriftBooks® logo are registered trademarks of Thrift Books Global, LLC