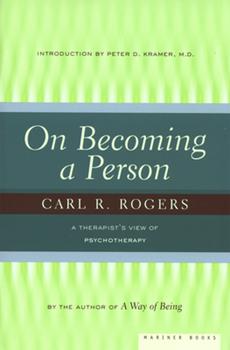 On Becoming a Person: A Therapist's View of Psychotherapy

A landmark book offering a therapist's perspective on psychotherapy??--??a must-read for anyone interested in clinical psychology or personal growth. Carl Rogers, founder of the humanistic psychology movement, revolutionized psychotherapy with his concept of "client-centered therapy." His influence has spanned decades, but that influence has become so much a part of mainstream psychology that the ingenious nature of his work has almost been forgotten...

Published by Thriftbooks.com User , 17 years ago
I was given this book in 1973 when I was a senior in college and wished to attend graduate school in clinical psychology. The book transformed me. I went from page to page recognizing that Roger's spoke directly to me and the way I experienced my relationship with my inner self and soul. This book review is written with the purpose of encouraging others to read this masterpiece of psychological theory. ALL psychiatrists, psychologists, counselors, and social workers should be intimately familiar with Rogers and his concepts. Of all the personality theorists and practitioners of psychotherapy such as Jung, Freud, Fritz Perls, Albert Ellis, Karen Horney, Harry Stack Sullivan, Eric Fromme, and Rollo May; Carl Rogers is the one infused with optimism and a belief in the goodness of mankind. He sees human beings as capable of vast growth and creativity; able to achieve ethical and loving relationships and encounters; and achieving a healed and healthy soul that directs us toward others and the world. Do not confuse his discription of the state of psychological health with that of William James, Clark Hull, or James B Watson. These theorists see man's natural state as homeostatic, neither alert nor asleep, neither happy nor sad. Rogers on the other hand would assert that the Buddha-like state of homeostasis is not full psychological health. Full psychological health is involvment, attachement, love, relationship, creativity, fulfillment, achievement, and goodness. Once the reader buys into Roger's Self Theory, which posits that we are self healing, self directed, and instinctively know psychological health from psychological disease; then he posits his therapeutic model by which the therapist facilitates the process whereby a client moves toward this wholeness. This method, client-centered psychotherapy, transformed the world of psychotherapy, education, medicine, and social services. The book gives a very thorough and insightful look at how Roger's developed his theory. There are connections between his self theory and Christianity, but these are implicit rather than explicit. Then, further into the book, Roger's explains the method he developed that seeks to facilitate personal growth. The method is not intrusive but faciliates the natural growth process of the client rather than takes on the world-view or paradigm of the therapist. The method is ethical and has minimal opportunity for destructive practices by the therapist,if practiced as Rogers describes. When you read this book you will understand why Carl Rogers is the most beloved of all the personality theorists. The phenomenologists who have examined Rogers believe that Rogers creates reality by facilitating the loving, healthy self in the soul of his clients. Well, if Rogers has created such a loving and affirming conception of mankind, then my hat is off to him for creating such a profound reality. I believe the existential-phenomenological concept that reality is a social constr

Published by Thriftbooks.com User , 20 years ago
As a student, the writings of Carl Rogers changed my life and view of therapy. I stopped worrying about techniques and other psychological constructs such the Id and Ego. After reading Carl Roger's writings, I started to focus on the person, client, and therapeutic relationship. Every person who is considering entering the counseling or therapy profession must read Carl Rogers. I have had the honor of hearing and seeing Carl lecture and demonstrate what he believed in vivo. Carl Rogers will go down in history one person who truly changed counseling and therapy.

Published by Thriftbooks.com User , 21 years ago
Welcome to the world of humanistic/existential psychology. This is the book I buy as gifts for close friends, as it has forever changed me. I too am amazed that as a clincal psychology doctoral student, this book is not a Required read in our program. If you've been considering reading about humanistic psychology or Carl Rogers, this is the book to start with! Easy read, beautifully written, and incredibly insightful. Once you read his work, you'll be hooked.

Could save a relationship or a life!

Published by Thriftbooks.com User , 22 years ago
This book does an excellent job of teaching a person how to behave in a relationship, so that each of the parties in the relationship can flourish. Recently, a friend of mine was feeling suicidal and the knowledge that I gained from reading this book, helped me to help them find an alternative solution to the problems they were having. On Becoming A Person is an owners manual for living.

A great Book by one of the greatest Psychologists.

Published by Thriftbooks.com User , 24 years ago
Carl Rogers was one of the first Psychologist's that challenged conventional interview psychotherapy. He makes you question many of the assumptions about what is to be human and disturbs conventional Psychologists who hold ideological positions about how to help people. He taught people how to listen to eachother by example. The book covers the preconditions necessary for individuals to take a look at themselves without becoming defensive in the process. He was the first psychologist who taped his interview sessions and suggested ways to improve one's skills helping others. Do not overlook this gem
Trustpilot
Copyright © 2022 Thriftbooks.com Terms of Use | Privacy Policy | Do Not Sell My Personal Information | Accessibility Statement
ThriftBooks® and the ThriftBooks® logo are registered trademarks of Thrift Books Global, LLC