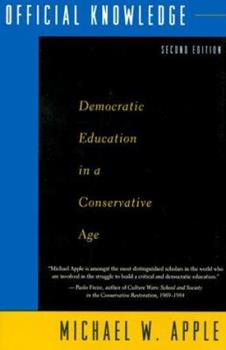 A powerful examination of the rightist resurgence in education and the challenges it presents to concerned educators, Official Knowledge analyzes the effects of conservative beliefs and strategies on educational policy and practice. Apple looks specifically at the conservative agenda's incursion into education through the curriculum, textbook adoption policies and the efforts of the private and business sectors to centralize its interests within schools...

Capitalizm is here to stay, Democracy is for those who can pay.

Published by Thriftbooks.com User , 11 years ago
"Offical Knowledge" is an incredible book which serves many purposes in the curriculum debate. Teachers who are feeling frustrated at the burgeoning, trivial official standards being dictated by State and Federal Government mandates will take heart to know that they are not alone. Teachers are trained for years to facilitate learning in their classrooms, but official knowledge is becoming a script. The only way for a new teacher to survive is to march lock-step to the dictates of agencies which are driven by political expediency. The capitalist masses (mob) are not interested in providing a relevant education to all children regardless of race, creed, national origin or socio-economic status. Unfortunately, this capitalist way thinking is so entrenched in U.S. society, and the symbolic solutions which Apple offers will never be adopted by the mob.

A must read for the educator committed to equity

Published by Thriftbooks.com User , 21 years ago
In the same school as dewey, ira shor and others thinkers who have been able to clearly describe the connections between democracy, access to schooling and the curriculum. A must read for anyone who thinks we have the right to question both the policies and the content of schooling!
Copyright © 2020 Thriftbooks.com Terms of Use | Privacy Policy | Do Not Sell My Personal Information | Accessibility Statement
ThriftBooks® and the ThriftBooks® logo are registered trademarks of Thrift Books Global, LLC