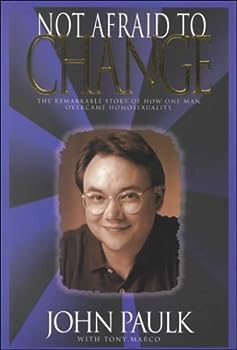 Not Afraid to Change: The Remarkable Story of How One Man Overcame Homosexuality

How One Man Overcame Homosexuality This description may be from another edition of this product.

Published by Thriftbooks.com User , 21 years ago
This is one of the best ex-gay books I've ever read. If you want to read an ex-gay book without a lotta bible verses, then this is the one for you. After reading this book, you will be able to understand the hows and whys of ex-gays and the ex-gay community, in general. The most active form of homophobia is reserved against gays when they attempt to exit the lifestyle -- they are almost always universally condemned by both straights and gays. Read this book and you won't feel intolerance against ex-gays anymore cos it helps you understand why some gays want to leave.

Published by Thriftbooks.com User , 22 years ago
I bought this book on a whim, because the paperback version was within my budget. I didn't think I would have anything in common with John, after all, I knew he had been a prostitute and a drag queen. However, I was pleasantly surprised. This book doesn't bore you with endless citations on Bible verses or lots of psycho-babble like many other books. He tells his story without leaving out the embarassing parts, he bares his soul for all to see and explains how he went through the recovery process, step by step. I can see why those so deeply entrenched and dependent on the gay lifestyle are so threatened by this book. I understand that John has even been inundated with death threats! The only criticism I would have for this book is that his life before age 18 is almost ignored. Thank you John for writing this book!

A book full of honesty, courage, grace, and hope!

Published by Thriftbooks.com User , 23 years ago
I couldn't put this book down! John's first book is a tell all. And tell all he does--in a wild ride full of honesty, courage, and ultimately--hope. Strongly graphic, though not sexually explicit, it documents his whirlwind life from his first timid visit to a gay bar at eighteen and follows him through his many tumultuous relationships, his descent into drugs, alcohol, and compulsive sex, his career as a high-class male escort, and his transformation into the legendary beauty, "Candi." According to the standards of his gay community, he had it all--yet as he looked into the mirror one night he thought, "There has to be something more." John found that "something more" in a personal relationship with Jesus Christ and in a long, difficult, yet rewarding journey into emotional healing, wholeness, and freedom. John asked God for only three things: marriage to a former lesbian, a child, and that God would "use our story to blow the world away." John gave God his life; God gave John all three.

Fascinating -- could not put the book down.

Published by Thriftbooks.com User , 23 years ago
I have not yet met John, but am related to him by marriage. My sister is John's step mother. I recently visited my sister and his father and had a chance to meet some of John's relatives. While there, John's father gave me his copy of John's book to read. I could not put it down, staying up late for two evenings to finish it.John's story is told with a frankness I've seldom seen. He is candid in sharing his feelings and activities. We see John progress from homosexual to escort, to drag queen, to change program participant, to counselor to husband and father. All along the way, he continues to search for unconditional acceptance and a love which will never leave him. His self-searching and honest appraisal of his inner feelings reveals the emptiness of the life he was leading.I shed tears many times during my reading of this book. While the main focus is on him finding God's will for his life, John's story is also one of relationship healing. I was especially moved by the way he described the progress of establishing a close relationship with his father after his parents divorced while John was very young. As a father myself, I can relate to the desire for closeness between a father and son. He also recounts the same kind of relationship rebuilding with his mother. Perhaps I'm a bit old fashioned, but I enjoy happy endings.Whatever you might think about the causes of homosexuality and your religious preferences, I think you will enjoy this story as it describes one person's search for happiness and fulfillment. I highly recommend this book and am purchasing extra copies to give to my son and my friends. William A. Cox

What an incredible example of God's power to change!

Published by Thriftbooks.com User , 24 years ago
John very openly, and sometimes graphically, shares his life. It is his life story, but is an example of how GOD can change anyone's life.His story is outrageous - no question (the average life story does not include a background of prostitution or being a beautifully popular drag queen) - but I was struck by how his path is not so different from many other people: A child, torn by his parents divorce.... a young adult seeking validation and gratification in drugs and indiscriminant sex.... an individual in search of a lover that wouldn't leave.... John goes a step further to show readers that his life radically changed when he opened up to God. It really is a love story. John had become painfully aware that the places he went and the things he did in his pursuit of fulfillment were temporary, empty and lacking. All through his life God was screaming, "I LOVE YOU!", but John was covering his ears. When he accepted God's love, he found his heart ! moved in different circles. He had finally found the love that would never leave him.I was very touched by the story of his courtship to Anne. I found myself unexplainably in tears when I read of the healing of his relationships with his parents.Thank you, John, for your story and your example that God can change even a messed up heart. Truly an inspiration.
Trustpilot
Copyright © 2022 Thriftbooks.com Terms of Use | Privacy Policy | Do Not Sell or Share My Personal Information | Accessibility Statement
ThriftBooks® and the ThriftBooks® logo are registered trademarks of Thrift Books Global, LLC