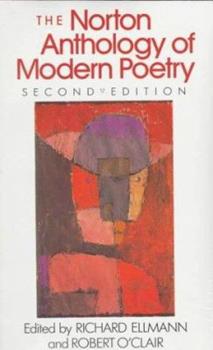 The Norton Anthology of Modern Poetry

Works by American and British writers illuminate the development of modern poetry.

Published by Daniella , 1 year ago
I was disappointed to not receive the second edition, but rather what I believe to be the first. I don't see the point in advertising the second edition and then providing another edition. I understand that the title itself doesn't specify which edition but the image does, and it would be nice to have a note that it could be either edition.

Published by Thriftbooks.com User , 17 years ago
It encompasses a staggering amount of poetry out there, and is the perfect introduction to poetry.

Published by Thriftbooks.com User , 20 years ago
If you access the reviews of this work at this site,then you had better be prepared to try to figure outwhy the other reviewers have written what they have written. The collections of poems for each poet, and theessay introductions are both excellent. People whodon't know poetry or poets might not find themhelpful, but for knowledgable readers of poetry,this Norton Anthology is of high quality, indeed. I especially like the Norton editions' excellentfootnotes. Here is a footnote to Yeats's poem"To the Rose upon the Rood of Time." "The rose, asan image of transfiguration and fulfillment, is afrequent symbol in Yeats's poetry of this period[1892]. In a note dated 1925, he remarks of it'that the quality symbolised as The Rose differsfrom the Intellectual Beauty of Shelley and of Spenser in that I have imagined it as sufferingwith man and not as something pursued and seenfrom afar.' The title indicates, and line 12confirms, that the rose is here eternal beauty, which flowers from the cross of time and sacrifice."(p. 113) I think that note is extremely insightfuland helpful. Of course, it also helps greatly ifyou know who Shelley and Spenser are (and were),what types of works they wrote, and what theirmost famous works and themes are. If you havenot had that intellectual and educational background,then, of course, the note will seem meaningless.This is an anthology which can be read by scholarsand enthusiasts. Read the poems for their wealthof value and tones and visions -- read the notesand the introductory essays for insightful,meaningful information about the poets, their lives,their struggles, and their accomplishments. My own favorites in the anthology are: EmilyDickinson, Thomas Hardy, A.E. Housman, some ofW.B. Yeats, Edgar Lee Masters, Edwin ArlingtonRobinson, Ezra Pound, H.D., Siegfried Sassoon, Robinson Jeffers, T.S. Eliot, and Wilfred Owen.Of course, there are many more poets and poemsthan these that appeal to me personally. Here is a brief excerpt from the beginning ofthe essay on "Emily Dickinson": "Modern Americanpoetry [in this anthlogy there are both Americanand British poets arranged chronologically accordingto their birth dates] -- an expression meaning almostthe same thing as 'American poetry' -- has for oneof its founders and ancestral presences a woman.Emily Dickinson wrote poems which are not only excellent but lend a standard of excellence. She isbracketed with Walt Whitman because, unknown to eachother and almost simultaneously, they all but inventedAmerican poetry." I cannot understand why anyone could not find thathelpful as the beginning of an insightful analysisof the poet, her poetry, and her influence.

Published by Thriftbooks.com User , 23 years ago
Having been weaned as an English major on the Norton Anthology of English Literature, vol.'s 1 & 2, (Abrams), I expected this anthology to lead me through modern poetry with the same sure hand as the previous Norton anthologies had. At first glance, this tome would appear to be superbly equipped to do just that; containing an overwhelming 1580 poems, at over 1800 pages, spanning a time period from Whitman (b. 1819) to Cathy Song (b. 1955), and featuring scores of poets I have never even heard of, it offers, if nothing else, the convenience of finding in one place a huge variety and depth of modern poetry.I do not fault the poetry itself (though they harbor a healthy number of typographical errors). It is in the editing that this book falls down. The Abrams editions I knew and trusted in college embodied a severe utilitarian scholarliness; no superfluity or self-indulgence is to be found anywhere within their thousands and thousands of pages. The introductions and footnotes are above all useful and necessary.Not so with Ellmann's tome. The introductions all too often are marred by verbosity, self-indulgence, impressionism, a distinct paucity of hard data, of biographical and historical fact, and, worst of all, offer no real insight into the poems at hand as much as distract from them. In too many instances the commentary contains more words than the work commented upon, which makes one suspicious that the academics who wrote them were trying to steal the show, were in fact, er, full of themselves.The contrast in treatment between poets included previously in Abrams's Anthology of English Literature and those found only in this one is telling. The former benefit from conciseness and informativeness obviously borrowed, often actually word for word, from the Abrams volumes. The latter fare much worse. In other words, this work does a much better job of treading well-worn paths than striking out on its own into new territory.I fault the font used, as well. It is too small and makes for eye strain. There is more empty space on the pages than print, again in contrast to the Anthology of English Lit. I suspect this may be the result of the aseptic minimalism of modernism, which often strikes me as a transmuted death wish, a wish to disappear. The chatter of the contributing editors,however, where this modern asceticism might have produced happier results, seems immune.
Trustpilot
Copyright © 2022 Thriftbooks.com Terms of Use | Privacy Policy | Do Not Sell or Share My Personal Information | Accessibility Statement
ThriftBooks® and the ThriftBooks® logo are registered trademarks of Thrift Books Global, LLC