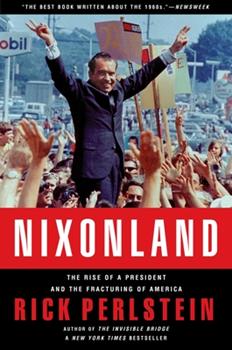 Nixonland: The Rise of a President and the Fracturing of America

"Perlstein...aims here at nothing less than weaving a tapestry of social upheaval. His success is dazzling." -- Los Angeles Times "Both brilliant and fun, a consuming journey back into the making of modern politics." --Jon Meacham " Nixonland is a grand historical epic. Rick Perlstein has turned a story we think we know--American politics between the opposing presidential landslides of 1964 and 1972--into an often-surprising and always-fascinating...

Published by Thriftbooks.com User , 13 years ago
When my father was alive, he used to love reading books by people like David Halberstam and Robert Caro because they wrote long, well-written, detailed works that were driven almost entirely by compelling narrative. Rick Perlstein has done this kind of book one-better. Nixonland is just as good as anything David Halberstam ever wrote, but it's also driven by an argument that's highly relevant to today's politics. Perlstein argues that Richard Nixon is the founder of modern attack politics, positive polarization is the way they described it back in the day. [That's positive in terms of the electoral fortunes of the Republican Party.] Perlstein doesn't make that argument explicitly until the very end, but you can see it coming a mile away and by the end of the book it's a very hard point to contest. In order to make this argument, Perlstein has to do what some historians might deem impossible, examine Nixon without considering Watergate. "Impossible!," you say? Not if you cut off the story with the 1972 election. Of course, some of the stuff that eventually brought down the administration (like the Watergate break-in itself) makes it into the narrative, but Perlstein's focus is more on the political culture of 1964-72 than it is on Nixon himself. When you look at that culture closely as he does it's hard not to conclude that it's just as toxic (if not more so) than our own. I've read some reviews of Nixonland here that complain about it being bogged down in trivia - That it all adds up to nothing. To make that argument is to miss the entire point of the book. Richard Nixon's political strategy, indeed the entire political strategy of the Republican Party since Nixon, has been to make mountains out of cultural mole hills in order to obscure the fact that Republican positions do not match the positions of the majority of American voters. It also helped that Democrats often haplessly played their Republican-cast part of aloof elitists so well. Perlstein does not spare them the criticism they deserve. He even criticizes people who are often treated like sacred cows in democratic circles such as Robert Kennedy. Republicans who criticize Nixonland for partisanship haven't a leg to stand on. By taking Watergate out of the Nixon administration, Perlstein has allowed us to see history as it unfolded rather than to read Watergate backwards. Unfortunately for Nixon lovers everywhere, this course of action makes it abundantly clear what an unpleasant, amoral, and divisive figure Richard Nixon was even before he betrayed the sacred trust of his high office.

An Important and Magisterial Work

Published by Thriftbooks.com User , 13 years ago
A lot has been written over the past week about Barack Obama's historic run for the presidency, and Hillary Clinton's historic near-run, and the assassination of Bobby Kennedy 40 years ago, and the general consensus seems to be that we are living in historic times, and that this coming election year is shaping up as one of those watershed-type moments in our history---like 1968, or 1932, or 1876---when the nation finds itself at a kind of directional crossroads and confronted by two radically divergent visions of the nation's future, where the choices we make at the polls this time around could affect the political landscape, in many profound ways, for decades to come. It's a little ironic, then, that I've been ploughing through this way cool book the past few days as it revolves around the pivotal '68 election and the rise of the modern conservative dialectic that has dominated our national politics from the end of the 1960s to the present day. It is a sobering yet fascinating invocation of an inchoate and messy time of mass discontent in the midst of mass prosperity, with lessons to ponder for the present day, and with sparkling insights and novel interpretations for the reader to digest in every chapter. Not a lot of people come out of Nixonland looking very good. Gene McCarthy emerges as cold, aloof, a single-issue candidate more interested in poetry than politics. Robert Kennedy appears as a polarizing opportunist who, Perlstein strongly implies (using statistical polling data), would likely have lost the '68 election in a landslide had he lived to secure the Democratic nomination. Hubert Humphrey is an insincere groveler, Nelson Rockefeller a Kissingerian double-dealer, Ronald Reagan a narcissistic martinet, and Richard Daley an American Brezhnev. (Perlstein reminds us that Soviet tanks were rolling through Prague at the same time the Chicago police were committing mass muggings in Grant Park at the '68 convention.) And the sins of the usual peripheral wingnuts---the Lester Maddoxes, the George Wallaces, the Max Raffertys---are all revisited in detail, and they are as horrifying as ever to recall. But a great many folks on the antiwar left, too, are depicted in less-then-flattering terms: Tom Hayden, Jerry Rubin, Eldridge Cleaver, and the SDS and Black Panthers in general all come in for some pretty harsh criticism---in Perlstein's estimation, much of their rhetoric and actions in the run-up to the '68 convention were at best examples of immature delinquency, at worst cases of outright thuggery, and needlessly provocative as a rule---and given the wisdom of 40 years' hindsight, it is hard to argue that a great deal of this criticism isn't richly deserved. And this calls into focus the uniqueness of Nixonland---it's the first detailed history of American politics in the 1960s that I am aware of to be written by someone who was born after its most formative events took place. To the new generation of historians like Rick Perlstein (b.

Another worthy effort from Perlstein

Published by Thriftbooks.com User , 13 years ago
Nixonland is Rick Perlstein's follow-up to "Before the Storm", which focused largely on Barry Goldwater's 1964 campaign. Though I preferred Perlstein's earlier book this one is pretty damn good. I was born in the 1980s and thus have no first-hand knowledge of what was going on in the 60s and early 70s. Perlstein does a very good job at drawing a vivid portrait of the state of the union at that period. After reading this book, I felt like I had learned a thing or two about why things happened the way they did--why the backlash against civil rights came about, why conservatism reemerged as it did after Goldwater's disastrous campaign, why Nixon managed to become so popular and how he helped define the political landscape. The book doesn't quite manage the cohesion of its predecessor, though Nixonland manages to paint an accurate and messy picture of America during the Nixon era. It's quite readable, and the detail on display here is impressive.

Love him or Hate him Nixon was no Dummy

Published by Thriftbooks.com User , 13 years ago
This is a four-part story of Richard Nixon's reign. Each section is devoted to one of the four elections of 1966, 1968, 1970 and 1972, and thus it is a political history that attempts to capture and make sense of the temper of those turbulent and changing times as seen primarily through Richard Nixon's character. In this sense it parallels Oliver Stone's biopic called "Nixon." When Nixon prepared to make his second run at the Presidency, Vietnam had ignited a rage in the nation's young. This rage intersected with the cultural cross currents of the quickening pace of the civil rights movement and the rise of leftwing radical groups. Many conservative whites thought the wheels were coming off the nation morally and culturally. Nixon, seen by many at the time (and since by historians), as a tragic but brilliant figure, wore his deep felt hurt, anger and anxieties on his sleeve for all to see, but despite this he was judged (and proved to be) a smart political tactician. Perlstein's story centers on Nixon's character and how it proved to be a critical factor in shaping both domestic and foreign policy during his reign and in the process being responsible for making fundamental realignments in American domestic politics as well as changing the course of U.S. foreign policy with his ground breaking overture to China. During the first part (1966), reading the tea leaves left by Reagan who had recently won the California governorship on a new "law and order" platform, and encouraged by a resounding defeat of a host of liberal LBJ legislation -- by essentially the same "law and order coalition" -- Nixon could see where the future was headed and plotted a course that he hope would set the troubled nation on a more even keel and get him elected in the process. He did indeed win in 1968 (the second part of the book), with a narrow victory ensured only by the reactionary coalition of former Southern Dixicrats and incensed culturally conservative Republicans -- the very coalition he had set his mind on colonizing. Nixon saw that this "new reactionary white power" was going to be the Republican ticket into the future, and the answer to his prayers for a more robust if not a permanent republican congressional majority. So he put his plan into action, and succeeded in effect breaking up the liberal coalition that had existed since FDR's presidency. Nixon's "so-called" Southern strategy, as immoral and as illegitimate as it may have been (its subtext was clearly to play the race card), lives on even in today's "Red and Blue" political alignments. And although I was not a Nixon lover, Perlstein has given Nixon his just due, and the man, his character flaws and all, reveal that he was indeed a shrewd American politician. Five Stars

Are We Still In Nixonland?

Published by Thriftbooks.com User , 13 years ago
I'm 49 years old, not quite old enough to have a first hand memory of the events and forces covered in this book but I still feel like I've been living in Nixonland all my life. I've read hundreds of books about the 1960's (and the early 1970's, often confused with the 60's) and this is the best. If you fell asleep in 1965 and just woke up and wanted to understand politics and culture today, I'd tell you to read Nixonland before I introduced you to "blogs" or even the 1990's. It takes time to make sense of such a defining era. It's a heck of a page turner too, no one ever said that the period between 1965 & 1973 was boring! Perlstein does a great job of weaving 1960's popular culture into the story but not in a trivializing way. Even if you are, say, 25, you live in Nixonland too. Like me you grew up with music from Nixonland, TV shows from Nixonland, a culture from Nixonland and, of course, politics shaped and defined by Nixonland. I agree with the author that we are still fighting pretty much the same battles that were first thrust upon the national stage in the form of Richard Nixon and others like RFK, Ronald Reagan, Barry Goldwater and George McGovern who make up the characters in this grand story, all the wierder because its all true. I honestly think, however, that the 2008 election might just mark the beginning of a new era. Some of these battles are getting old. I think we are heading out of Nixonland but we are not there yet. If you want to know where we are and how we, as a country, got here, Nixonland is the place to start.
Copyright © 2020 Thriftbooks.com Terms of Use | Privacy Policy | Do Not Sell My Personal Information | Accessibility Statement
ThriftBooks® and the ThriftBooks® logo are registered trademarks of Thrift Books Global, LLC