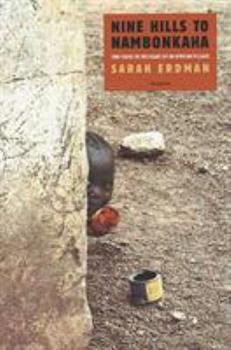 Nine Hills to Nambonkaha: Two Years in the Heart of an African Village

The village of Nambonkaha in the Ivory Coast is a place where electricity hasn't yet arrived, where sorcerers still conjure magic, where the tok-tok sound of women pounding corn fills the morning air like a drumbeat. As Sarah Erdman enters the social fold of the village as a Peace Corps volunteer, she finds that Nambonkaha is also a place where AIDS threatens and poverty is constant, where women suffer the indignities of patriarchal customs, and where...

Next best thing to being there

Published by Thriftbooks.com User , 18 years ago
I want to congratulate Ms. Erdman on her book and her Peace Corps experience, and for being the sort of person that made both possible. The book is the best Peace Corps memoir I have read. I was a Peace Corps volunteer for three years in northern Togo (Sansanne-Mango) in a similar ecological and cultural environment (small, pre-electrification village; predominantly Muslim). To me, just about every word of Erdman's narrative rings true. I thank her for bringing it all back so vividly (I served 1980-83). Language footnote: in Togo, yam "foutou" is "foufou" and millet beer, "chapalo" is "chakpalo." I could not disagree more with the notion that the book was not "personal" enough. In my experience, many Peace Corps volunteers understandably spent a lot of time focussed on their own reactions to their experiences. Fair enough, but then some had the presumption to think that the rest of us would be interested in reading about them. Erdman, in contrast, stays in the psychological background enough to let the people she is writing about show themselves more clearly, and thereby reveals herself in a way that to me explains her apparent success as a volunteer. It is of course true that the Peace Corps is a combined personal voyage of discovery/cross-cultural experience. When attempting to write a memoir about it, focussing too much on the former tends to distort the interpretation of the latter. I prefer Erdman's approach. If you want a better sense of village life in this part of Africa than provided in Nine Hills, you're going to have to spend a couple of years there yourself. Peace. Chuck Manning Seattle

Experience the Culture/Politics/Life in an African Village

Published by Thriftbooks.com User , 18 years ago
Experience the sights, sounds and rhythms of an African village as Sarah Erdman, armed with a four year US college degree and three months of training to be a healthcare worker ... describes two years of her life spent with the Peace Corps, in Nambonkaha, on the Ivory Coast of Africa. Ms Erdman proves up to the task of learning the customs/traditions of the village, utilizing the protocols of local politics to achieve her goals. She is understandably irked/outraged by the concept of embezzlement (" bouffer") that is rampant wherever government funds/large business transactions occur. She is touched to the core by the village's response as they present her with gifts ("cadeau") when she runs out of funds while her house is being built. Sarah Erdman proves to have an indominatable spirit and courage to face the tasks and challenges before her ... she wants to make a difference in the lives of this village. She understands the realistic obstacles she faces. The main tangible obstacle is lack of funds, making due with what is available and the realities of poverity. The intangible obstacles are local customs, cultural beliefs and the religious underpinnings of animism despite the outward stated religion of Islam (Muslim). Working within the system, Ms Erdman recognized she could not change long-standing social norms and life-styles. She accepted polygamy and the problems associated with raising an extended family. Certain social norms/duties were ingrained in the culture that can not be changed despite the fact they created deeper problems for the survival of individuals and society as a whole. One man in the village was obligated to accept the widow of his cousin as his fourth wife. It was an unquestioned duty and norm for him to receive the widow of his brother or cousin as his wife. It was a benefit to him and his family to have more wives who provide for more workers to farm the local cash crop, raise the children within the family, and who provide needed help and respite for the other wives during their pregnancies. The new wife had a beautiful doe-eyed baby who developed fevers and a rash called "boutons" ((English, "buttons"). When the routine of antibiotics did not cure the fever ... AIDS was suspected and confirmed. Essentially, the social obligation of accepting the new wife (who did not know she had this disease) became a death sentence for this husband and all of his wives. Perhaps, the children will survive but *only*if precautions are followed (known).... they would be accepted into *another* extended family, after their parents died. This is one example of the cycle of illness/death/despair/poverty which is difficult if not *impossible* to break and overcome despite the help of outsiders. The ultimate reality is: the villagers themselves need to change and break the cycle. Ms Erdman asks the BIG QUESTION, "How do you promote behavior change so that people have more control over the state of their bodies but stop atthe threshold wher

Published by Thriftbooks.com User , 18 years ago
I couldn't agree less with the reviewer from Atlanta. Sarah Erdman's book is beautifully written and is compelling throughout. As for the reviewer's perception that she stood around and let people do things: What book did you read? Also: A goal of many aide organizations such as the Peace Corps is often to hold the lamp, not always to chop the wood. If aide workers do this, what would be learned? What would happen when they leave? When Erdman left her beloved Nambonkaha, the life skills she taught continued. I couldn't put this book down and congratulate the writer on her excellent perceptions about human nature and Africa. I love her writing style, and ability to capture the personalities of her friends in the village. Can't wait for more.

A Wonderful Tale of Two Years in Sub-Saharan Africa

Published by Thriftbooks.com User , 19 years ago
This was one of the best books I have read in a long time. It was touching and refreshingly personal. Sarah struggles with issues familiar to all development workers - "How do I instigate behavioral change now that I have disseminated the information?" She doesn't have the answers, but some insights, which only come from living so closely with a community. She shares these thoughts and the people of the village with her reader, avoiding clichés and stereotypes. As a former student of economics and having worked in community development overseas, I feel that this book is must read for individuals in these fields. Sarah lets you in the secret obstacles to capitalism not found in textbooks and defines the role of a successful development worker - bringing out the best of those in the community so that "progress" comes from within, not from a temporary outsider. Of course, I would highly recommend this book to prospective Peace Corps volunteers, or those who have always wished they had volunteered as well; you will truly be transported to Nambonkaha, Côte d'Ivoire.

The best book I've read in a long time

Published by Thriftbooks.com User , 19 years ago
I read alot...2000+ pages per week. Much of what I read I find is either badly written or not emotional stirring--fiction and non-fiction. I picked up Nine Hills to Nambonkaha on a lark this summer--my local bookstore invited me to pick from their advanced reading copies which would go otherwise unread. Within three pages, I was living in the Cote d'Ivoire with Sarah Erdman. Not only is this an incredibly absorbing account of Ms. Erdman's stint as a Peace Corps worker but (gasp) it is beautifully written and (gasp, gasp) accessible to all. If I was giving Pulitzer's this would be it. Go read it.
Trustpilot
Copyright © 2022 Thriftbooks.com Terms of Use | Privacy Policy | Do Not Sell or Share My Personal Information | Accessibility Statement
ThriftBooks® and the ThriftBooks® logo are registered trademarks of Thrift Books Global, LLC