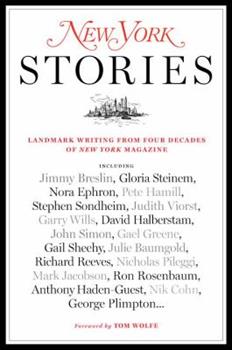 The magazine that is the city that is the world Just in time for its fortieth anniversary, New York magazine presents a stunning collection of some of its best and most influential articles, stories that captured the spectacle, the turbulence, and the cultural realignments of the past four decades. Covering subjects from "Radical Chic" to Gawker.com, written by some of the country's most renowned authors, here are works that broke news, perfectly...

Published by Thriftbooks.com User , 12 years ago
You know that old chestnut..."I just couldn't put it down"? Well it applies to my experience with this amazing chronicle of the cool, the bizarre, and the fascinating. And all three apply to the first story by Tom Wolfe who takes us into a party hosted by Leonard Bernstein for the Black Panthers. This, like many of the stories, go back a few decades in the magazine's history and time and space have improved the tales. Pete Hamill provides a gritty account of class struggle and the now famous, The Secret of Grey Gardens, tells the story of Bouvier relations and their living conditions in the Hamptons which became the basis for a documentary and Broadway musical. Comedy Isn't Funny is a snapshot of Saturday Night Live in one of its lowest periods and the result is a sad and hollow picture. I remember reading Hard To Be Rich when it came out in 1988 and credit it with prompting me to read every book on 1980's largesse and greed that has appeared since. The Crack In The Shield haunts you and offers more questions than answers on the subject of corruption. Henry Hill is profiled in Wiseguy which became Goodfellas and the creepy duo of Sid and Nancy do provide a nauseating love story. There are many more and all are entertaining showcasing that very unique New York style of essay writing. I recommend it for enjoyment and for gaining a clearer picture on recent cultural history.

Must Read for any Literary Lover

Published by Thriftbooks.com User , 13 years ago
This was a required book for one of my journalism classes. I highly recommend it for journalists and anyone interested in reading works from some of the best writers of the past four decades. To read more about what I think of the book, visit my blog! [...]

a can't put it down kind of book

Published by Thriftbooks.com User , 14 years ago
If you needed any proof, here are several dozen reasons why some of the best writing and journalism of the past four or more decades were to be found in the pages of NEW YORK magazine. Tom Wolfe's memory-filled foreword and ode to founding editor Clay Felker is worth the price of admission alone. But you don't need to live (or have lived) in New York to appreciate takes from Kurt Andersen on George W. Bush (and George H.W. Bush), Julie Baumgold on (the real) Truman Capote, Susan Berman on Bess Myerson (and Ed Koch), Jimmy Breslin on Joe Namath (and running for office with Norman Mailer), Michael Daly on "a good man who became a bad cop," Nora Ephron on cooking Julia Child, Steve Fishman on the post-9/11 "Dead Wives Club," Vanessa Grigoriadis on Gawker, Gael Greene on how to eat at snob restaurants, David Halberstam on Spiro Agnew, Pete Hamill on the white lower middle class circa 1969, Anthony Haden-Guest on Dr. Herman Tarnower (and Jean Harris), John Heilemann on John McCain (and Bob Dole and Hillary Clinton), Gary Indiana on life in the East Village, Mark Jacobson on "the king of prostitution," Joe Klein on race (and Bill Clinton), Ariel Levy on female chauvinist pigs, Nicholas Pileggi on the mob, George Plimpton on "the writer from Philadelphia" Jerry Spinelli and a visit to Elaine's, Richard Reeves on Jerry Ford, Nancy Jo Sales on pen-paling with Woody Allen, Jennifer Senior on Senator Barack Obama, John Simon on booing for a living, Chris Smith on a "comedy isn't funny period" of Saturday Night Live, Stephen Sondheim on crossword puzzles, Gloria Steinem on black power, women's liberation (and Richard Nixon, alone in a room), John Taylor on John and Susan Gutfreunds during the "gilded age" of Wall Street, when it was "hard to be rich," and Gary Wills on George Wallace (but really on Jimmy Carter). There isn't a bad story among this collection.
Trustpilot
Copyright © 2022 Thriftbooks.com Terms of Use | Privacy Policy | Do Not Sell My Personal Information | Cookie Preferences | Accessibility Statement
ThriftBooks® and the ThriftBooks® logo are registered trademarks of Thrift Books Global, LLC