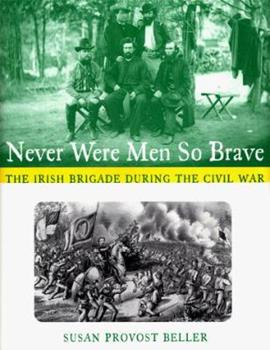 Never Were Men So Brave: The Irish Brigade During the Civil War

This description may be from another edition of this product. More American lives were lost during The Battle of Antietam than any other one-day battle in history before or since. Among the killed and wounded were 535 members of the Irish Brigade, a unit known...

Published by Thriftbooks.com User , 21 years ago
Never Were Men So Brave by Susan Provost Beller, 1998. This is a short book, (98 pages) intended for a younger audience, while providing a well-written and very complete history of this famous unit. Any person of Irish descent would be happy to own this book. Susan Beller records the glory garnered by the Irish Brigade in some of the most decisive and heaviest battles in the Civil War. Ms. Beller addresses the proven bravery displayed by the actions of the Irish Brigade, (made up of the 69th New York, 63rd NY, 88th NY and the 29th Massachusetts) at decisive battles, and she gives vivid descriptions of the actions of the Brigade through some important characters such as General Thomas Meagher (pronounced MAAAHer). For example, at the bloodiest single day in American history, September 17th 1862, Susan Beller not only tells the story of the vital contribution of the Irish Brigade at the "Bloody Lane", but tells how, when they ran out of ammunition, the Irish Brigade "right-shouldered arms" and marched away in good order from the enemy. She also describes how shaken General Meagher was when his horse was shot and subsequently fell on the General. In this brief book, Ms. Beller provides a complete synopsis of the life of the Irish rebel, Meagher, from his early days in Ireland to his exile in Australia and finally his escape and settlement in America. She also describes important historical events, such as the famous "general absolution" given by Chaplain William Corby. Either one of these individuals would make a fine central character in a movie about the "Irish Brigade"; .... The Irish Brigade, as Ms Beller relates, was involved in some of the most important Civil War battles, and were so effective that it caused Confederate General Robert E. Lee to state, "Never were men so brave", from which the author draws her title. Perhaps Mel Gibson might consider such a movie
Copyright © 2020 Thriftbooks.com Terms of Use | Privacy Policy | Do Not Sell My Personal Information | Accessibility Statement
ThriftBooks® and the ThriftBooks® logo are registered trademarks of Thrift Books Global, LLC