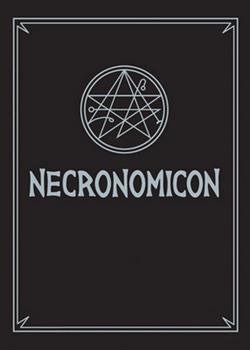 In the past 31 years, there has been a lot of ink - actual and virtual - spilled on the subject of the Necronomicon. Some have derided it as a clumsy hoax - others have praised it as a powerful grimoire. As the decades have passed, more information has come to light both on the book's origins and discovery, and on the information contained within its pages. The Necronomicon has been found to contain formulae for spiritual trans-formation, consistent...

Published by Prophet one , 1 month ago
The origins on how it became what it is and who’s behind the mystery, It’s a very interesting book. Makes u think.

Published by Jonscott , 1 year ago
It’s always good to read different illustrations by different people to get a good open mind of what it is that we are searching for

Real or Fake... does it really matter?

Published by Thriftbooks.com User , 15 years ago
Real or fake the Simon Necronomicon is a worthy read. What makes a magical practice real? The books attached to it or the belief in its power to the person / persons practicing the magic? Any good magician will tell you the same thing, power comes not from the physical but from the mystical.. YOU contain the magic all else are trappings designed to focus your energy. The Simon Necronomicon does just this, it "tunes" you in on a part of power that is as ancient as is is mysterious. Was it "invented" by HP Lovecraft, possibly, but I tend to believe no. Do we dismiss the Bible and say it is fictional because it has been used as a plot in more than one writers fictional book? No, we don't. My advice, use it.. Decide for yourselves. All "practices" began somewhere with someone. Abraham started Judaism, Mohammad started Islam, sever thousand other Ministers began their respective Christian congregations... Whether Simon found the Necronomicon or Lovecraft "invented" it, its here now, and from the looks of things it is here to stay.

fake, offcourse, but a great read

Published by Thriftbooks.com User , 16 years ago
For god's sake people, there are a few morons that believe this is real, and immediately hundreds of people insist on proclaiming their superiority by acting shocked that 'so much' people believe in its authenticity. Ofcourse this is fake, but it's nicely written, just a great read for anyone who likes lovecraftian stories. Nothing to go bonkers over, chill out already.

You people are missing the point.

Published by Thriftbooks.com User , 16 years ago
OF COURSE THE BOOK IS FAKE! OF COURSE THERE IS NO REAL NECRONOMICON! It wasn't written to fool you, it's just for fun! So you can say "I have a copy of the Necronomicon!" It's a prop! It's not a hoax, it's not a religious text, it's not a "real" grimoire. It does, however, read like a "real" hermetic, enochian, or kabbahlistic spellbook. Many of the same themes are present, the seals and gates correspond directly to the kabbahlistic sephiroth, for instance. The two main differences here are. 1. The Sumerian pantheon is used instead of a Hebrew or Greek pantheon 2. The books is much darker and forboding. The reason for spellcasting here is not to advance in your workplace or get a new lover, as in most modern "real" spellbooks, instead it is supposed to be used to gain power from the "Elder Gods" (the good guys) to keep "The Ancient Ones" from destroying the mortal world. The beggining and ending written by "The Mad Arab" are a great homage to Lovecraft. This is for entertainment. If you like the way you get scared reading Lovecraft's stories, you might like to read this book. If you love occult sigils you will love this book. If you're writting horror or fantasy stories, you might find this book useful as inspiration. If you want to learn a bit about Sumerian mythology (you know, MARDUK, slayer of TIAMAT, and all that), there's some of that in the introduction too. I really enjoyed this book. Actually the "real" Necronomicon is "The Egyptian Book of the Dead" which is a pretty complete translation of hieroglyphs from the papyrus of ANI which, written about 1500 - 1400 BCE. and aquired by the British Museum in 1888. This book won't give you magic powers either, but it's an authentic religious text.

For those of you who want to believe

Published by Thriftbooks.com User , 21 years ago
I tell you, I owe this book a great deal. It gave me an interest in Mesopotamian Theology that I have kept for 10 years now. I discovered the Necronomicon in high school, and it is, most certainly, a fabrication. But it's a pretty good fabrication, I'll give it that. Now I have never read any of Lovecraft's works, but I'm sure that Simon borrowed a great deal more from the translations of Sumerian cuneiform tablets that have become increasing available in the past 50 or so years than he ever did from the Lovecraft's mythos. In fact, some of writings in the Necronomicon, such as the Maklu and the Magan text, are very similar to actual Sumerian and Babylonian manuscripts. In other words, Lovecraft's Necronomicon was a myth by his own admittance. However, Simon's Necronomicon is, at least in part, based on a religion that was very real and practiced for thousands of years. Personally, I am at least pleased to see a book create such a resurgence of interest in a system of believes that has been close to dead for such a long, long time. However, for those of you who are interested in taking the contents of this book to a more personal level, there are far more accurate sources to look to, although I'm sure Simon's work would be best in captivating your interests.

FORGET THE BOOK - THE REAL HOOTS ARE THE NAIVE REVIEWS....

Published by Thriftbooks.com User , 21 years ago
LOVED both Crowley and Lovecraft since childhood... how nice to read a creative grimoire that has some of the "spirit' of both! Does it work? Of course, if you make it so. "Alice in Wonderland" is a great grimoire if you approach it properly (ask any quantum physicist). Is this or any of the other "Necronomicons" a work of fiction? Who cares? Remember, Crowley often used fiction and poetry as prime source material and Wicca was reconstructed by an anthropologist or two in the 1950s (despite all the bogus "family tradition" people who suddenly appeared in the '60s). Even so, these arts really DO work - it's not the veracity of the reputed source that makes your Magick work, it's your MIND and your SPIRIT!........ On the lighter side, check out the many reviews below and the reviewers' constant trumpeting of their esoteric credentials... "I'm Frater Hoo-Ha and I've read my Lovecraft"...."I'm a Certified Crone, and these others don't know what they're talking about," etc., (methinks they do protest too much.) Remember, gentle Sabrina-and-Buffy-watchers, everybody else has already read the same mass-produced books (on magic or by Lovecraft) that YOU have read! Oh, well...
Copyright © 2020 Thriftbooks.com Terms of Use | Privacy Policy | Do Not Sell My Personal Information | Accessibility Statement
ThriftBooks® and the ThriftBooks® logo are registered trademarks of Thrift Books Global, LLC