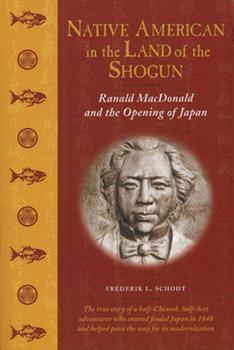 Native American in the Land of the Shogun: Ranald MacDonald and the Opening of Japan

How Japan, after 250 years of self--imposed isolation, began the process of modernization is in part the story of Ranald MacDonald. In 1848 this half-Scot, half-Chinook adventurer from the Pacific Northwest landed on an island off Hokkaido. Although promptly arrested and imprisoned for seven months in Nagasaki, the intelligent, well-educated MacDonald fascinated the Japanese and became one of their first teachers of English and Western ways. Based...

Published by Thriftbooks.com User , 15 years ago
Reviewed by Richard R. Blake for Reader Views (08/06) In 1848, at the age of twenty-four, MacDonald risked his life to follow a dream. MacDonald purposefully shipwrecked off the cost of feudal Japan. The country had rigid policies prohibiting contact with foreigners. How he envisioned and accomplished this adventure and the significance to us today is the premise of this book. Frederik L. Schodt has compiled and written this definitive biography of Ranald MacDonald in an effort to sort out "myth and speculation from fact." Schodt provides insight into the background of Japan's seclusion laws of the mid 19th century which includes the impact Ranald MacDonald made while being detained in Japan. Serving as an interpreter and teaching English to Japanese leaders played a part in the opening of Japanese-American relations, and intercultural communications. Ranald's mother a Chinook princess died shortly after his birth in February 1824. Ranald had Chinook Indian and Scottish origins. The author describes Ranald as being, "...a man of superior intelligence, possessing a phenomenal memory and an absolutely fearless spirit...he genuinely enjoyed people...displays a wonderful sense of humor...and had a rare ability to attract people from broad walks of life." Frederic L. Schodt has been meticulous in his background research. This has been a complex undertaking as earlier writings have often been incomplete and conflicting. Excerpts from correspondence between Archibald MacDonald and his peer's trace the early years and progress of Ranald's education. "Like many sons, Ranald MacDonald did not turn out the way his father anticipated. He was determined to follow his own dreams, in his own way." Word pictures and photos help the reader visualize the picturesque setting for this important narrative on the explorations and settlement of the Pacific Northwest, the whaling industry, and 19th Century Japan. Schodt introduces the importance of Hawaii's position as a trade link, and includes the vital insight into British, Dutch, and Russian attempts at breaking Japan's isolation policies. Drawing from Ranald's own published autobiography, newspaper articles, historical archives, and earlier biographical renderings - Schodt has constructed this masterful volume. Of particular interest to me was the account of MacDonald's experience in teaching English and learning Japanese during his time in Nagasaki. The fruit of this ability and opportunity later served Japan well in negotiating with English-speaking visitors including Commodore Perry in 1853. "The Perry expedition eventually resulted in commercial treaty between Japan and the United States, and became the catalyst for the collapse of the Shogunate ...and the eventual transformation of Japan from a feudal to a modern state." Schodt has written extensively on Japanese culture and U. S./Japan relations. This account incorporates Japanese history with biographical material on Ranald MacDonald. Sch

Published by Thriftbooks.com User , 15 years ago
Every now and then you pick up a book and think "Hmmm...that looks interesting." And then your world explodes. "Native American in the Land of the Shogun" is just such a book. At first glance, it appears to be a quirky story of a stranger in a strange land, something along the lines of Lafcadio Hearn or Donald Richie, foreigners who made their home in a country notoriously shy of foreigners. But Ranald MacDonald's story is much more interesting, full of adventure and daring do that would hardly be believable if found in a fiction novel. At that time Japan was a mysterious land, due to the sakoku laws which stated that foreigners could not enter Japan under penalty of death. Spurred by curiosity and a love of adventure, as well as his belief that his own Native American ancestors had evolved from shipwrecked Japanese sailors who drifted to the North American continent, Ranald MacDonald conceived a wild plan of purposely scuttling his boat off the shores of Hokkaido so he could appear as a shipwreck victim and hopefully be rescued instead of sentenced. Once there, he counted on his semi-Asiatic appearance and easy-going nature to protect him and hopefully convince the Japanese of his value as an English interpreter and teacher. Imprisoned in Nagasaki, he taught English for seven months, and his students, the only English speakers in all of Japan, were able to translate for Commodore Matthew Perry when he came to force open the closed doors of Japan. How differently things would have played out if Ranald MacDonald had been unsuccessful in his mad scheme! Amazing as it seems, Ranald MacDonald has faded from the eye of history, never receiving credit for his lynchpin role in history. In this book, Frederik L. Schodt seeks to pluck this incredible man from obscurity and let his story be told in full. "Native American in the Land of the Shogun" is a dense history book, setting the stage for MacDonald with a detailed study of the Hudson's Bay Company role in the Oregon Territories, or which MacDonald's father was Chief Factor. From there, he traces MacDonald's boyhood, education, disappointments and the discrimination he faced as an half-Chinook. The road to Japan is laid clear, going from New York, to Hawaii, to the Sea of Japan on a whaling ship, as well as his eventual return home and statement before Congress on the nature of Japan and the Japanese people. Richly detailed and captivating written, after reading "Native American in the Land of the Shogun" and hearing the story of Ranald MacDonald one wants to become an apostle, retelling his story to everyone willing to listen. This is definitely a book that I will be recommending from now on to anyone with an interest in Japan, or anyone who likes to read about fascinating characters that changed the world in a very small but important way, just because they wanted to.

Published by Thriftbooks.com User , 18 years ago
Schodt masterfully recreates a time when the west was truly wild, with a group of bizarre characters and a truly unbelieveable protagonist. It is all the more amazing, then, that this is a true story. As in his other books, Schodt has so many interesting asides that even his footnotes read like adventure novels -- I hope he returns one day to write the full story of the Japanese radio operator-girls who committed suicide when the Russians attacked. But back in the world of the 19th century, this story of the Amerindian-Scot who learned Japanese and was one of the first westerners to see the closed land of Japan is truly fascinating. The ideal gift for anyone who thinks they know all about the way the West was won, or indeed, the East.

A gripping history with larger-than-life characters

Published by Thriftbooks.com User , 18 years ago
Schodt has accomplished two things with one book. He has told the tale of a fascinating individual and his adventures in the Orient and elsewhere. And he has also brought to life a unique period in North American history that few of us learn about in school. Although the exploits of McDonald alone make for a great story, what interested me most was the vast historical and geographic tableau the author ambitiously depicts -- one that sprawls over decades and continents and is populated by such colorful characters as John McLoughlin, the virtual emperor of the Pacific Northwest, and James Dickson, the self-styled general of the "Indian Liberating Army," to name just two. The book's portrayal of the Metis culture of the U.S. and Canada in the early 19th century is a compelling story in itself. Coupled with McDonald's remarkable adventures in a Japan that was on the cusp of opening to the West, this makes for a gripping epic. Schodt has done a thorough and eloquent job of bringing it to life. "Native American in the Land of the Shogun" should entertain any history buff as well as satisfy the most discriminating scholar.

Published by Thriftbooks.com User , 18 years ago
Frederik L. Schodt is an interpreter and translator whose specialty is writing and understanding Japanese culture and Japanese-U.S. relations. In Native American In The Land Of The Shogun: Ranald MacDonald And The Opening Of Japan, Schodt ably presents the fascinating and true account of a half-Chinook, half-Scot adventurer who braved feudal Japan in 1848, when it was still closed to the outside world, and helped establish a legacy of knowledge that would pave the way to Japan's involvement in modern times. It was Ranald MacDonald's study of the Japanese language, and his teaching of English to interpreters of a nation, which helped Japan when the Japanese government had to negotiate with foreign visitors such as Commodore Perry and his fleet of "Black Ships" which arrived in 1853. An amazing, trailblazing account of one man's achievements and the intercultural communications he fostered, Native American In The Land Of The Shogun is an enthusiastically recommended addition to 19th Century Japanese History reference collections and reading lists.
Trustpilot
Copyright © 2022 Thriftbooks.com Terms of Use | Privacy Policy | Do Not Sell My Personal Information | Accessibility Statement
ThriftBooks® and the ThriftBooks® logo are registered trademarks of Thrift Books Global, LLC