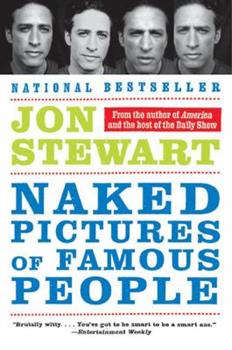 In these nineteen whip-smart essays, Jon Stewart takes on politics, religion, and celebrity with a seethingly irreverent wit, a brilliantsense of timming, and a palate for the obsurd -- and these one-of-a-kind forays into his hilarious world will expose you to all its wickedly naked truths. He's the MTV generation's master of modern humor, a star of film, TV, and the comedy stage. This sultan of savvy serves up a whip-smart, utterly original collection...

You can see how his brain works.

Published by Thriftbooks.com User , 15 years ago
Stewart said recently in an interview that his brain defaults to comedy and it couldn't be any more obvious than in these selections. I think we sometimes think all his stuff (except the interviews) is written for him but it is clear he has the intellectual depth and agility to produce material for an encyclopedia. Maybe that is the next project after his fake history textbook? An online fake encyclopedia?? Oh wait there's Wikipedia. Get this book, put it in your guestroom like I did. You overnight guests will try to steal it. Catch them and urge them to buy their own copy for their own guestroom.

Jon Stewart At His Finest

Published by Thriftbooks.com User , 16 years ago
A collection of 11 of the funniest essays i have ever read. While some younger readers(At least those with poor knowledge of history) might not get some of the content there are still just purely funny essays. A Short must read.

Published by Thriftbooks.com User , 17 years ago
Jon Stewart is not only hilarious, but he is also quite intelligent and this shines in Naked Pictures. This is one of those books that can be read in a couple afternoons or in the 5 minutes between classes. I loved the way Stewart explored writing in this book, changing his tone and writing style in every essay masterfully. From the Hitler interview to Martha Stewart's Vagina this book covered such a variety of topics all begging to be satired. Filled with allusians to Mary Jo Kopechne and horror movies. This book is the perfect way to cleanse one's pallet from all of the trite and contrived novels that flood the market. This book is such a breath of fresh air, a must read.

the reason why jon stewart is so influential and popular

Published by Thriftbooks.com User , 17 years ago
i gotta say, this book left me in stitches, even when i found some of the stories to be mildly offensive. but then again, what makes jon stewart so great is that nothing is off limits, evrything from judaism to martha stewart to hitler. "avram the waiter" was possibly the smartest and funniest sections in the book..but then again, there were so many great parts it was hard to pick one. jon stewart can show a comedian range of hilarity and downright silliness (the part about the Kennedys) to pure satirical gold (avram the waiter and van gogh on AOL).

Gerald Ford would be proud.

Published by Thriftbooks.com User , 19 years ago
Being in college, I spend a good portion of my day watching TV. One highlight has always been "The Daily Show with Jon Stewart." As a result, I picked up this book. This might actually be the first book that I have wanted to read since the Horton series. And this is well worth the wait.Stewart lets loose in this book, writing about 20 essays that start (mostly) in reality and end up somewhere around Oz. Most essays involve the twisted private lives of famous people, hence the title. These include Hitler, Bill Gates, the Hansons, The Kennedys, Jesus, President Ford and Martha Stewart, no relation. Some comment on current forms of media, such as AOL chat rooms and over-hyped award shows.Overall, this book is packed quirky little things that made me laugh out loud. It is very clever, very well written and very funny. For those who know Stewart through "The Daily Show," I think you'll know what to expect. For anyone who likes well-written satire that doesn't involve pigs named Napoleon, here's your book. Just a note: this probably isn't for the faint of heart or youngin's, especially Martha Stewart's essay. But it's still darn funny.Thank you Jon Stewart. Quite a moment of Zen.
Trustpilot
Copyright © 2022 Thriftbooks.com Terms of Use | Privacy Policy | Do Not Sell or Share My Personal Information | Accessibility Statement
ThriftBooks® and the ThriftBooks® logo are registered trademarks of Thrift Books Global, LLC