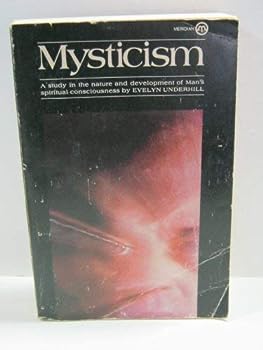 A study in the nature and development of man's spiritual consciousness. This book falls naturally into two parts; each of which is really complete in itself, though they are in a sense complementary to one another. The first is intended to provide an introduction to the general subject of mysticism; while the second part contains a somewhat detailed study of the nature and development of man's spiritual or mystical consciousness.

A Different Way of Knowing

Published by Thriftbooks.com User , 15 years ago
The author states at one point that only a mystic can write about mysticism, or rather about the true mystic experience. Conventional language, mere words, are poor tools for expressing transcendent reality. In spite of this I found myself exclaiming again and again during my reading that I knew exactly what was being described. The core here is that only Being can know Being, we behold that which we are, and we are that which we behold. There is a spark in man's soul which is Real and by its cultivation that we may know Reality. You can only behold that which you are. Only the Real can know Reality. If this resonates to you, if it sounds strangely familiar, then perhaps this work is for you. The mystic is drawn to the path by the force of love- the overriding desire for union with the Absolute. It is by this power that he or she is drawn to transcendent reality. This love leads to the state of contemplation which is the subtle state of consciousness that allows access to another plane. It is a form of consciousness recognized by Plato and Plotinus as well as Augustine and Aquinas. It is that form of consciousness beyond the emotional, intellectual, and volitional striving of ordinary men- a different way of knowing. The second half of the book is structured according to the pattern of awakening, purification, illumination, ecstacy and rapture, the dark night of the soul, and the unitive life. In no sense is it a "how-to" guide, but it is a most valuable validation for those who have travelled any way at all on the path. It has also been traveled by others. I find it significant that the author ends her appendix of biographical sketches with William Blake's death in 1827. There have of course been genuine, accomplished mystics since then, but the materialist and rationalistic world is more hostile to the testimony of the true mystic than the "dark ages" ever were. And yet Mystic Union is no less a reality- and no less obtainable by the boon of grace. After all, it is to know God that is our ultimate and highest purpose- all else is secondary if not ultimately trivial. This particular edition has a foreword by Ira Progoff the noted depth psychologist, student of Jung, and father of theraputic journal keeping.

Published by Thriftbooks.com User , 15 years ago
What the world, which truly knows nothing, calls `mysticism' is the science of ultimates . . . the science of self-evident Reality, which cannot be `reasoned about', because it is the object of pure reason or perception. - Coventry Patmore, "The Rod, the Root, and the Flower". _Mysticism: A Study in the Nature and Development of Spiritual Consciousness_ is a republication by Dover Publications of the twelfth edition of a work first published in 1911 by mystical writer Evelyn Underhill which attempts to shed light on the nature of mysticism in terms of philosophy, psychology, and mysticism itself through beautiful prose. Evelyn Underhill (1875-1941) was an Anglo-Catholic writer on mysticism, influenced heavily by Neoplatonism and her mentor the Roman Catholic mystic Baron von Hugel, who presented the teachings and writings of medieval Catholic mystics to a largely Protestant audience. This book discusses mysticism from a Christian perspective (emphasizing Catholicism in particular), though mention is made of some Moslem, Jewish (the Kabalah), and Oriental mystics. In this book, mention is made of such mystics as Philo, Saint Paul, Clement of Alexandria, Origen, Plotinus, Saint Augustine, Dionysius the Areopagite, John Cassian, Saint Gregory the Great, Saint Bernard of Clairvaux, Saint Hildegard of Bingen, Joachim of Flora, Richard of Saint Victor, Mechtild of Magdeburg, Saint Francis of Assisi, Jacopone da Todi, Saint Bonaventure, Saint Thomas Aquinas, Jalalu `d Din (Islam), Ramon Lull, Dante, Meister Eckhart, John Tauler, Henry Suso (part of the "Friends of God" movement), John Ruysbroeck, Thomas a Kempis, Margery Kempe, Richard Rolle, Julian of Norwich, Saints Catherine of Sienna and Genoa, Saint Ignatius Loyola (the Jesuits), Saint Teresa, Saint John of the Cross, Jacob Boehme (the "inspired shoemaker"), George Fox (Quaker), Thomas and Henry Vaughan, Saint Francois de Sales, Brother Lawrence, Madame Guyon (quietist), William Law (Quaker), Eckharthausen, Saint-Martin, and Blake (poet). Furthermore, the following anonymous mystical works are mentioned "Theologia Germanica", "The Mirror of Simple Souls", and "The Cloud of Unknowing". Philosophically, Underhill emphasizes the psychological theories of William James (cf. _The Varieties of Religious Experience_) and R. M. Bucke (cf. _Cosmic Consciousness_), the vitalist theories of Henri Bergson, the theology of Karl Barth and Rudolph Otto, and in particular the writings of her mentor Baron von Hugel on mysticism. This book is divided into three main sections: "The Mystic Fact", "The Mystic Way", and "A Historical Sketch of European Mysticism from the Beginning of the Christian Era to the Death of Blake". The first section attempts to define mysticism in terms of man's quest for Truth and the Absolute. It outlines the philosophical schools of Naturalism (shown to be problematic), Idealism (shown to be more appropriate to mysticism but limited), Philosophical Scepticism (shown to be s

Published by Thriftbooks.com User , 20 years ago
I read Underhill's magisterial "Mysticism" the summer after I graduated from high school, and I've been a student/devotee of the western contemplative tradition ever since. Underhill's accessible if British-formal prose provides a wonderful, elegant stage on which the majesty and depth of the interior life can be celebrated. The book neatly divides into two halves: the first examines mysticism from theological, psychological, and philosophical perspectives; the second takes the reader on a tour of the process of mystical growth over the lifespan, looking at such key life passages and transitions as conversion, self-purification, illumination, the "dark night," and union. What emerges is a developmental map for adult spiritual growth, which is a tremendous corrective to many of the silly notions floating around in our society, such as the idea that one single "born again" experience is all that is necessary to achieve total spiritual attainment. What I especially love about Underhill is her evident enthusiasm and passion for her subject matter. Without ever saying it in so many words, she reveals in her writing that mysticism is more than a dry subject for disinterested study; it is a living, breathing tradition, that demands engagement and participation from those who would explore it. Ultimately, mysticism is not found in a book, but in the lived process of relating to the Divine. It's ironic that this message needs to be passed down in books, and yet, Underhill's wonderful study of the subject does just that. This was written in 1911, and shows some marks of age; for example, the chapter on "Vitalism" refers to a philosophical fad of her day that seems almost totally irrelevant a century later. Even so, I have a house full of books on this topic, ranging from the scholarly (Bernard McGinn) to the popular (Thomas Merton) to the just plain silly (Keith Harary's and Pamela Weintraub's "Mystical Experiences in 30 Days"), and I have yet to find a single volume that provides a better, more useful, and more potentially transformative introduction to the contemplative life than this book.

Published by Thriftbooks.com User , 21 years ago
Mysticism: The Nature and Development of Spiritual Consciousness by Evelyn Underhill, is a must read for any serious student of Christian mysticism. This is also a wonderful work for understanding the spiritual experiences of the great mystic saints. This classic text explores the common features that tie together the religious lives of St. Teresa of Avila, St. John of the Cross, St. Catherine of Siena, St. Catherine of Genoa, St. Francis of Sales, St. Francis of Assisi, St. Ignatius of Loyola, St. John of Ruysbroeck, and others. She explores the core nature of the mystical experience both theologically and psychologically. Underhill is brilliant in her discourse on the mystic way. Her theology is impeccable. I highly recommend this book.

This book is the mother-lode on mysticism.

Published by Thriftbooks.com User , 23 years ago
For the best study of mysticsm, this is the true text book. Word of warning - I picked it up as my first book on the subject and felt I was reading a foreign language. After reading three books about individual mystics, I again picked up Mysticism and found that the book was incredible and probably the best reference book ever written, or to be written, on this topic. I am sure I will refer to it again and again for further detail on certain ways of the mystics. It is apparent that this was Ms. Underhill's mission in life - to interpret and explain mysticism for all of us.
Copyright © 2020 Thriftbooks.com Terms of Use | Privacy Policy | Do Not Sell My Personal Information | Accessibility Statement
ThriftBooks® and the ThriftBooks® logo are registered trademarks of Thrift Books Global, LLC