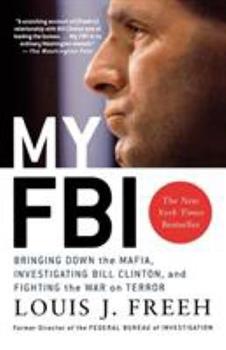 My FBI: Bringing Down the Mafia, Investigating Bill Clinton, and Fighting the War on Terror

A spectacular New York Times and Washington Post bestseller, My FBI is the definitive account of American law enforcement during the Clinton years and in the run-up to September 11. Louis Freeh is clear eyed, frank, the ultimate realist, and he offers resolute vision for the struggles ahead. Bill Clinton called Freeh a "law enforcement legend" when he nominated him as the Federal Bureau of Investigation Director. The good feelings would not last...

Published by Thriftbooks.com User , 17 years ago
There was a time when the FBI could do no wrong. J. Edgar Hoover carefully crafted an image of excellence that, true or not, made the agency greatly respected. Later came Ruby Ridge and Waco. In the darkness that followed Bill Clinton appointed Louis Freeh to be the head of the organization. During the years that followed, it almos tseemed that Bill Clinton himself was the target of most of the high profile investigations conducted by the Bureau. As we all remember, it was one scandal after another. This was, however, also a time of other developments - the bombing of the Khobar Towers, the Unibomber, Robert Hanssen the Soviet spy working at the FBI, the build up of the al Queda attack at the World Trade Center, and more. Mr. Freeh's relationahip with Bill Clinton was strained (to say the least) and in this book he lays out a lot of the reasons why. Obviously his view is his own, Clinton's view is a bit different. Clinton supporters will hate it, others will love it. In summary, this is one of those books that come out after the person leaves office and begins to explain to us what really happened. This is one story, other writers will produce others, and in ten years or so the historians will put it all together. As for this book, it is well written and tells what was going on in a very important agency during a critical time in its history. It is well worth reading.

Published by Thriftbooks.com User , 17 years ago
No matter what the year, which director of the FBI sits at the head of the organization or how many major catastrophes are in focus at any given time, the FBI will always take the heat for the so called negative occurrences perceived by the public, media or other security related departments. If Louis Freeh, William Sessions or Pope Bendedict was the main man in the FBI office, it wouldn't make an ounce of difference. The critics would always find fault with decision making inside the bureau. From where Louis Freeh sat during his reign, he believed, and still does, that he did the best job he possibly could. Anyone given such a position with the nation's security in his hands would not go out of his way to harm or hinder the Justice of the day. MY FBI is written with thorough thought via the eyes and mind of Louis Freeh. There is nothing new regarding his testimony of his predecessors or his relationship with President Clinton. Freeh acknowledges making mistakes, he cared deeply for his country. Louis Freeh has written an honest, outstanding account of his sojourn in one of the top positions in this wonderful United States of America. For all the critics out there, have a good, hard, long look in your own backyard. -Yvonne Bornstein, Author, Eleven Days of Hell - My True Story of Kidnapping, Terror, Torture and Historic FBI and KGB Rescue

19 Skeletons Speak From the Grave

Published by Thriftbooks.com User , 17 years ago
Louis Freeh is a man who doggedly pursues the "truth" - not just as a matter of course, but even more intensely when the facts of a case are obscured by layers of deceit. As the second longest running Director of the FBI (from 1993 -2001), Judge Freeh is a man whose job it is to know the North Star of our nation's moral compass. He is a man whose expertise is the moral, social and poetic justice that comprise the comprehensive truth. He is a man whose obligation - sacred duty - is to defend and safeguard the deepest, darkest secrets of our nation. He is a clever man who creates a compelling contract with the astute reader. By telling his story in a non-linear fashion featuring a moral dilemma, he requires that his reader remain hyper-alert throughout 336 pages, taking into account that each word and anecdote is likely to be scrutinized by our enemies and adversaries. Mr. Freeh skillfully opens the book with the bombing of the Khobar Towers on June 25, 1996 - an event wherein 19 Americans are killed and over 300 injured -- a defining event in recent American history, one that forces Mr. Freeh to confront the most significant moral dilemma of his life, one that tests his beliefs, defines his career, and shapes his life. America is under attack from Islamist terrorists, in various forms, from within and without. Acutely aware of his destiny to confront these aberrations at their source, Mr. Freeh promises the survivors of the 19 dead that he will bring the perpetrators of Khobar Towers to justice - but soon discovers that the President of the United States has no intention of investigating the (Iranian) perpetrators, let alone confronting the web (Osama Bin Laden, Al Qaeda, Hamas, Hezbollah, Arafat) of terrorists and adversarial regimes (Iran, Iraq, North Korea, Pakistan, China) that support(ed) the continual asymmetrical assaults that had plagued America since Ramzi Yousef's attack on the World Trade Center in 1993. Mr. Clinton has neither the political will, nor the moral conviction, to bring these barbaric terrorists and companion regimes to justice, especially during an election year. What we discover, along with Mr. Freeh, is that it's not just the election year that causes President Clinton's moral compass to spin haphazardly. President Clinton is a man whose moral compass is either non-existent or wildly out of control. He is a man guided by external images and external prizes. He is a man who seeks enrichment and fulfillment by false adulation, loose women, opportunistic schemes, excessive appetites, false utopias, feel-good cigars, and foreign money. He is a man who foregoes a true development as a human being, in favor of a nihilistic journey into the netherworld of fraud that leads to the blackened abyss of compound fraud. Rendered impotent by an ambitious wife who alleges that external forces conspire to destroy them both, their final act curtain is to pardon the legendary swiss bankophile, Marc Rich. Mr. Clinton is a

Published by Thriftbooks.com User , 17 years ago
Louis J. Freeh, the former FBI director(1993-2001), has put together a string of life's accomplishments, struggles, obstacles, and frustrations presented in the clarity of the moment, as he sees it. The chronicle is his own biography, and nearly half of the book encompasses educational background, and experiences with New York city crimes while working in the US Attorney's office. But, make no mistake! The theme of the book craftily pivots on issues that involve his difficult relationship with Bill Clinton, who had chosen him, as a "law enforcement legend", and later regretful as his "worst" appointment. Freeh graduated from the New York University Law Scool in 1975, worked as an FBI agent from 1975-1981, and then in the US Attorney's office in New York city until 1991. He was appointed as the US District Court from 1991-1993. The book is interesting, informative, captivating, and easy to read. There is a hint of venom that Mr. Freeh carefully guards, as he delves into his chapter critical of his boss, his President, our President -- intelligent and politically skillful, but a crack in his thought process, which let the truth slip by...just slip by! The following are the highlights that troubled Mr. Freeh: >The Kobar Towers investigation in Saudi Arabia, which he believes Mr. Clinton ignored, and the interference in the probing of the matter...allowing the terrorists to escape. <br />>He is surprised by the underestimation of casualties by Mr. Clinton in his book "My Life"...by as many as 70...and even the misrepresentation or the inference that these terrorists were caught. <br />>Modernization of FBI computer system, requesting $90 million but only receiving two million. <br />>Pardoning of Marc Rich whose former wife donated one million to the Clintons. <br />>Scandels of the nineties, particularly the Lewensky scandle that plagued the presidency. <br />>Views on Robert Hanssen -- the double agent. <br /> <br />Freeh underscores the difficulties he had in dealing with his job, because of Mr. Clinton's never-ending scandels, rumors, and personal conflicts, which triggered FBI investigations. His views are forthright, and seemingly based on facts and candid recollections. Understandably, perhaps, this book is in contrast to Mr. Clinton's "My Life", and ultimately it will be up to the reader to decide which one prevails. <br /> <br />Character does matter! The book is a credible source of information, and does indulge in the strengths of FBI and future imptovements. It is a worthy read and will no doubt cause some political repercussions and debates on the airways. <br /> <br /> <br /> <br /> <br /> <br /> <br />
Trustpilot
Copyright © 2022 Thriftbooks.com Terms of Use | Privacy Policy | Do Not Sell or Share My Personal Information | Accessibility Statement
ThriftBooks® and the ThriftBooks® logo are registered trademarks of Thrift Books Global, LLC