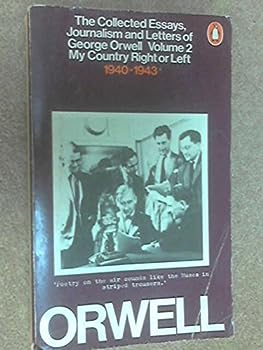 (Book #2 in the The Collected Essays, Journalism & Letters Series)

This description may be from another edition of this product. George Orwell is a major figure in twentieth-century literature. The author of Down and Out in Paris and London, Nineteen Eighty-four, and Animal Farm, he published ten books and two collections of...

Published by Thriftbooks.com User , 12 years ago
My earlier review on the first volume of this series may be of interest to the reader and help him understand the content of this volume. Like the first volume, this volume is composed of letters, essays, book reviews and journals dating (generally) to the early war period when the fate of the world seemed bleakest. At the risk of seeming lazy, I will highlight what seems most interesting to me and look at selections I believe are unique to this collection. I can never be sure, however. The Letter to The Editor of Time and Tide...conveys the panic caused by the unfounded belief in an impending invasion of England by Nazi Germany. Orwell displayed an amazing detail of knowlege about such things as the use of dynamite against entrenched street fighters taken from his days in Spain. Orwell later tried to persuade the Home Guard (I believe) or LDV to train volunteers in insurgent warfare, but later reflected that the ruling class would have other issues with that idea. Phamplet Literature...The essay on phamplets reflects Orwell's giant collection of Depression era phamplets housed in the London Museum. This is essay is a literary time capsule since phamplets are often included in real time capsules. Phamplets give future generations a glipse into the nut culture of a particular period of history. The interesting question posed by this subject is whether the internet itself is a kind of populist electronic phamplet...blogspots drowning out legitimate literature and journalism. How would Orwell have reacted to this new electronic, immmense phamplet? Literature and Totalitarianism...Do you remember in "1984" how the State altered its dogma to the changing political circumstances it created? East Asia then Oceania then Eurasia...endless shifting alliances and slogans. Hitler quickly changed Communism to a useful socialist brother when the pact was signed with Molotov. Hitler's Communist victims in Dachau, the KPD, were soon forgotten by the soviets as well. Truth is elastic for totalitarians. New Words...an essay I haven't seen elsewhere, deals also with language and mind and probably had an influence on newspeak in "1984." It is interesting to note that Gordon Comstock compromises his idealistic poverty to become a middle class advertising copy writer in "Keep The Aspidistra Flying" after sneering at idotic ads for Bovril. Comstock's new life consists of composing idiotic ad slogans that seem almost totalitarian. Mein Kampf...Orwell reviewed the writings of fanatics as well. The edition Orwell rviewed cast Hitler in a slightly favorable light in 1939 casting Hitler as an errant Conservative. The edition was quickly reissued with the royalties going to the Red Cross. Even Orwell professed a grudging acceptance of Hitler as convincing theatric figure capable of producing pathos and destiny in his presentation. War-time diary...These diaries lasted from May 1940 to November 1942. They convey the pop culture of wartime England and the odd detac

Published by Thriftbooks.com User , 14 years ago
This book is an anthology of Orwell's essays, literary criticism, letters to friends,and political criticism. Those who read this book can read some interesting letters that Orwell wrote to the editors of THE PARTISAN REVIEW on the fortunes of W.W. II involving the British. The book concludes with Orwell's diary of the war. While George Orwell (1903-1950)was a self admitted "leftist," he was not an ideologue. Orwell showed that he was a well read individual and knew very well that political labels conceal the desire for political power regardless of political titles and party affilations. Orwell was a master of literary criticism. Two examples are his review and comments on Hitler's MEIN KAMPF and Tolstoy's denounciation of Shakespear. Orwell commented that an English review of Mein Kampf favaored the German dictator. Orwell correctly predicted such praise would soon evaporate which it did. Orwell informed readers that praise for Hitler was not unusal. One must note that Churchill complimented Hitler in Churchill's book titled GREAT CONTEMPORARIES. Churchill also complimented Hitler in a speech to Parliament in November, 1938. Here Orwell shows not only his ability as a literary critic, but he informs younger readers that the political disapproval word,fascism, had a different connotation. Many Europeans including the British middle and upper classes had serious concerns of Big Communism with its record of mass murder and concentration camp brutality. Orwell showed himself again as a literary critic when Orwell critisized Tolstoy for the latter's condemnation of William Shakespear. Orwell correctly refuted Tolstoy on a couple of issues. First, Tolstoy read Shakespear in translation which may have tainted his understanding of Shakespear. Also Tolstoy tried to condemn Shakespear in lieu of Tolstoy's social philosophy. Orwell stated such criticism was useless because such criticism would have been incomprehensible to Shakespear and his English contemporaries in the 16th and early 17th centuries. Orwell also chided Tolstoy for his assumed superiority. Tolstoy could not understand why Shakespear literary work was so appealing and wrote that everyone should know that Shakespear was some sort of scoundral. Yet, Orwell wryly comments that Shakespear's literay work was available throughout the world while Orwell could not find Tolstoy's essay until he found it in a museum. The best part of this Orwell anthology are his political essays. Orwell noted that there was suppose to be a bitter political divide betwen Fascism and Big Communism. When the German-Soviet Non-Aggression Pact in 1939 unhinged this concept and angered Communists and their fellow travellers. When asked about this unexpected turn of diplomatic events, Molotov (I believe it was Molotov) who said that the difference between Socialism (Bib Communism) and Fascism was a matter of taste. Approximately two years later when the Germans invaded the Soviet Union on June 22, 1941, this view sure

Some of the best essays in the English language

Published by Thriftbooks.com User , 19 years ago
...Country Right or Left is part of a four volume set of essays commissioned by Orwell's wife Sonia. Whatever the criticisms that have been made of her stewardship of Orwell's legacy, these four volumes contain much of the best of Orwell's essays, letters and diary excerpts. This volume covers the early war years and much of the writing is shaded by that war. This is Orwell at his finest, on one hand a confirmed socialist dedicated to fighting the right whether the Tory party or fascism; one the other hand an anti-Stalinist and critic of the left and always an anti-totalitarian.Contained within "My Country Right or Left" is some of Orwell's best writing. In "Pacifism and the War", a notorious piece at the time, he accuses pacifists of aiding the fascist cause. "The Art of Donald McGill" is an essay about, of all things, postcards that are popular among the middle and lower classes. The postcards themselves, Orwell argues, say much about England's political and social attitudes. It's actually a perceptive piece of pop art and social commentary. Among my favorites is the essay concerning Mark Twain (Mark Twain- Licensed Jester). Orwell, a great admirer of Twain's, is critical of him for not being forceful enough in his social criticism. He accusation is that Twain pulls his punches far too often. It's a great piece of criticism and is Orwell at his finest.What holds a large amount of this Volume together are the letters to the Partisan Review, a New York publication that contracted with Orwell to write commentary on England during this early war period. The issues vary from English politics, reflections on the clothing worn by the masses, attitudes towards democracy and so on. All well written, never dull and very often wrong in their predictions. There is much more here including excerpts from his diary, letters to other major figures of the day and reflections on the Spanish Civil War. This is some of the greatest essay writing in the English language. Even sixty years later the essay's read clearly and give insight to Orwell's thinking.

Published by Thriftbooks.com User , 19 years ago
This is a great collection of essays and other writers by one of the foremost socialist critics of totalitarianism and domination. It is also a great book for admires of writers such as Noam Chomsky, Howard Zinn and Edward said, as all share the same overarching purpose: to be a tireless critic of power and domination wherever it may be found. It is ironic to the extreme that so many conservative revisionists attempt to claim Orwell as their own, which is due to the tragically myopic misreading of his writings, especailly 1984 and Animal Farm. Both books are condemnations of totalitarianism, and in the case of Animal farm, the final page attests to Orwell's repugnance of capitalism. Let it not be forgotten that Orwell fought in the Spanish Civil War in the aid of the socialist-anarchists. This is truly a great collection, which should be required reading for those who may not be familar with Orwell's non-fiction work.

Orwell In His Prime

Published by Thriftbooks.com User , 20 years ago
Though remembered today primarily for ANIMAL FARM and 1984, George Orwell was also one of the most brilliant essayists of the 20th Century. This volume (the second of four recently re-released in paperback) shows the range and depth of his journalistic writing. Orwell was a Socialist and avowed leftist, but he never felt compelled to toe the party line. What makes his journalistic writings so lively and thought-provoking is that he constantly challenges the reader to look at entrenched ideas from a fresh perspective. This volume contains his justly famous essay on England, "The Lion and the Unicorn", and pieces on such wide-ranging subjects as Hitler's "Mein Kampf", Tolstoy and Shakespeare, and a spirited appreciation of Rudyard Kipling (politically and artistically not the sort of writer one would expect Orwell to defend). Interspersed with the essays is a selection of Orwell's letters from this period, as well as his fascinating War-time Diary. You may not always agree with Orwell's opinions, but you will never be bored. Orwell was a master stylist, but what really strikes the reader is how startlingly relevant the essays are, sixty years after they were written. An absolutely first-rate collection by a major writer who is long-overdue for reassessment.
Copyright © 2020 Thriftbooks.com Terms of Use | Privacy Policy | Do Not Sell My Personal Information | Accessibility Statement
ThriftBooks® and the ThriftBooks® logo are registered trademarks of Thrift Books Global, LLC