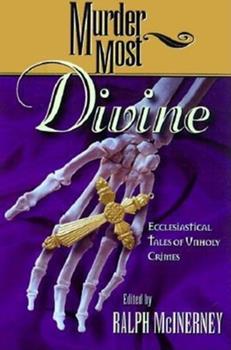 (Part of the Murder Most Series)

Murder Most Divine is an anthology of short stories in which the murders are solved by clergy using the cleverest of methods.

Published by Thriftbooks.com User , 14 years ago
This is a mixed bag of murder mysteries all with the same theme...religion, the Church, and murder. As the headline states, some of the stories are truly fascinating and engaging...others?...well, let's just say that not all murder mysteries are created equally. Nonetheless, this is a decent read.

Published by Thriftbooks.com User , 14 years ago
I got a copy of this anthology originally because I knew there was an uncollected Charlotte Armstrong story in it, one of her strangest, "The Second Commandment" from 1967. This story is so unlike Armstrong's regular fiction that I have sometimes wondered if she was attempting a new tack and trying to carry off an imitation of another Southern California suspense writer, Margaret Millar, for the story is much more like Millar's HOW LIKE AN ANGEL than any of the Armstrong tales I'm familiar with. Hugh Macroy, a pastor, is on his honeymoon when he pulls his car over on a foggy section of Highway One overlooking the Pacific Ocean, so that his new bride, an older woman of 55, can "answer a call of nature," as the police chief puts it. When she tumbles over (or disappears at any rate), the police look harder and harder at Macroy's possible motives for doing her in, despite the opposition of Macroy's superiors in the church. The "water sports" plot of the story, to put it mildly, is unlike anything Armstrong had previously attempted, and she doesn't want to let it go, it comes back at the very end of the story in an umcomfortably graphic way. But there is more to MURDER MOST DIVINE than this rarity. One of the best Father Brown stories, "The Wrong Shape," is here, as well as the "Sister Ursula" story "The Stripper," by Anthony Boucher. I didn't really care for the "Sweating Statue," by Edward Hoch. I keep hearing people talk about Hoch like he's this great genius but please, if the "Sweating Statue" caper is typical of his impossible crime tales, he's not all that he's cracked up to be. I understand he has published at least one story every month in EQMM for the past fifty-five years. Maybe sometimes he could use a vacation. I don't know, perhaps "The Sweating Statue" makes more sense in the whole corpus of Hoch's writing? I was glad to see the reclusive Alice Scanlan Reach make a welcome appearance with "In the Confessional," not the best thing she ever wrote but hey, this is the one Orson Welles picked up and introduced in his 1970s "Great Mysteries" so that Milo O'Shea could play Father Crumlish--an inspired casting choice. Some of the stories in MMB are below average, but nowadays, I'm just glad to see that somebody, in whatever fashion, is still reprinting the work of the tragically underappreciated Charlotte Armstrong, one of the USA's very best novelists whose shorter fictions are also worth tracking down.

Stories that prey on your mind!

Published by Thriftbooks.com User , 17 years ago
No , Dan Brown is not among the authors of this "saintly collection" of short stories. There is no DaVinci revelation! However, what the editor has done in this anthology is to amass some spirited canons of literary merit, metaphorically speaking! In "Murder Most Divine," we find the ecclesiastical range being quite thoroughly explored. These 18 stories present some good priests, some not so good priests, sleepwalking nuns, and other saintly (and sometimes not so saintly) souls, all mixed up in one commonality: murder. Robert Bernard's "Holy Living and Holy Dying" is my favorite one in this collection. Bernard's rapier wit and chilling, clinical approach to the story makes this selection one to bow down for! Anthony Greeley keeps us in the 20th century with "The Bishop and the Hit Man" as only Father Greeley can do. P.C. Doherty goes back a few centuries (as he's known for doing in all those great novels of his) with "The Monk's Tale." The others are all worthy reading, too. A fun fire-side sit-down read! (Billyjhobbs@tyler.net)
Trustpilot
Copyright © 2022 Thriftbooks.com Terms of Use | Privacy Policy | Do Not Sell My Personal Information | Accessibility Statement
ThriftBooks® and the ThriftBooks® logo are registered trademarks of Thrift Books Global, LLC