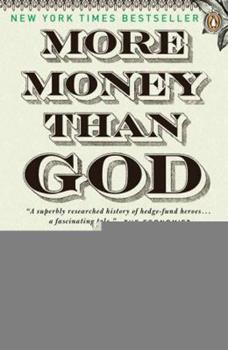 More Money Than God: Hedge Funds and the Making of a New Elite

"Splendid...the definitive history of the hedge fund, a compelling narrative full of larger-than-life characters and dramatic tales." -- The Washington Post Wealthy, powerful, and potentially dangerous, hedge fund moguls have become the It Boys of twenty-first- century capitalism. Beating the market was long thought to be impossible, but hedge funds cracked its mysteries and made fortunes in the process. Drawing on his unprecedented access to the...

Published by Thriftbooks.com User , 11 years ago
If you have read "Too big to fail", "House of Cards", "Big Short", "Lords of Finance", "Fool's Gold", etc. you will like this book better. More wisdom based on incredible research and interviews. I was initially resistant to Mallaby's recommendations about financial reform, but he sold me based on reasoning well supported by evidence. The clearest, most readable and reasoned discussions of the efficient-market theory and Soros' reflexivity. If you don't know those terms, read this book anyway. He will at the end and you'll be glad whether you interest is investing or just voting. This is scholarship dressed up as popular non-fiction. On a par with Tom Wolfe and Malcolm Gladwell for brining non-fiction to a wide audience.

Surprisingly Enjoyable History of the Evolving Role of Hedge Funds.

Published by Thriftbooks.com User , 11 years ago
The splashy title "More Money Than God" doesn't do Sebastian Mallaby's hedge fund chronicle justice. It sounds like a gossipy tour of New Gilded Age wealth. Hedge fund managers are among the nouveau mega-riche, but that's not what Mallaby's book is about. This is a history of the major developments in hedge funds from Alfred Winslow Jones' pioneering "hedged fund" in 1949 through John Paulson's 2007 coup in shorting sub-prime mortgage securities and beyond. Mallaby defends hedge funds against the rash of criticism that their successes and failures in the past few years has unleashed by chronicling the changing role and increasing power of hedge funds over the past 60 years. He presents both views of hedge funds, with examples: They make markets more efficient and stable and led the flow of capital to the developing world. Their aggression and high leverage can be a destabilizing force, and their history is not free of underhanded tactics. Mallaby lets the larger-than-life personalities of hedge fund magnates lead us through his history. He chooses hedge fund managers whose innovations influenced the industry: Alfred Winslow Jones' hedged fund that made 5000% in 20 years of the post-war era, Michael Steinhardt's success in the 1960s and 1970s with contrarian ideas, monetary analysis, and block trading, the econometrics of Commodities Corporation, Bruce Kovner's "carry trade", George Soros and Stan Druckenmiller's currency speculation in the 1990s, the superior stock-picking of Julian Hart Robertson's Tiger Fund, Paul Tudor Jones II's market moving, Long-Term Capital Management's lesson in leveraged finance, James Simon's Medallion Fund and David Shaw's fund as different styles of quantitative trading, Ken Griffin's multi-strategy Citidel, Amaranth's 2006 blow-up, August 2007's "quant quake", and more. Mallaby admires hedge funds, because they find more success than investment banks with less systemic risk and no taxpayer-funded bailouts, but he doesn't avoid legitimate qualms about their role. Mallaby concludes by making a case against regulating funds with fewer than $120 billion in assets. He points out the hedge funds blow up all the time (5,000 failed between 2000 and 2009) but still fare better than investment banks or the S & P, even after correcting for survivorship bias. Mallaby's approach to the good and bad of hedge funds is thoughtful and engaging. I was surprised how much I enjoyed this book. It's a gold mine of information for those who are not sure what a hedge fund is or what they do, and it can serve as a (patchy) introduction to global finance. For those who read the Financial Times every day, "More Money Than God" is a compelling history of the industry and a fun read, even if some of it will be old news.

Lack of Fear Itself

Published by Thriftbooks.com User , 11 years ago
Inverting Franklin Roosevelt "...investors should fear the lack of fear itself". This is just one insight Sebastian Mallaby gives us in `More Money Than God'. In fact, he gives a nuts and bolts feel for Hedge Funds, their history and the people - the masters of the universe - who operate them. It is a history of leverage, short selling and size characterized by major success and catastrophic failure. Strangely, it also gives the small investor an insight into the share market. Is the market efficient? Can the market be beaten? If the market is not `efficient', hedge funds (and the small investor) can be successful. But sadly for an ongoing hedge fund, success removes the imperfections that it was profitably exploiting. "Sooner or later, every great investor's edge is destined to unravel" and often "quant brainiacs follow their computers to a well-deserved doom" because "the rocket scientists had blown up their rockets". Success means a flood of money into the hedge fund. But "an analyst might identify a promising small company and figure that its value could double over three years, but if there were only $20 million worth of shares available to buy, it was hardly worth bothering with." Not so for the small investor, but then again the hedge funds seem to be able to short sell flexibly at will - a facility that should democratically be available to the small investor. Starting in the 1990's, hedge funds became large enough to move markets of all kinds. They could even overpower governments. This allowed the Tiger Fund in 1998 to approach "Russian friends...to buy the entire stock of nongold precious metals held by the central bank and finance ministry...take the palladium, the rhodium, and the silver. All of it." leaving the logistics problem of getting it into a Swiss bank with Tiger's name on it. For the small investor there is sound advice: - it is often dangerous to trade on statistical evidence unless it can be intuitively explained". "Visceral" is the word meaning deep inward feelings rather than just an intellectual focus. - "The whole point of leverage, the very definition of the term, is that investors feel ripples of the economy in a magnified way." - We all rationalize success. One position by the Chanos Fund only worked out because the April 1989 Tiananmen Square demonstration broke out. This earned the comment "The way Ah see it, is that it took a revolution of a bihl-lion people for your darn short to work out." - "Event driven" investing at Farallon Fund specialized in predicting events that cause existing prices to be wrong e.g. takeover announcements, demergers, avoiding bankruptcy, meeting banking covenants, major economic events, hybrid security maturity dates etc. - `Pattern investing' used by the Medallion fund looking for patterns in the market. This applies research on French/English translation where the computer finds the grammatical rules not the programmer (using the Canadian Hansard which is conveniently

Published by Thriftbooks.com User , 11 years ago
It can become a guily pleasure reading about Hedge Fund managers success and extrodinary wealth. Mallaby's book does something bold in that is stands up for what is often a villified segment of the investment world. Mallaby humanizes characters like George Soros and Julian Robertson but also gives tremendous insight into their strategies, why those strategies worked, and how they occasionally failed. Whether you work in finance or are just a casual follower of the markets this book has a narrative flair that makes it an easy read but the depth to leave you with some important lessons and views.
Copyright © 2022 Thriftbooks.com Terms of Use | Privacy Policy | Do Not Sell My Personal Information | Accessibility Statement
ThriftBooks® and the ThriftBooks® logo are registered trademarks of Thrift Books Global, LLC