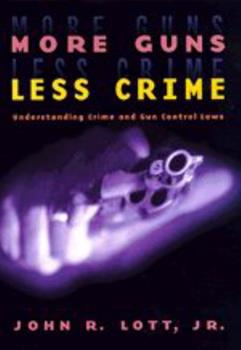 Does allowing people to own or carry guns deter violent crime? Or does it simply cause more citizens to harm each other? Directly challenging common perceptions about gun control, legal scholar John Lott presents the most rigorously comprehensive data analysis ever done on crime statistics and right-to-carry laws. This timely and provocative work comes to the startling conclusion: more guns mean less crime. In this paperback edition, Lott has expanded...

Published by Thriftbooks.com User , 15 years ago
I read this book , here in Brazil.I'm an agronomist(jobless) and I like to read books. The main idea of this book is simple.When the citizens have more guns, they become more safe and free.The so called "politically correct" puts this book and this believe, in a devilish thinking. Well, here in Brazil, we have terrible and draconian gun-control laws.Every year, there's more selling of air travels Brazil-Japan, than gun's sells to brazilian population.To have the right to carry any gun, is so dificult, that there's LESS than 1 to more than 2,000,000 souls in Brazil.To buy any ammunition is a nightmarish task, full of burocracy and dozens of papers.Almost all brazilian gun-shops are over. The result is that there's MORE crimes in Brazil, than any other coountry in the world.Iraq has LESS crime than Brazil.Venezuela who has gun control laws similars to Brazil's laws, also has big crime rates.Argentine and Uruguay, who have more liberal gun-control laws also have less crime than Brazil or Venezuela. This book shows that main victims of gun-control, in USA, were the poors, women, old people and colored people.This is the same who happens , here in Brazil and in everyplace and everytime.The criminals aren't heroes robbering from the richs and giving goods , to the poors.They robber and muder, exactly the poors and powerless people.This is right both in USA as in Brazil and everyplace in the world.When the bigoted government stoles the right to have/carry guns, the criminals, not the good people have advantages.My congratulations to the author of this excellent book.

Attracted to the book because of the critics...

Published by Thriftbooks.com User , 16 years ago
I have a concealed carry permit and am a member of a number of gun rights organizations. However, I simply am not one to use utilitarian arguments for such positions and so would normally not be interested in econometric modeling to defend something like the right to keep and bear arms. Nevertheless, as I began to find all these attacks on Dr. Lott -- even by miscellaneous gun rights advocates on USNET, I just had to see what it was all about. I have a fairly good technical background, especially in statistics. (I have an MS in Math which has included a fair amount of probability and statistics as well as having gone into actuarial science professionally.) And, I thought the book was pretty good, in fact, perhaps the best I have seen (for someone that doesn't typically buy such books), especially for what I would tend to expect out of social scientists. Furthermore, I think most of what I have seen in terms of criticisms of his methods on the internet are ridiculous pseudo-science. And finally, the source of his data seems pretty solid -- pretty much just various governmental agencies' data on crime, concealed carry laws, and so on. I suppose if I really wanted to know just how right he is or isn't, I would go independently collect the data and perform his regressions myself, but I do have a day job. Also, having read his book and many criticisms of it, I think the recent data for states having long since enacted concealed carry laws is not nearly as important as many seem to think it is. The issue is what happens when concealed carry laws are implemented. It is an interesting *separate* question as to the ongoing effects of having concealed carry laws on the books. If you include too much data from times distant from the event in question, you are likely to cloud the model and tests of such an hypothesis with all sorts of other factors that no one can realistically have accounted for in any model of something like crime rates.

The Kant of Gun Ownership

Published by Thriftbooks.com User , 20 years ago
In much the same way that Immanuel Kant devoted reams of dense prose to a philosophical foundation for the Golden Rule, John Lott piles chapter after chapter and chart after chart of thorough, systematic data analysis into support for propositions that you intuitively know to be correct.Armed citizens stop crimes.The more armed citizens you have, the lower your rate of violent crime -- criminals are stupid, but they're rational, and they don't want to get shot any more than you do.En route, Lott's analysis of the data reveals additional points that are very interesting and may be slightly less intuitive. For instance:1. Blacks benefit more from gun ownership than whites. On average, black Americans live in worse neighborhoods with higher crime rates than white Americans. When laws permitting citizens to carry concealed firearms are introduced, crime rates fall more dramatically in those neighborhoods, and black Americans benefit disproportionately.Yep, that's right. Gun control is racist.2. Women benefit more from gun ownership than men. Women's ownership of concealed weapon permits decreases the women's murder rate more than men's ownership decreases the men's rate. Women toting guns also significantly reduce the rape rate.Amen, sister. Gun control is sexist, too.3. Private gun ownership is cheap law enforcement. I don't mean vigilantism -- I mean deterrence. Private gun ownership lowers more crime per dollar spent than almost any other crime reduction measure...and the gun owners bear virtually all of the cost.And the list goes on. In addition to the statistical analysis (including abundant responses to academic and not-so-academic criticism), Lott recounts the reception of his initial paper on the subject, as well as the hardback edition of the book, and discusses the media mistreatment of school shootings and similar events. The book is dense, but as statistics-driven sociology goes, quite readable. Go buy it today. And then apply for your concealed weapon permit.

Published by Thriftbooks.com User , 22 years ago
Here are just a few of the academics who have expressed admiration for Lott's pathbreaking book. Few people have both the real world law enforcement experience and extenstive research background to take on this explosive issue of guns and crime. This is what the experts in the field think of Lott's book. (The quotes are from the paperback version of the book.) "More Guns, Less Crime is one of the most important books of our time." -- Thomas Sowell, Professor, Stanford University "John Lott has done the most extensive, thorough, and sophisticated study we have on the effects of loosening gun control laws." -- Gary Kleck, Professor, Florida State University "Lott has done us all a service by his thorough, thoughtful, scholarly approach to a highly controversial issue." -- Milton Friedman, Nobel Prize winning economist, Stanford University "A model of the meticulous application of economics and statistics to law and policy." John O. McGinnis, Professor, Cardozo Law School "His empirical analysis sets a standard that will be difficult to match. . . . This has got to be the most extensive empirical study of crime deterrence that has been doen to date." -- Public Choice "The standard reference on the subject for years to come." Stan Liebowitz, Professor, University of Texas "This book will - or should - cause those who almost reflexively support the limitation of guns in the name of reducing crime to rethink their position." -- Steve Shavell, Professor, Harvard University Law School The book has gotten similar positive comments from those working in law enforcement. This is a great book.

Important book on a critical issue

Published by Thriftbooks.com User , 22 years ago
Lott's book grows out of the largest, most extensive study ever undertaken on the impact of concealed weapon laws on crime rates. Where most gun studies look at state-level data or small snapshots, Lott used county level data over a sixteen year time-series. At the heart of his study are complex econometric models and and other statistical analysis. But the text does a superb job guiding noneconomists through the methods and results. Lott's original paper on this subject triggered a firestorm of criticism. One of the most interesting parts of the book is the chapter where Lott addresses those criticisms.Gun control debates usually have more heat than light. I found this book a refreshing change. It is focused on facts, its conclusions are drawn from rigorous analysis, and its tone is not strident.
Trustpilot
Copyright © 2022 Thriftbooks.com Terms of Use | Privacy Policy | Do Not Sell or Share My Personal Information | Accessibility Statement
ThriftBooks® and the ThriftBooks® logo are registered trademarks of Thrift Books Global, LLC