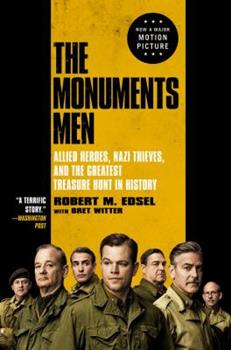 At the same time Adolf Hitler was attempting to take over the western world, his armies were methodically seeking and hoarding the finest art treasures in Europe. The Fuehrer had begun cataloguing the art he planned to collect as well as the art he would destroy: "degenerate" works he despised. In a race against time, behind enemy lines, often unarmed, a special force of American and British museum directors, curators, art historians, and others,...

Published by Love it , 1 year ago
I was very pleased to receive this book as I am a big fan of the movie. I look forward to reading the book.

Published by Thriftbooks.com User , 13 years ago
Mr. Edsel has produced a true gem by revealing this little known story about the Monuments Men to the world. The Monuments Men are an important element of art history of the era. Edsel truly honors the Monuments Men by preserving their stories in this book. The author is a gifted story teller that helps give each Monument Man (or woman) a distinct personality and character. This book gives a more in depth understanding of what the Monuments Men endured, continuing from the first book, Rescuing Da Vinci. This book is facinating and hard to put down. Robert Edsel is a true American hero and I'm happy to give this book my full endorsement.

Published by Thriftbooks.com User , 13 years ago
This is a great read. There are several other books on the subject, but all are very academic in nature and tend to omit the exciting adventure and personal stories of the Monuments Men. As the title suggests, this is really a story about the Monuments Men themselves. Mr. Edsel has done a very good job bringing the characters who are at the center of the story to life. His use of the Monuments Men's personal letters interspersed throughout the book really helps to develop their characters and they allow the reader to truly connect with the Monuments Men. I also enjoyed seeing some Nazi documents inserted in the first section. Those who are well read on the subject know about the Nazis' plans to confiscated Jewish owned art collections and also Hitler's desire to build the Führermuseum in Linz with his massive collection, but rarely do you get a chance to see the actual documents ordering the massive looting of art. Mr. Edsel's accounts of the events at Altaussee were obviously well researched as he offers some new opinions and much more detailed explanations than most books offer about what happened in the final days of the war when there were attempts to destroy the mine. I think anyone who enjoys books on WWII, art history, or even just a good adventure or love story will really like The Monuments Men. It is an engaging book, and it moves quickly so it is easy to finish in a few days.

Published by Thriftbooks.com User , 13 years ago
The Monuments Men shows what a gifted storyteller Mr. Edsel is along with his co-writer Bret Witter (loved Dewey as well!). Following up to his first book Rescuing DaVinci and the documentary film The Rape of Europa (co-producer)- Monuments Men takes us even further into the adventures of 10 of the men and women serving in the Monuments Fine Arts & Archives section. I would have read it in one sitting if I had the time!! You will never again look at art or WWII in the same way once your eyes are opened the awe-inspiring stories of these inviduals and the role they played in rescuing art and other cultural treasures from the hands of the Nazi thieves. I highly recommend the film The Rape of Europa as a companion to this memorable story - an enlightening documentary of the highest quality rarely seen in today's media which seems more concerned with the latest celebrity shenanigans or mindless reality shows.

Published by Thriftbooks.com User , 13 years ago
The most devastating damage and acts of looting of art objects in the annals of history took place during World War Two.These were perpetrated by the Nazi hordes ,carefully directed by the Fuhrer himself.The Nazi army was perpetually pillaging the finest art in Europe.The vain Goering and Alfred Rosenberg were among the main culprits involved in those brutal crimes against the human creative talent. Fortunately,there was a Western Allied effort to mitigate combat damage, primarily to structures-churches,museums, and other various monuments.In the course of those brutal years, particularly during 1943-1944,the Allies paid much more attention to finding and protecting cultural items which were stolen from their owners,many of which were Jews.The bosses of the Third Reich transported more than five million cultural objects to many sites in Germany, where they hid them , hoping that one day they would not only be the masters of the world, but also the masters of art. More than 350 men and women served as Monuments People.This number was culled from thirteen nations.In the end, only a handful of them were active and this book is their story.It was the responsibility of this group to save as much of the European culture as it could. Mt. Edsel has been living in Florence ,Italy, in the 1990s when he wondered how so many of Europe's monuments and other works of art could have survived this unprecedented orgy of destruction.Thus, he set out to conduct a very careful process of extremely meticulous research which led him ultimately to interview those soldiers who have risked and dedicated their lives pursuing this mission.Many of them were art curators,scholars, educators, architects and archivists in their early forties.There are captivating chapters on the fate of museums in Western Europe, such those in France, Belgium,Holland and Italy.You will meet well-known paintings and the fate of them.Among these are the "Mona Lisa" and "The Night Watch".There arealso letters written by the heroes of this book to various relatives of theirs and some directives given or sent to Nazi officials. Mr. Edsel's forte in the book is especially interesting when describing what happened during and after 1945 in Altaussee, Austria- a site where many tunnels served as sanctuaries for an enormous number of stolen works, as well as another chapter devoted to the Merkers salt mine in Germany where the largest paintings from the Kaiser-Friedrich Museum in Berlin were placed for safekeeping (along Germany's gold reserve and paper currency). We are also informed that the castle of Neuschwainstein, which was built by Mad Ludwing of Bavaria in the ninetennth century, served as a key Nazi repository of the greatest works of art stolen from France.It took the Monuments Men six whole weeks to empty it.Some of the stolen art objects belonged to the Rothschild collection in France. This is an originally told and well-researched chapter with a happy end, not only because of the outcome o
Trustpilot
Copyright © 2022 Thriftbooks.com Terms of Use | Privacy Policy | Do Not Sell or Share My Personal Information | Accessibility Statement
ThriftBooks® and the ThriftBooks® logo are registered trademarks of Thrift Books Global, LLC