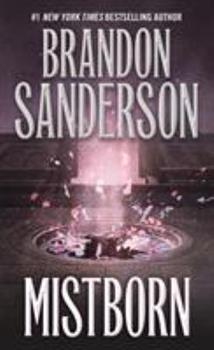 Was not in acceptable condition

Published by Bethany , 5 months ago
I don't remember if I bought good or acceptable, but either way half of the book and cover was bent backwards and there is water damage to the last quarter of the book. I really wish my definition of good or acceptable was the standard. It has been almost 5 months now and I am still trying to work out the previous folds. Its a great story, just the book was in terrible shape when I got it.

As always, Brandon Sanderson knocks it out of the park

Published by Ki , 1 year ago
As with anything by Sanderson, the world he builds is absolutely consuming, and the characters more so. One of my favorite fantasy books of all time.

Published by Thriftbooks.com User , 13 years ago
Great Novel. Brandon Sanderson is a great choice for the author to finish Robert Jordan's Wheel of Time Series. Mistborn: The Final Empire is a well written and takes place in a well thought out world. The magic system that Brandon created for this wold is one of the best and most unique that I've seen. The sequel novel, Mistborn: The Well of Ascension is just as good, if not better.

Published by Thriftbooks.com User , 13 years ago
Brandon Sanderson never disappoints. I have read "Elantris" several times. Also his unpublished "Warbreaker." His characters have depth and personality. As I read I feel as if I know each one. There are always surprising twists to his plots. I intend to buy and read everything he writes.

Published by Thriftbooks.com User , 13 years ago
I read a lot of sci-fi and fantasy and sometimes, with fantasy particularly, it gets a little old. The Mistborn series is a breath of fresh air and offers a new take on magic, races, etc. The great set of characters, mind blowing action and tight, flowing writing make this the best book I've ready all year.

great start to a series

Published by Thriftbooks.com User , 15 years ago
I was a fan of Sanderson's first novel, Elantris, though the novel had some pretty clear flaws. I'm an even bigger fan of his follow-up, Mistborn, a book that has all the plusses of Elantris without the problems. Mistborn takes places in an ashen, devastated world where the "Skaa" are a brutally downtrodden majority who do all the work for the aristocratic minority of the Great Houses, who themselves are ruthlessly dominated (in differing ways) by the Lord Ruler, a religious godhead. Supposedly immortal--he's ruled for centuries via his magic power and his two competing bureaucracies--the "obligators" and the Inquisitors--a fearsome secret police who have steel rods impaling their eyes and who are near impossible to kill. There are also ominous hints that the Lord Ruler also has been protecting the people of Mistborn from some great evil known as the Darkness. The Skaa have seemingly lost any hope of rebellion over centuries of failed attempts but this all changes with the appearance of Kelsior--a Skaa/noble halfbreed who is a "Mistborn Allomancer", one who can "burn" swallowed metals that fuel magical/superhuman abilities, such as greater strength and endurance, greater use of the five senses, etc. This magical system, a rare stroke of originality in a genre that too often lazes along with the same old tropes (oral spells, wizard's runes, etc), is one of the true pleasures of the novel. It's also nice to see a system with some strong limitations to it--there are only ten metals that have the effect, one is limited by how much of the metal one has, and most allomancers have the ability to burn only one metal. Kelsior, though, and his young female apprentice Vin, are true Mistborn, able to burn all ten. The reader learns about the system sometimes through Kelsior's usage and sometimes through his tutelage of Vin, thus avoiding the clumsy early exposition of many fantasy novels as well as teasing out the explanation, adding a sense of suspense and mystery. The basic plot involves Kelsior's gathering of a group of Skaa thieves to do the unthinkable--overthrow the Great Houses and the Lord Ruler. The secondary (though equally important) plot is Vin's coming-of-age as she is tries to move from being an orphaned street thief Skaa who trusts nobody to a full-fledged mistborn who can also play the role of an aristocratic lady. As mentioned, there is a lot to like in Mistborn. The magical system. The focus on politics and economics as a means of rebellion (as opposed to "Dark lord bad. Do bad things with swords. We use swords and kill dark lord".) The character development of Vin throughout the novel. The character development of Kelsior. The suspense over the impending rebellion. The likeability of the side characters, who while not as fully developed as Vin or Kelsior, have their own distinctive and enjoyable personalities. The humor that shows up now and then. The quick pace of the action. The twists and turns of plot. Good a

Published by Thriftbooks.com User , 15 years ago
...then you're going to love this! The world this story takes place in is governed by a small martial force with a dictator in control. The oppressed people, here called 'skaa' instead of slaves, are treated poorly, and it falls to the efforts of a charismatic leader, Kelsier, (who is much like V in Vendetta) to right the wrongs that are being done. Kelsier takes on a female protege, Vin, who is able to master the same scientific/magical forces he can, and trains her in the ways of fighting and spreading dissension. There are some great action scenes throughout the book, as well as some marvelous Game of Throne moments. This book was a terrific read, and I had a hard time putting it down, staying up much later than I wanted to on successive nights so that I could find out what happened next. I highly recommend it!
Copyright © 2020 Thriftbooks.com Terms of Use | Privacy Policy | Do Not Sell My Personal Information | Accessibility Statement
ThriftBooks® and the ThriftBooks® logo are registered trademarks of Thrift Books Global, LLC