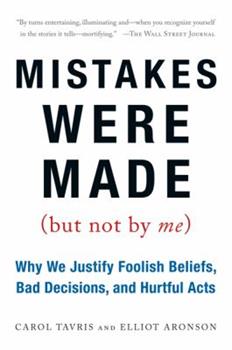 Mistakes Were Made (But Not by Me): Why We Justify Foolish Beliefs, Bad Decisions, and Hurtful Acts

by Elliot Aronson and Carol Tavris

Why do people dodge responsibility when things fall apart? Why the parade of public figures unable to own up when they screw up? Why the endless marital quarrels over who is right? Why can we see hypocrisy in others but not in ourselves? Are we all liars? Or do we really believe the stories we tell?Backed by years of research and delivered in lively, energetic prose, "Mistakes Were Made (But Not by" Me")" offers a fascinating explanation of self-deceptionhow...

Published by Eva , 11 months ago
I'm 20 years old, and growing up in the age of hyperfixation of outward brand/presentation, this book is an excellent record-scratch that we all need. This book teases apart how two people can start at such similar places, yet, through a minuscule decision, end up making strong claims about how the other is terribly wrong, evil, and mistaken. Though this book is an easy read, it's almost impossible to get through a chapter without having at least one "oh s**t!" moment of realization about your own beliefs and life.

Published by Thriftbooks.com User , 15 years ago
Ready for a whirlwind tour through time and space, from the Crusades and the Holocaust to the war in Iraq, from recovered memories and the fallacies of clinical judgment to false confessions, wrongful convictions, and failed marriages? Then this is the book for you. What ties these disparate topics together, according to tour guides Carol Tavris and Elliot Aronson, is the notion of "cognitive dissonance," which has been creeping into popular awareness in recent years. Cognitive dissonance is the uncomfortable feeling created when you experience a conflict between your behavior and your beliefs, most specifically about who you are as a person. ("I'm a good person, I couldn't do this bad thing.") To reduce dissonance, people engage in a variety of cognitive maneuvers, including self-serving justifications and confirmation bias (paying attention to information that confirms our beliefs while discounting contrary data). Tavris and Aronson, both top social psychologists and excellent writers to boot, make their point through the repeated use of a pyramid image. Two people can be standing at the top an imaginary pyramid and can undergo the same dissonance-inducing experience. Person A processes the experience accurately, which leads him down one side of the pyramid. Person B engages in a series of defensive maneuvers to reduce cognitive dissonance that eventually lands him at the opposite side of the pyramid. Once at these opposite poles, the two can no longer recognize their initial similarities, and see each other as unfathomable and even dangerous. A particularly compelling, real-life example is two men who experienced a terrifying episode of sleep paralysis in which they saw demons attacking them. One recognized it for what it was; the other became convinced that he had been abducted by aliens and had even fathered a set of twins with an alien partner. The book could have been called, "Cognitive Dissonance: What It Is and How to Combat It," but then it wouldn't be selling like hotcakes. It provides a thorough overview of the social psychology research on this topic, much of it quite interesting and all of it engagingly presented. The authors conclude by offering suggestions for reducing the impact of cognitive dissonance on individuals and cultures. One remedy is greater oversight, such as mandatory videotaping of all police interviews of suspects, independent commissions to investigate prosecutorial misconduct, and greater transparency in the academic review process. Another is attention to Americans' cultural fear of making mistakes. Intelligence is acquired, not innate, the authors argue, and mistakes are a necessary part of learning. I particularly enjoyed their examples of prominent individuals who forthrightly owned up to mistakes, including a therapist who had engaged in recovered memory treatment, a prosecutor who had obtained the conviction of an innocent man, and - last but not least - Oprah Winfrey.

At first slowly, then quickly

Published by Thriftbooks.com User , 15 years ago
Or so say Tavis and Aronson on how we lose our ethical grip---we make a small slip, say to ourselves it is not that bad, and our minds rationalize the next slip. From lunch with a lobbyist to a golf outing in Europe is not---when the mind puts its mind to it---that big a leap. Their discussion of confirmation bias, one of the worst breeders of bad decisions is outstanding and undertandable. And the chapter on how the police get the innocent to confess is chilling. There are all sorts of useful tips.Want to co-op an enemy? Get her to do a favor for you; her mind will say, "I do not do favors for jerks,and because I do not, he must not be that big a jerk." The mind can not hold two thoughts at once, so it bridges the dissonance. At 236 pages, the book is long enough to be worthwhile, but short enough to read on a vacation. Anyone interested in persuasion and how our minds work will find the read a useful one.

Published by Thriftbooks.com User , 15 years ago
Why do people refuse to admit mistakes - so deeply that they transform their own brains? They're not kidding themselves: they really believe what they have to believe to justify their original thought. There are some pretty scary examples in this book. Psychologists who refuse to admit they'd bought into the false memory theories, causing enormous pain. Politicians. Authors. Doctors. Therapists. Alien abduction victims. Most terrifying: The justice system operates this way. Once someone is accused of a crime - even under the most bizarre circumstances - the police believe he's guilty of something. Even when the DNA shows someone is innocent, or new evidence reveals the true perpetrator, they hesitate to let the accused person go free. This book provides an enjoyable, accurate guide through contemporary social psychology. So many "obvious" myths are debunked as we learn the way memory really works and why revenge doesn't end long-term conflict. Readers should pay special attention to the authors' discussion of the role of science in psychology, as compared to psychiatry, which is a branch of medicine. I must admit I was shocked to realize how few psychiatrists understand the concept of control groups and disconfirmation. Psychoanalysis in particular is not scientific. The authors stop short of comparing it to astrology or new age. This book should be required reading for everyone, especially anyone who's in a position to make policy or influence the lives of others. But after reading Mistakes were Made, I suspect it won't do any good. Once we hold a position, say the authors, it's almost impossible to make a change.

Published by Thriftbooks.com User , 15 years ago
This page-turning read takes you through the myriad ways in which a human urge toward self-justification warps personal lives and contaminates public discourse. The authors ask: "Why do people dodge responsibility when things fall apart?" They explain, with abundant examples. Even more important, they draw readers painlessly through the evidence about self-justification, much of it based on research into the contours of memory distortion. No one escapes the authors' withering gaze: political leaders who lie to cover up, bosses who kick downward and kiss upward, marriage partners who whine. A book about the defenses that people erect for bad decisions and hurtful acts might easily turn into an exercise in "bubba psychology", or giving folk wisdom the patina of scholarship. But Tavris and Aronson are much better than that. They are serious, renowned psychologists with a knack for telling arresting stories. They have an eye for counter-intuitive and revealing details. Each chapter tells you things you didn't know, or illuminates experiences you thought you understood, but come to see in a fresh light. In short, you'll see a bit of yourself as well as others in Mistakes Were Made. You'll be thankful for its insights.

Published by Thriftbooks.com User , 15 years ago
I must humbly state that this is the most exciting and captivating book that I have read in many years. A clear 5-STAR book! It graphically and creatively illustrates the core principle of cognitive dissonance, which explains why good people justify bad behavior and why we increasingly deny responsibility for our actions. It then goes on to empower us with a roadmap showing how we can reverse this trend. Everyone, from the lay public to the helping professionals and academics, should read this book. Most importantly, this book should be read by officials of our present government, since their patterns of self-justification have centrally led to war, death and disgrace of America's image in the world. Carol Tavris and Elliot Aronson, both luminaries in the field of social psychology, have really struck a chord with this book. It is destined to be the classic manual for understanding the nature of resistance and conflict within ourselves and in our relationships. While it is written in a casual story-telling style, distilled wisdom from years of social psychology research on self-justification is subtly and gently blended in. The innovative thinking and clarity of presentation in this book are awesome. Mistakes Were Made, But Not By Me will change the way you view yourself, your thoughts, your family, your friends, your partners, and your government---Indeed, a book for all reasons. In sum, "Don't believe everything you think," but DO buy this book.
Trustpilot
Copyright © 2022 Thriftbooks.com Terms of Use | Privacy Policy | Do Not Sell or Share My Personal Information | Accessibility Statement
ThriftBooks® and the ThriftBooks® logo are registered trademarks of Thrift Books Global, LLC