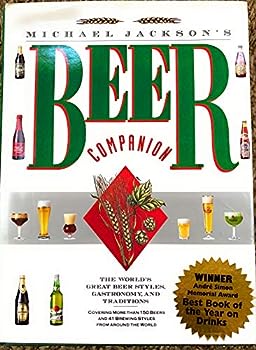 This description may be from another edition of this product. Jackson here presents a knowledgeable and civilized survey of the various and sundry beers imbibed around the globe. You'll learn, for example, that Ninkasi was a Sumerian goddess of brewing, and that...

Great info on most beer styles

Published by Thriftbooks.com User , 16 years ago
As a homebrewer, I found this book to be very helpful in creating recipes for various styles of beer. He goes into good detail about them and provides descriptions of a few primary examples of styles. If I have any criticism it would be that I would have done away with the "cooking with beer" articles at the end of the book (you can find better and more comprehensive info elsewhere) and instead added more info about obscure beer styles such as American Stock Ale, Baltic Porter, Kellerbier, Finnish Sahti, Kentucky Common Beer, etc.

Published by Thriftbooks.com User , 17 years ago
Author Michael Jackson is probably my favorite beer writer and critic. He has traveled all over America and the world, attending events, visiting breweries, and tasting beer. He has extensive knowledge on the subject of beer and he shares that knowledge in this book. Jackson writes this book in a very simple, easy to understand manner. He doesn't use long words that require the use of a dictionary to understand. He keeps it simple while he educates the reader sbout the subject of beer. He begins by talking about the history of the world's greatest beverage, from the ancient days when beer was discovered all the way to the present day and the resurgence of craft- brewing. He talks about the various ingredients used in beer and explains how best to match beer with food. The bulk of the book covers each individual style of beer, with facts, trivia, and full- color photographs of beer labels, breweries, and other beer- related things. Speaking of the photography, I found that it really adds to the enjoyment and understanding of the subject matter. It would not be very exciting to read a book about beer that contained nothing but text. The pictures really make a difference with this type of book. They keep the reader entertained and informed about different aspects of beer and the brewing industry. Overall, this is one of the best books on beer I have ever read. Grab a copy and see for yourself how much there is to know and love about the greatest beverage known to man- beer!

Published by Thriftbooks.com User , 19 years ago
Michael Jackson has long been considered one of (if not the) world's foremost experts on beer (so much so that those who love beer think of this Michael long before the putative Pop King Michael). And this book only adds to that well-deserved reputation. Jackson's "Beer Companion" is loaded with color photos of many beer styles, labels, breweries, and watering holes and gives a decent history of the various brewing styles and tastes (very fascinating!). Mr. Jackson provides advice for what beers go with what foods (and it does matter) and suggests some good drinking establishments (and breweries) to visit if you're a world traveler. A good drinking companion indeed. Unfortunately, the book is somewhat large (and annoying to travel with) so you may be better off reading it first, taking some notes, and bringing the (also essential) Pocket Beer Guide with you instead. Enjoy.

Published by Thriftbooks.com User , 22 years ago
michael jackson has produced a guide to the beer styles of the world that reads easily and is nice to look at. the photography in this book makes it very accessible to newbie beer lovers, while the content makes for interesting reading. this is not a "how to brew" book; it is a book about classic beer styles and the breweries that produce them. jackson possesses a duality of talent that surpasses everyone else in his field: his experienced palate and his extraordinary descriptive writing skills. his tasting notes are simply excellent. a very good book from the man who has visited more breweries than anyone else in the world.

The Best Beer Guide Yet

Published by Thriftbooks.com User , 24 years ago
Jackson was among the first (if not the first) authors to write a guidebook to beer and he remains the best. The Beer Companion is impeccably researched and comprehensive. Jackson's colorful writing style, with occasional touches of wry humor, gets the reader through 280 pages on beer without ever sounding repetitive. In addition, the book contains copious photographs and would look good on anyone's coffee table. Although it covers a lot of the same ground as Jackson's earlier World Guide to Beer, it is more up-to-date and easier to read. Unlike the World Guide, which was organized by country, the Beer Companion features chapters on each of the world's great beer styles. This makes it a more usable reference for us amatuer brewers.
Copyright © 2020 Thriftbooks.com Terms of Use | Privacy Policy | Do Not Sell My Personal Information | Accessibility Statement
ThriftBooks® and the ThriftBooks® logo are registered trademarks of Thrift Books Global, LLC