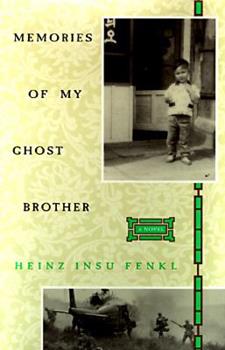 Memories of My Ghost Brother

A young Amerasian comes of age as he grows up in the Korean city of Inchon and struggles to come to terms with his own identity and with his memories of a lost half-brother, whom his Korean mother sacrificed to marry his American father.

Published by Thriftbooks.com User , 18 years ago
I highly recommend this sensitive autobiographical account of a young boy growing up in the 60's in a country where the tradition, prejudice and yearning for a better life ran deep. Heinz Fenkl paints his life as a bi-racial child in Post-war Korea with realism and compassion. Born to an alienated German-American G.I. father and a Korean mother, Fenkl, in a way is displaced from the beginning and learns to live in the limbo world where cultures clash and mingle but neither claims him fully as its own. After years of brutal Japanese occupation and the devastating war, Korea was left barren for people to fend for themselves. The author testifies people's hardship including his own without excuses or pity but with humor and an open mind. The characters in his book are neither good nor bad-yet richly human and complex. The folktales told in the book are welcome antidotes that offer not only a glimpse of the rich oral tradition but also the redeeming quality of the storyteller, the uncle, who otherwise is a morally challenged character. Memories of My Ghost brother is a simple yet compelling book dealing with difficult issues like racism, death, the spirit realm, poverty, and human sufferings under all too human circumstances. The message I got from reading this book is that given a choice, what makes us better is to have In-Jung, the compassion for others, which in turn presents us hope for a better future.

Published by Thriftbooks.com User , 22 years ago
I don't know why I like this "novel"/memoir so much, but it is a terribly moving and poweful story. Much of it is written in the deceptively simple prose of a child-narrator, though the older self "looks back" in reflective, lyrical passages that reminded me of Hemingway. I was at first put off by the first chapter: elements of haunting, mysticism, a child narrator. . .uh oh, where are we going? But as the story rolls along, I found myself more and more immersed in the story of a young, biracial child growing up near a US military base in Seoul. Descriptions of life at school, in the streets, in the GI camp were engrossing, and Fenkl's refusal to transliterate and translate some Korean words or expressions and not others was fascinating for me as a Korean American. The ethnographic folklore included here are always grounded in the harsh reality of a dim bulb in a spare room, the humanized character of a drunk, coarse uncle, and through all the traces of American culture that have infiltrated Korea. There are psychological and literal "displacements" described here that have produced painful cleavages in the family. The personal impact of social and historical realities are portrayed here in all their harshness, but this is absolutely not a sentimental "victim" story of oppression. I found myself identifying with the child-narrator, absorbed by his story, and in the end, powerfully moved.

Published by Thriftbooks.com User , 23 years ago
This a wonderfully imagined and wonderfully told story, full of realism and magic. Fenkl does an amazing job of interweaving korean folklore and asian cosmology with the story of his (semi?)fictional counterpart. For those interested in the lives of mixed-race children and for those interested in the form of the bildungsroman and the memoir, this is a MUST. Those who know korean and chinese are in for a special polyglot treat in the hidden structure of the book.

Published by Thriftbooks.com User , 24 years ago
Although I did not know him well, Heinz and I graduated Vassar College together in 1982. Apparently, Heinz was a better student of Professor William Gifford than I was. Fenkl's story of a young Korean-American growing up in Korea after the war is simple and honest, a child's non-judgmental view of a unique time and place. But the reader should not confuse Heinz' writing style from his precious content. We are drawn to the boy (is that a picture of young Heinz on the cover?) and his story, part horific, part fabulous fantasy, part loving tribute. We are also witness to post-war Korea, a setting virtually unknown to us, full of interesting people, events and ideas. I eagerly await Heniz' next book -- perchance another installment of the same story? I hope so.

Published by Thriftbooks.com User , 24 years ago
This novel/memoir is a revelation. The Amerasian experience which is still such a largely untold and suppressed history in America is vividly and tenderly told in this book. Because the opening paragraph of the novel is so surreal and pained, I was expecting a more solemn novel and was pleasantly surprised by the many moments of humor and childlike charm it contains. Fenkl is wise to tell his story through the voice of a child. It really makes this not so common experience, if not a universal one, one that is easy to relate to. I highly recommend it.
Trustpilot
Copyright © 2022 Thriftbooks.com Terms of Use | Privacy Policy | Do Not Sell or Share My Personal Information | Accessibility Statement
ThriftBooks® and the ThriftBooks® logo are registered trademarks of Thrift Books Global, LLC