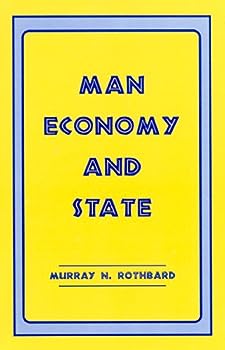 Man, Economy and State : A Treatise on Economic Principles

The Best Treatise on Economics ever written...

Published by Thriftbooks.com User , 17 years ago
This is simply the best treatise on economics that has been written upto date in the human history. Ludwig Von Mises 'Human Action' comes close but it is too dense for a layman.This book: Man, Economy and State, written by Murray N. Rothbard can make an economist out of layman if he puts time and efforts into reading this book and understanding all its concepts. Murray Rothbard starts with the basic axiom that: Humans Act. He further states that Humans Act to relieve some sort of unease and approach a better state of satisfaction. Based on these two axioms he builds up the entire edifice of Economics using impeccable logic and superb reasoning. I had read Carl Menger's 'Principles of Economics' before this and thus had a basic understanding of economics. But EVEN if you do not have that, do not worry. This book starts with very basic terms and explains the concepts of Supply and Demand, Interest Rates, Profit/Loss, Production Structure etc. in a clear and thorough manner. Murray Rothbard furthermore refutes the Socialist, Keynesian(gradual socialist) and neo-classical schools of economics. His elucidation of fallacies of Interventionist economics is so logical that one cannot help but laugh out loud on the stupidity of fools like John Keynes, Karl Marx and their disciples. Also you will not see much mathematics in this book. Subjective valuations of goods/services by humans cannot be quantified. This seems pretty logical to most of us but many who call themselves "economists" simply miss this insight. Read this book and you will have a far better understanding of how the world works. You will also understand economics better than most economics college professors and government-employed economists.

Published by Thriftbooks.com User , 20 years ago
Murray Rothbard was one of the most prolific writers in the libertarian tradition in the 20th century. His published work covered political theory, social theory, history, and economics. I've read most of Rothbard's books and consider Man, Economy, and State to be his greatest achievement. As an introductory matter, Rothbard studied under Ludwig von Mises, this century's premier Austrian economist. Man, Economy, and State is a basic treatise on economics, drawing on the insights of the Austrian school. It starts with the fundamentals of human action, and then goes on to discuss prices, production, monopoly theory, money, and other matters. This work is lengthy and some parts are quite theoretical, but that shouldn't stop even the tyro in economics from reading it. Rothbard starts with "Crusoe economics," that is with the individual actor. From this, he introduces the reader to the basics of economic reasoning. Only after this foundation is constructed does Rothbard discuss more complex issues. If you want to learn to "think like an economist" this book is a great place to start. I'm no economist -- and some of this work was a little beyond me (although I like to think I could have mastered it if I had enough free time) -- but even those chapters that are the most theoretical contain numerous insights into more "practical" matters.Unlike von Mises and most other Austrians, Rothbard was an anarchist. His opposition to government led to some unusual positions. For example, he viewed patents as contrary to the free market. [p. 652-60.] He also taught that blackmail would be legal in a free society. [p. 443 n. 49.] I'm not sure I agree with these conclusions, but they are always presented in a thought-provoking manner.

Published by Thriftbooks.com User , 22 years ago
This work is perhaps the most thorough and consistent exposition of capitalist economics in existence. Murray Rothbard built his work upon the epochal contributions of the Austrian school of economics, primarily the ideas of the great Ludwig von Mises. However, Rothbard did not merely rehash what they had taught him, he also ironed out their ambiguities and shortcomings in order to construct a mighty, rock solid edifice. Despite the size of this work, it is as well suited to the needs of nascent libertarians, as it is to those of more advanced students. Rothbard begins with the very foundations of human action, and builds upon them logically in order to explain in depth the complexities of the market economy. At the same time, he provides a powerful assault upon socialism and other forms of anti-market ideology by contrasting these systems to capitalism and refuting widely held anti-market myths. The only significant shortcoming that I can think of is the truncated form of Rothbard's brilliant critique of all government action. Apparently, the original publishers of this work were taken aback by his anarchistic conclusions, so, in order to comprehend the full weight of his analysis, it will be necessary to seek out his path-breaking work, "Power and Market." Together, these works represent one of the greatest defenses of individual liberty and civilization ever to be produced.

A refreshing antidote to mainstream Micro and Macro

Published by Thriftbooks.com User , 22 years ago
Man, Economy and State is more than a refined rehashing of Mises' Human Action. It includes thorough analyses of many topics Mises did not tackle, or did not tackle so well. Most notably, Rothbard exposes the logical absurdities embedded in Keynesian and monetarist theories. I found the work both more satisfying and more intellectually invigorating than I expected. Rothbard's clear, deductive prose, aided with just a touch of humor and sarcasm, makes for some wonderful reading. I know I will read this one many, many times before I feel I have really absorbed everything this book has to offer.I especially urge educated laymen and students of economics to give this book a good reading before mindlessly accepting the trendy mathematical scribbling that has become the code language of ivy-league economists. Purposive, motivated individual ACTION is the ultimate cause of all economic phenomena. Therefore, economics must be described in terms of cause and effect relationships originating in the attempts of individuals to employ scarce means to satisfy unlimited wants. Economics, when described through functional equations, can never contain any meaningful insights that could not be expressed more precisely through verbal logic, as functional relationships lack information on causality. In the social sciences they are likely to be the source of false deduction and inference. The result is a hopelessly confused pseudo-science that ignores most of what makes economics useful.Because Rothbard understands this from the get-go, he is able to give us 900 pages of meaningful logic.Thank you, Murray Rothbard!

Published by Thriftbooks.com User , 23 years ago
Murray Newton Rothbard's development of economic theory from the axiom of human action is brilliant from start to finish. Building on Ludwig von Mises's masterwork _Human Action_, Rothbard in effect removes Mises's work from its neo-Kantian setting and places it on a foundation of Aristotelian realism (though this fact will not be obvious without study of Rothbard's later work, notably _The Ethics of Liberty_). Rothbard systematically and rigorously develops all of economic theory from the axiom that human beings act to achieve ends in a world in which specific and delimitable causes have specific and delimitable effects. In so doing, he wrote a work that, almost three decades after its publication, still serves as a comprehensive introduction to Austrian School economics. And no wonder: Rothbard viewed Austrian economics particularly and the "science of liberty" generally as systematic philosophy, not as the mere collection of statistical facts and "model-building." The result is a highly readable volume that reads more like a philosophical treatise than a standard "economics" textbook. Anyone who loves liberty and thinks _ideas_ are important will love this volume. Keynesians and econometricians need not apply.
Trustpilot
Copyright © 2022 Thriftbooks.com Terms of Use | Privacy Policy | Do Not Sell My Personal Information | Accessibility Statement
ThriftBooks® and the ThriftBooks® logo are registered trademarks of Thrift Books Global, LLC