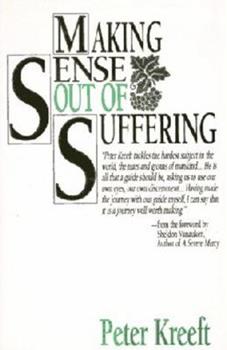 Making Sense Out of Suffering

This book is for anyone who has ever wept and wondered, "Why?" Peter Kreeft observes that our world is full of billions of normal lives that have been touched by apparently pointless and random suffering. This account of a real and honest personal quest is both engaging and convincing. Written from a deep well of wisdom derived from experience and careful observation, Making Sense Out of Suffering is a book for empty hearts, not full ones. Read it...

What's wrong with all the other answers

Published by Thriftbooks.com User , 15 years ago
Peter Kreeft wrote a book twenty years ago that I've just gotten around to reading. I wish I had read it twenty years ago. Kreeft is a philosophy professor at Boston College, and his book Making Sense Out of Suffering is a look at the implications of suffering in philosophy and theology. His audience is the skeptic, the person of uncertain beliefs and convictions who is tossed about in this world of sorrow and pain and is struggling to find some way to understand existence in light of that raw fact. One thing that I really enjoyed about his book was his attention to various traditions and schools of thought. He starts with this observation: "By the time you finish reading this book, ten thousand children will starve, four thousand will be brutally beaten by their parents, and one thousand will be raped. If you took a poll asking who the profoundest thinker of all time was, the man who would probably come out second, after Jesus, is Buddha. Buddha's entire philosophy centers around his answer to the problem of suffering. How can we not hear him out?" Gotama Buddha's voice is only the first of many which we must hear out. If we follow Kant's suggestion that the great questions revolve around God, the world, and the soul, then the question of suffering becomes a question of the existence of a supreme being and its relationship to the human world. The difficulty of suffering, for belief is that we are asked to accept the following: 1. God exists. 2. God is all-powerful. 3. God is all-good. 4. Evil exists. How can this be? Kreeft summarizes the possible alternate theologies, which differ on these points, either bluntly or subtly. For examine, the atheist may deny that God exists. Or one may more subtly say that God exists, but only as a psychological concept, thereby draining Him of real force and existence. All of these alternate answers have implications for the meaning of human suffering. Kreeft's goal on the other hand, is to affirm Christian belief and answer a resounding "yes" to all these questions. The task then becomes making Christian belief intellectually credible and defensible. His technique is interesting -- rather than argue from cohesive deductive principles, Kreeft takes successive passes at the problem and allows answers and ideas to emerge suggestively, tentatively, rather than authoritatively and dogmatically.

Comfort for the broken-hearted contemplative

Published by Thriftbooks.com User , 21 years ago
Peter Kreeft has done a masterful job of creating a readable work that can both address the confounding issue of God and suffering, and at the same time bring comfort to a wounded believing heart. Though rightfully indebted to C. S. Lewis, Kreeft brings a philosopher's precision to this topic, which differs from Lewis's more popular, though no less effective, approach. Moreover, there are times when Kreeft's prose is crafted so well, it can make the reader want to stand up and cheer - which can be awkward in public places. I have purchased multiple copies of this book to replace ones I've given to others. This is the book for the broken-hearted contemplative who seeks to make meaning out of his or her sorrow and better understand God's role in their pain. I am grateful to Dr. Kreeft for the comfort he has delivered through this compassionate and intellectually honest book. I recommend it unreservedly.

The best teachers don't point to themselves.

Published by Thriftbooks.com User , 23 years ago
Kreeft's best asset is that he has read the right books. His task in this tome is to tackle the giant question that looms over our modern era: Why do we suffer? If you are willing to wait for an answer, you'll probably believe it. A reader might grow impatient because Kreeft does what modern philosophers are reluctant to do--or don't believe they can do--which is to state absolutes. We are never totally happy, for example. Who is patient enough to really consider that anymore? It is our right as an American! But Kreeft will lure you away with a colloquial style and wise exhortation. He brings with him the wisdom of many ages: Socrates, to Jesus, to C.S. Lewis. Kreeft is best at exposing the fallacious thinking that guides our popular mindset. Once that thinking is cracked, Kreeft fills those flaws with the universe's strongest glue: the love of God. This is a compelling work, one that can be read during a moment of grief, and should certainly be read after. This book would have received a 10, but I admit (and Kreeft probably would too) that C.S. Lewis' efforts in this area are better.
Copyright © 2020 Thriftbooks.com Terms of Use | Privacy Policy | Do Not Sell My Personal Information | Accessibility Statement
ThriftBooks® and the ThriftBooks® logo are registered trademarks of Thrift Books Global, LLC