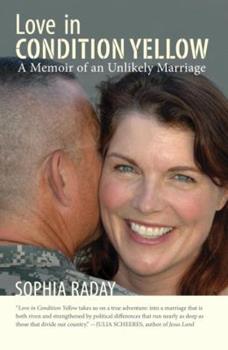 Love in Condition Yellow: A Memoir of an Unlikely Marriage

Go on a date with a soldier turned police officer? Me? And discuss Gandhi's experiments with truth with a gun-toting Republican? The last thing Berkeley-dwelling peace activist Sophia Raday expected was to fall in love with a straightlaced Oakland police officer. As someone who had run away from cops dressed in riot gear at protests, Sophia was ambivalent, to say the least, at the prospect of dating Barrett, who was not only a cop but also a West...

Anatomy of a complex relationship

Published by Thriftbooks.com User , 12 years ago
The cover of this book says it all: a pair of combat boots next to a pair of sandals. Sophia Raday, feminist activists, meets and ultimately marries Barrett McAllister, who's all elements of the right wing combined into one terrific guy: West Point grad, Ranger, infantry Army officer, and Oakland police officer. Somehow Sophia connects with Barrett and most of the book is about how they make their differences work. Sophia enters a foreign culture while living at Fort Carlisle while Barrett attends Army War College. He's honored to be invited while her friends gasp, "War College? What's the point?" Meanwhile Barrett feels alien in Berkeley, where he won't stop at a grocery store in his uniform on the way home from work. The first part of the book was a little exasperating as Raday reviewed her breakup with Nathan. As she introduces, her strong writing keeps the book from degenerating into a cliche. After all, stories of opposites are hardly new; for instance, we've had many memoirs and even sitcoms of city women who moved to a farm and interfaith marriages. Sophia and Barrett maintain their belief systems yet come together as a family. It's more like a couple who come from different religions and maintain separate belief systems. In fact, Sophia uses her belief systems, such as her Buddhist readings and her Nia dance class, to deal with the differences. I was a little surprised that Sophia doesn't encounter even one soulmate from Barrett's world. Of course, most of the time she remains in Berkeley with her old friends. At Carlisle, she describes a homophobic Colonel and wives who are warm and friendly but solidly Republican and pro-war. By way of contrast, I would recommend Elizabeth Samet's book, A Soldier's Heart. Samet describes some very sensitive soldiers, includingt a few who carried poetry into the war. I also liked Standing By, by a woman who married a Naval officer. Books like these give a more diverse view of the military. Less directly, Saday raises the question of what gets sacrificed in a marriage and how each partner honors the other's goals. Barrett willingly entered marriage counseling and participated enthusiastically. Sophia supported his decision to go to Army War College and accept a high-status police job, even though she wanted him to spend more time at home. She didn't seem like the whiny, self-centered type. Barrett in turn encourages her to pursue her writing dream. Most readers will be glad she did.

Published by Thriftbooks.com User , 13 years ago
This is a beautifully-written, engaging, honest look at what happened when Raday, a Stanford-educated Berkeley resident and peace activist, found herself falling in love with someone from a far different social and political world: a Republican police officer in the Army reserve. Their story speaks to anyone who is trying to understand the "other side", anyone who is trying to build a bridge of communication toward those with different viewpoints. I've read this book several times now and each time I find myself pausing on a different passage which has made me laugh or cry. It's a wonderfully timely love story, and a thought-provoking book to share.

A Great Pick for a Book Group!

Published by Thriftbooks.com User , 13 years ago
I loved this book! I practically inhaled it -- I read it in under 48 hours and passed it on to two other friends who did the same. The very premise is so provocative that it begs for further discussion after reading. It's led to a number of great conversations about what it means to be "patriotic" and "political" and how our (often self-righteous) preconceived notions of the "other" can blind us to the commonalities we often share. This would be a great pick for a book group!

Published by Thriftbooks.com User , 13 years ago
Love weaves an unlikely path in this beautifully written story. A truly honest exposure of the heart and a naked view of the complexity of marriage and relationships. It made me look at my own weaknesses and preconceived ideals and see a tapestry that I was not expecting. I could not put this book down and am anxiously waiting for another book by Raday. Bravo.

Published by Thriftbooks.com User , 13 years ago
Sophia Raday didn't intend to fall in love with her husband. She went on a blind date with him on a lark, figuring that a hippie like her and a Republican cop like him would be like oil and water. One date turned into another, then another, and... love! Raday is an entertaining writer, and her book reveals how even squishy liberals can be hardheaded while tough conservatives can be softer than you think.
Trustpilot
Copyright © 2022 Thriftbooks.com Terms of Use | Privacy Policy | Do Not Sell My Personal Information | Accessibility Statement
ThriftBooks® and the ThriftBooks® logo are registered trademarks of Thrift Books Global, LLC