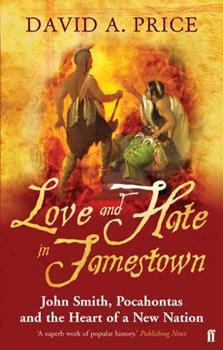 Love and Hate in Jamestown: John Smith, Pocahontas, and the Start of a New Nation

by David A. Price

A New York Times Notable Book and a San Jose Mercury News Top 20 Nonfiction Book of 2003 In 1606, approximately 105 British colonists sailed to America, seeking gold and a trade route to the Pacific.... This description may be from another edition of this product.

an excellent account of the first chapter of American history

Published by Thriftbooks.com User , 15 years ago
This is easily the most absorbing history book I have ever read. Price is a very good writer; furthermore his narrative is thoroughly researched, detached and unbiased, and optimistic. Between the English and the natives Price doesn't take sides or pass judgement, which I find gratifying as I tend strongly to resist any interpretation of history, even in times of violence and atrocity, that sees it even somewhat in terms of black and white, the good guys against the bad. It just doesn't work that way. If there are any bad guys for Price, they are only the inept early leaders at Jamestown, whose deadly incompetence John Smith was only sometimes able to neutralize. Far more than only the story of John Smith and Pocahontas, this history covers the narrow survival of the early colony at Jamestown, the subtleties of the diplomacy and military stand-offs with the native tribes, the broader scope of diplomatic relations between the European powers of the day, the travels of several of the Powhatans to London, the arrival of the first African slaves to Virginia, the natives' too-late (and ultimately self-destructive) effort to force the colonists out through the massacre of 1622, and the early emergence of a distinctly American character in the colonists by their second or third decade in the New World. Don't pass this one by! Almost two centuries of lesser-known, but disticntly American history took place before the Revolutionary War. Right from the start, as personified in the extraordinary John Smith, the settlers had a unique outlook and lifestyle that constituted the beginnings of American character and culture. Price communicates all of it with a novelists' skill.

Published by Thriftbooks.com User , 15 years ago
Author David Price, "Love and Hate in Jamestown" is an excellent telling of America's first successful European colony and the nearly mythic characters of John Smith and Pocahontas who were so instrumental in achieving that success. Indeed this is popular history as it should be. An entertaining read that illuminates an epoch and sets some misunderstandings straight. It turns out that John Smith, done hard by popular culture in recent years, was in fact a hero of British aims to settle in North America, providing the type of acumen and leadership that so many who came over were unable or unwilling to provide. Price is masterful in fleshing out the iconic Englishmen as he is with the evidently beautiful and precocious native who came to be known as Pocahontoas. She is a far more complex figure than many of us have been led to believe and her story neither lends itself to portrayals of her as a pawn to the English or as a Smith's nubile young lover. Indeed Price claims that they the two had great affection for one another but not romantic love. Price successfully goes to great lengths to give the two their due in the ultimate success of the english settlement. "Love and Hate in Jamestown" portrays neither the settlers nor the Powhatans as particularly heroic. In Price's hands they are not symbols to advance political interpretations merely people from vastly different cultures who collided at this particular time and place. Both sides are curious and suspicious, sometimes cruel, oft times duplicitous. We of course now how the story turned out for both groups but this book helps us understand why and how. In the wake of Terrance Malick's film "The New World" interest in Jamestown and its two most famous figures will doubtless grow. Prices's book will be an excellent place for the curious to get a fuller and more accurate story and enjoy a good read in the bargain.

Captain Smith and Pocahontas had a very mad affair

Published by Thriftbooks.com User , 16 years ago
With apologies to Peggy Lee and Walt Disney, they didn't -- but the story of the Indian princess saving Captain John Smith's life is true. In fact, she saved his life on several occasions. But, in the end, believing Smith to be dead, she married another Virginia colonist, John Rolfe, who was not a bad sort although a bit of a prig. This is the story of the British colony in Virginia from its founding in 1607 until its near destruction by the Indians and reconstruction in the 1620s. Captain John Smith was only in Virginia for the first few years of the colony, but he saved it from disaster over and over again. Surrounded by idle aristocrats who wanted to search for gold rather than grow corn, Smith adopted the no-nonsense policy that those who didn't work didn't eat. Many of the numerous "gentlemen" in the company preferred death to work -- and realized their desires. I was surprised at how humane and idealistic were the aims of the parent company of Jamestown back in Britain. The company advocated peaceful coexistence with the Indians and there was much criticism of Smith's more aggressive -- and practical -- strategy. In retrospect, it is amazing that Jamestown survived as it was reduced to near nothingness on several occasions by starvation, disease, and Indian attacks. One of the chapters tells of the arrival of the first Negro slaves in the colony -- an ominous portent for the future. For me the most interesting chapter of the book was about Pocahontas in England and her single meeting after a long separation with John Smith. I was especially amused at the author's speculation that Pocahontas was appalled at the unhealthy and squalid living conditions of the British in London at that time. She died soon afterward, a shame because her memoirs would be even more fascinating than those of Smith. "Love and Hate" is a well-researched and well-written book about a couple whose names will forever be linked in folklore and history. Smallchief

A Readable Book of Interest to All

Published by Thriftbooks.com User , 17 years ago
Love and Hate in Jamestown is an appropriate title for this fascinating book. Details of the love between John Rolfe and Pocahontas that developed into marriage, a trip to England, and her untimely death are provided. We are also provided with details of the uneasy relationship between the native Americans and the English settlers as they each tried to put up a front of friendship with the other. If the book has a hero, it would be John Smith who dealt with the environment in Jamestown, Virginia, as it was, not as the settlers wanted it to be. Many of the settlers were "gentlemen" who knew nothing about getting their hands dirty in work. Looking for gold was first and foremost in their minds. Among the settlers were workers and shirkers. Initially, food was provided for all from a common storehouse, but this method didn't encourage everyone to do their share of work. Jealously and envy were enemies of the settlers as to who they wanted as a leader. Not only was there hate towards the common enemy, the native Americans, but towards each other as well. Author David Price believes the story of Smith being saved by Pocahontas to be authentic. History is about people who lived in a different period under different circumstances. This is the story of America's beginnings told in a most effective manner.

Published by Thriftbooks.com User , 18 years ago
The literature of Jamestown exemplifies a history of frustrating complexity. This is partly because the history of Jamestown has become the playing field of propagandists (e.g. post Revolutionary Americans justifying the Revolution, as Tisdale says, by putting down the "gentlemen" of the colony) to Henry Adams, one of the otherwise great minds of America-perhaps its greatest-who admittedly set out to demolish the history of the South in the Civil War era, as Price himself points out. Romanticists have enjoyed a field day inventing a relationship that never existed between a mature John Smith and the child Pocahontas, and Smith himself is so unlikable a hero as to make an unpleasant historical subject. Add the fact that most of the productive research on Jamestown in our century has been archaeological or documentary, and add the fact that during the period concerned Jamestown officials come and go and return again, one is presented with a kaleidascope of confusion. Only with the recent publication of JAMESTOWN NARRATIVES, which arranges the sources in an order comprehensible to the gentle reader and Ivor Noel Hume's outstanding THE VIRGINIA ADVENTURE, has the picture begun to come together for any but the specialists. Bearing in mind that Hume, one of the world's top archaeologists, covers both the Roanoke settlement and Jamestown, this is the first modern book I have seen that embodies the latest research, deals only with Jamestown and does so in a way that is both accurate and readable. This is an excellent starting place for anyone who wants to understand the early colony. I do have one very small problem with the volume. The gentlmen still come off badly. Contentious, prickly, arrogant and self interested, they undoubtedly were, but their contribution to the colony was considerable, as the adventurers who explored and fought. But this (which I must admit is my own take) is more than overcome by Price's masterful account of how John Smith, one man of rather minor status, brought order out of chaos. It is hard to like Smith, but without him, I think there would have been no Virginia. And it is very easy to like Price, who has done us the inestimable favor of,at last, bringing the threads of the tapestry together.
Copyright © 2022 Thriftbooks.com Terms of Use | Privacy Policy | Do Not Sell My Personal Information | Accessibility Statement
ThriftBooks® and the ThriftBooks® logo are registered trademarks of Thrift Books Global, LLC