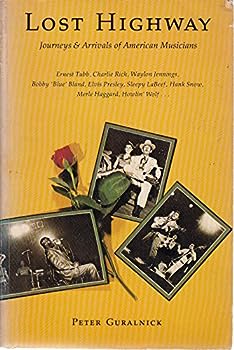 This description may be from another edition of this product. This masterful exploration of American roots music--country, rockabilly, and the blues--spotlights the artists who created a distinctly American sound, including Ernest Tubb, Bobby "Blue" Bland, Elvis...

Published by Thriftbooks.com User , 15 years ago
In his writing, Peter Guralnick has placed his own work in the mythology of American (roots) music. The portraits that make up this book are all written more than 10 years after the heyday of the people he is writing about. It's about people who are no longer the stars they were, though their legacy remains. It's not a history book about roots music, for that you need to read others. It does give great portraits of the people involved, showing their feebles but still maintaining their mythological role in music.

Published by Thriftbooks.com User , 17 years ago
From the Grand Ole Opry aristocracy to the smoky dives of Chicago, Peter Guralnick is our guide through this 1979 examination of what diverse streams have fed American popular music. In parts a celebration, in parts a eulogy, it makes for some fascinating reading. Those who read and liked Guralnick's earlier, shorter "Feel Like Going Home" will enjoy this second trip to the well. There's calls paid on Rufus Thomas, "the world's oldest teenager" whose blues-centered dances led to some early-'60s chart success; on DeFord Bailey, a harmonica whiz who was the Opry's first major star until folks figured out he was black; Hank Williams Jr., who lives up to his Daddy's tall legacy with the help of artificial stimulants and his own sense of the blues; and Charlie Rich, who was last visited in "Feel Like Going Home" as something of a straggler but grew into one of the biggest country singers of the 1970s, not that we find him here feeling too happy about it. The best writing in this collection comprises several chapters on Elvis Presley, who was still just barely alive when Guralnick wrote his first essay here in 1976 and just dead when he wrote his next right after. Elvis was the one guy Guralnick didn't talk to, but you feel his presence in interviews with his old guitarist Scotty Moore and former mentor Sam Phillips. "He hit like a Pan-American flash, and the reverberations still linger from the shock of his arrival," Guralnick writes. There's a lot of characters, and some seem more interesting for their uniqueness (Jack Clement, Charlie Feathers) while others seem like misses altogether (who was James Talley anyway, and why should we care?) But there's some arresting profiles of those who made it and those who didn't, plus a sense of what got them there. "It has to be the only thing for you - the one thing in your life," says cowboy legend Ernest Tubb. Guralnick makes it all seem worth it, for a few hundred pages at least.

This aint no MTV

Published by Thriftbooks.com User , 21 years ago
In Lost Highway, Peter Guralnick shows us some of the most unique, and largely unrecognized, figures in American music. His chapters on Charlie Feathers, who was there with Elvis, Carl, and Johnny in Sun Studios in the 50's, and Sleepy LaBeef, whose relentless touring machine, upon request, would serve up any hit ever recorded by anybody, are compassionate portraits of real people that never got the hits, the recognition, or the payday of their famous contemporaries. What you come away with after reading this book is a realization that Guralnick's subjects live and breathe 'the life'. It's what they do. As I read this book, I found myself wondering if Guralnick had selected his subjects to cover some broad spectrum of the American musical landscape, or if he just wanted to get face to face with his musical heroes, and writing a book about them was a cool way to make that happen. Whatever the reason, Guralnick's enthusiasm for American music and his abiding respect for its practitioners come through every page. His attention to the small things, whether flattering to his subjects or not, brings us in close, where frustrations, hopes, missed opportunities, and dreams are all there for us to see. This isn't MTV. It's not the Grammy's. It's blue collar, working stiff people, making their living playing the music they love. And because they are so much like us, their stories are wonderfully compelling.

An achingly beautiful book about life as a musician.

Published by Thriftbooks.com User , 22 years ago
Peter Guralnick makes you realize how much it takes to be a musician. His portraits of the lives of country, blues, and rock musicians are so beautiful and yet so tragic. You finish the chapter on Bobby Bland filled with admiration for his conviction, yet saddened that what defines him as a human being can become such a grind. And you finish the chapters on artists you didn't know or care about--Ernest Tubb, Hank Snow, Charlie Rich--filled with admiration, realizing that they loved and commited themselves to something that was as dear to them as it was to their fans, even when, as with Charlie Rich, it fell beneath their expectations. An almost indescribably beautiful book.
Copyright © 2020 Thriftbooks.com Terms of Use | Privacy Policy | Do Not Sell My Personal Information | Accessibility Statement
ThriftBooks® and the ThriftBooks® logo are registered trademarks of Thrift Books Global, LLC