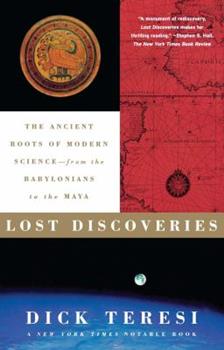 Lost Discoveries: The Ancient Roots of Modern Science--From the Babylonians to the Maya

Boldly challenging conventional wisdom, acclaimed science writer and Omni magazine cofounder Dick Teresi traces the origins of contemporary science back to their ancient roots in an eye-opening account and landmark work. This innovative history proves once and for all that the roots of modern science were established centuries, and in some instances millennia, before the births of Copernicus, Galileo, and Newton. In this enlightening, entertaining,...

Published by Thriftbooks.com User , 17 years ago
I love ancient history, mathematics and technology. This is abook where all three meet. If you liked "Ancient Inventions" by Peter James, Nick Thorpe, you will love this book. There is obviously a large range of work that Teresi has covered in thisbook. Teresi calls to attention our biases and reminds us that in different parts of the ancient world, different approaches and methodologies were followed in science. A smug judgement of this work with the prism of today's methodologies of science would lead to some of the extreme reactions posted in other reviews. To unconditionally disregard the evidence of science from the ancient world smacks of ethno-centric arrogance. Teresi is no James Burke (the very readable, but Eurocentric "Connections" author, SciAm), but he does a very decent job at *speculation* of how ancient discoveries and/or philosophies may have influenced later Western works. Teresi's book is a valuable compendium that adds to the knowledge of ancient sciences. I borrowed this book from the public library for this review. I have since placed an order for my personal copy. Strongly recommended!

Will be interesting to the lay person, will spark discussion

Published by Thriftbooks.com User , 18 years ago
Lost Discoveries is a fascinating read, especially for the non-scientist like myself. The author does a good job of explaining broad scientific theories and area of study and then tries to show how non-Western, non-European peoples explored and made advances in many areas of science that most of us are taught had their beginnings in renaissance Europe. For example the advanced math of Babylonia, India and Egypt that dealt with concepts that Greek math did not. Teresi makes a good case that a lot of this ancient science pre dates modern Western "discoveries," although at times the "science" that the ancients did seems only vaguely related to modern concepts of the same science. A better book might have spent more time on what how and why European authors stole (or borrowed) from non-Western sources. Teresi makes reference to anti-Islamic prejudice in renaissance Europe but does not explore that. I guess in a popular science book there is not room for the same rigorous defense in a more academic book. I just wish it was more clearly linked. At times I assume that the ancient discoveries were really lost and that Western scientists just stumbled on the same answers 1000 years later. Teresi does not do a good job convincing me otherwise except in a few cases mentioned in the beginning of the book.This is an excellent book for undergraduates, the non-scientist or as a launching pad for class discussion about how History is written. It is very informative, but needs to be read with an eye towards some skepticism.

Published by Thriftbooks.com User , 18 years ago
The first prerequisite for doing good science is objectivity. Since unconscious prejudices are its worst enemy, any book that makes us aware of ours does science a terrific service. Dick Teresi's Lost Discoveries shakes our old complacencies to the root. You'll be taken or a ride, in style and with wonderful verve, through mathematics, physics, chemistry and much more, and come away with long-hidden gems. At the same time, you'll come to know something of your guide's lively character - a glimpse of his father here, his son there, now and then of the humorous, thoughtful, inquisitive man himself. Not to be missed.

Published by Thriftbooks.com User , 18 years ago
This is the book that I have been looking for and didn't know existed. If you are looking for an unbiased review of the contributions to science,math and the study of our universe, this book is for you. Contrary to what we were taught in school, there is and was a great body of knowledge out there which wasn't born in the "western civilization". This wonderful book makes this point very clearly with facts supported by a mountain of research. I was especially pleased to see that the contributions made by the Maya and other Mesoamerican Peoples were not overlooked.If your worldview will not be too threatened by learning that everything worth knowing didn't result from the Greek Civilization or Europe, then jumpin with both feet. I promise that you won't be disappointed. Sincerly Donald H. Byrom

Published by Thriftbooks.com User , 18 years ago
You know you're not in for a dry recitation of facts when the chapter on mathematics begins with the author and his fourth-grader son and his son's friends waiting in line at Taco Bell. The boys start guffawing at the menu. There were three sizes of drinks, and three prices: $1.19, $1.49, and $1.79. "The kids were laughing," Teresi writes, "at the sign beneath the prices: UNLIMITED REFILLS!" This sign, as Teresi explains, is an example of the concept known as "infinite sets." (An infinite number of small drinks is equivalent to an infinite number of large drinks, so there's no reason to pay the higher price of large drinks.) Infinite sets were understood by Indian scientists in the sixth century BC but apparently haven't made it to Taco Bell. From there, he goes on to explain the real -- and surprisingly entertaining -- origins of mathematics, astronomy, cosmology, physics, and other sciences. Gleefully mocking both the pretensions of chauvinistic Western scientists and the half-baked multi-cultis who believe that the Egyptians invented airplanes and used telekinesis, this book is a romp and celebration of human genius, which can be found in all cultures and time periods.
Copyright © 2020 Thriftbooks.com Terms of Use | Privacy Policy | Do Not Sell My Personal Information | Accessibility Statement
ThriftBooks® and the ThriftBooks® logo are registered trademarks of Thrift Books Global, LLC