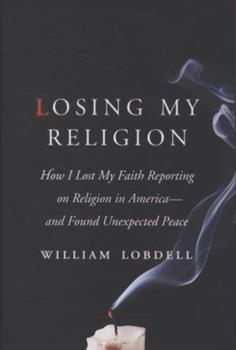 Losing My Religion: How I Lost My Faith Reporting on Religion in America and Found Unexpected Peace

William Lobdell's journey of faith--and doubt--may be the most compelling spiritual memoir of our time. Lobdell became a born-again Christian in his late 20s when personal problems--including a failed marriage--drove him to his knees in prayer. As a newly minted evangelical, Lobdell--a veteran journalist--noticed that religion wasn't covered well in the mainstream media, and he prayed for the Lord to put him on the religion beat at a major newspaper...

Published by Gabriel L Delatorre , 1 year ago
An amazing book about a mans spiritual journey.. I loved this book a lot..

Published by Thriftbooks.com User , 5 years ago
Very WELL written and VERY HEART felt! William (Bill) you did some excellent work for Los Angeles Times Religious Section and wished they would have let you publish ALL your articles in a Book. I'm waiting for more awesome Books by you and exposures. Thank you! P.S. It goes to show readers cover-up, sham, scam, perversion of so many with no accountability. Amazing how people will attend, give money (tithe) and NOT research a matter and worse, defend a lie and be more loyal to a Priest, Pastor with no consequences in regards to many abuses in Christendom as God, Jesus, Holy Spirit do NOT get any money let alone people in general. Buy more books and pass them out to your family/friends.

Published by Thriftbooks.com User , 13 years ago
To be honest, I was expecting this to be a much more cynical book, a tirade against the evils of religion and the delusions of religious people. Instead what I found was one person's deeply honest revelation of his own vulnerability in questioning, and then leaving behind, his faith. William Lobdell was immersed in religion in all aspects of his life for many years, to include in his professional life. It took the Catholic abuse scandals in the first half of this decade to shake, and then dissolve, his faith. In the duration of this process, he asked a lot of difficult questions, ones that perhaps many Americans have asked, but have been afraid to admit even crossed their minds. While I don't expect that everyone who reads this book will become a hardcore atheist, I do think that there will be some people who, like me, read this and find ways to question why we believe what we believe, to create at least a more self-examined spiritual path. Thank you, Mr. Lobdell, for being brave enough to put this piece of yourself out there.

Published by Thriftbooks.com User , 13 years ago
This is an excellent book--seamless, concise writing with a page-turner quality that is usually reserved for mystery and suspense novels. From the beginning, we know that Mr. Lobdell has lost his religious faith but first we learn how he became a believer and then read in suspense as he reveals his personal awe-inspiring journey to "atheism" or something like it. The objective reader will enjoy the journey no matter what faith or lack thereof that they bring to the table. Every word feels honest and completely authentic. For those of us who believe in God, there is nothing offensive about Lobdell's heartfelt account. He acquits himself beautifully even if you wish he might reconsider and at least come to believe in "the God that Thomas Jefferson and Albert Einstein believed in--a deity that can be seen in the miracles of nature, the complexity of DNA or the wonder of physics."

Published by Thriftbooks.com User , 13 years ago
I enjoyed this book immensely. William Lobdell is an award-winning journalist for the Los Angeles Times, and formerly covered the "religion beat" for that paper. In this book he tells his personal story of moving, over a 20-year period, from becoming a "born again" Christian at age 28, through gradual disillusionment, and ultimately to complete unbelief. In doing so, he draws heavily upon interviews and research he conducted during that time as a journalist reporting on religion-related stories. These stories revealed aspects of religion as actually practiced in America, uncovering behind-the-scenes activities that are less-than-flattering, to put it charitably. Lobdell begins his book writing "By age 27, I had screwed up my life." If not as poetically expressed as the opening of Dante's Inferno, he has still set the stage for a personal odyssey through Christian faith, slowly increasing doubt, and ultimate abandonment of those beliefs. At this personal low point at the beginning, he met an old friend who told him that what he needed was God. Lobdell promised to go to church. He had been exposed to Christianity and church as a child, but had been turned off by the vengeful nature of the Old Testament God, and he abandoned religion as a teenager. Now, perhaps out of desperation to salvage his life, he found a home at a southern California megachurch, where the message was much more positive and life-affirming. Still, it took him a year to really begin to feel at home there and get into the spirit of the worship services, the music in particular. At about this time, some good things began to happen to him, such as becoming the editor-in-chief of a local newspaper, and improved health. The tipping point for Lobdell came at a spiritual retreat he went to at the urging of a friend, where in a moment of emotion he accepted Jesus Christ as his personal Lord and savior. Things really began to take off in his personal and professional life after that. The most remarkable event was receiving a $45,000 check from a former boss, whose conversion to Christianity made him realize he had probably cheated Lobdell out of a fair share of his magazine company when he sold it. What made it seem amazing was that Lobdell had prayed to receive that amount of money, and now God had apparently answered his prayer! The real break, which he also attributed to God's intervention, was a job as religion writer that was created for him at the Orange County Edition of the Los Angeles Times. He interviewed many people of faith and documented how their lives had been transformed by the miracle of God's love. Some of the selflessness of his subjects rubbed off on him. He began tithing. He was inspired by those whose faith in God was not diminished by personal tragedy. His personal fortunes increased again when he became the full-time religion writer for the Los Angeles Times. In November 2000, Lobdell first learned of a lawsuit against a Catholic priest, Fr. Michael Harris,

A Memoir of Losing Faith on the Religion Beat

Published by Thriftbooks.com User , 13 years ago
Losing My Religion is William Lobdell's memoir of becoming an evangelical, then a Roman Catholic, then a reluctant atheist. It is an engrossing and quick read. And unlike Richard Dawkins, Sam Harris, and Christopher Hitchens, Lobdell is not vicious. He disagrees with believers, but he does not despise them. Lobdell is an award-winning journalist who covered the religion beat for the Los Angeles Times. As a one-time resident of Costa Mesa, California--where Lobdell lives--and a former reader of the Times, I personally know some of the people Lobdell reported on, and I remember reading some of his stories. His reportage on the sins of Paul and Jan Crouch and their Trinity Broadcasting Network sticks in my mind even to this day. The book begins with Lobdell's life in a mess. A friend tells him he needs God, and he ends up going to Mariners Church, an evangelical megachurch pastored by Kenton Beeshore. As he matures in his faith, he switches to St. Andrews Presbyterian, pastored by John Huffman. Eventually, however, he finds himself drawn to Catholicism, and he and his wife enroll in catechism classes. At about the same time, he begins to cover a clergy sexual abuse scandal in the Orange Diocese, involving Father Michael Harris, the longtime principal of Mater Dei High School. In 1996, a one-time student at Mater Dei named Ryan DiMaria sued Harris and the Diocese and won a judgment of $5.2 million dollars. DiMaria also successfully forced the Diocese to reform the way it handled clergy sexual abuse cases. Lobdell was disheartened at the way the episcopal hierarchy covered for abusive priests and vilified their victims, using strong-arm legal tactics to silence them. Even more, he was utterly shocked by how pliant congregations rallied to the side of their abusive priests rather than to the side of the children those priests had molested. As he began reporting on clergy sexual abuse in other dioceses, Lobdell saw the same pattern of cover-up, vilification, and strong-arm legal tactics play out over and over again. This pattern delivered a "spiritual body blow" to Lobdell's faith, which never recovered. (And despite completing catechism, Lobdell decided not to join the Catholic church after all.) Losing My Religion is memoir, not apologetic. Lobdell narrates his story of "de-conversion" rather than offering airtight arguments for disbelief. Nevertheless, the corruption of the Catholic church, not to mention the sinfulness of television evangelists, is the main reason he offers for his loss of faith. If the Christian God exists and does what the Bible says he does, surely Christians should be better than they are. He raises additional objections based on the problem of evil, the ineffectiveness of intercessory prayer, and the hard-to-believe stories of the Bible. As the pastor of an evangelical church who is trained in both philosophy and theology, I find Lobdell's arguments less than convincing. They are the standard objections to Christianity fo
Trustpilot
Copyright © 2022 Thriftbooks.com Terms of Use | Privacy Policy | Do Not Sell or Share My Personal Information | Accessibility Statement
ThriftBooks® and the ThriftBooks® logo are registered trademarks of Thrift Books Global, LLC