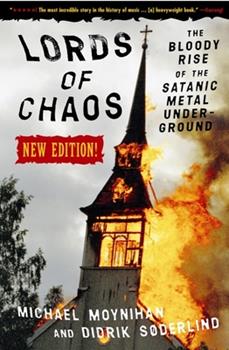 Lords of Chaos: The Bloody Rise of the Satanic Metal Underground New Edition

by Michael Moynihan and Didrik Soderlind

Just before the turn of the millennium nearly 100 churches had been torched and desecrated by adherents of Black Metal, the most extreme form of underground music on the planet. In an escalating unholy war, Black Metal bands and their obsessive fans have left a grim legacy of suicide, murder and terrorism spreading from Norway to Germany, Russia, America and beyond. Written by two journalists, this is a unique look at this hellish scene featuring...

Everything you wanted to know about Black Metal

Published by Thriftbooks.com User , 15 years ago
This book is a must have for fans of the Norway scene, or anyone else interested in a shockingly good story. You don't have to know anything about the music to enjoy Mr. Moynihan's well written documentation of this brutal scene, as well as the musical styles that influenced this genre. You won't be sorry you bought this one.

Published by Thriftbooks.com User , 15 years ago
I've been a fan of black metal for three years now, and although I've never really been into the "evil" satanic underground that the black metal bands used to get into, I still loved reading this book. It's one of the few books that I've kept on reading simply for the enjoyment of reading it rather than pushing myself to get through it. I feel that these authors gave a fair view of the black metal philosophy. They seem to present their point of views as the black metalers themselves see things, so that it has the appearance of a supportive bias but rather it's bringing to light an unpopular view of how to live and act. I think this was a brilliant and mature example, as I would have thrown this book away if it started telling me how wrong everyone was. The only problem I have with this book is the new edition has devoted 16 pages to Varg Vikernes' theories on aliens and their connection to hitler clones...although I can see how this relates to the mind of someone so extreme in deviance, I felt that it was highly irrelevant to the book due to the fact that Varg was long incarcerated when he came up with these theories and they had no real placement in the theme of the book, the "Satanic Underground." It seemed like a side story that I personally didn't care to read at all. Other than that, this book was truly a pleasure to read. I've got my own church burning equipment ready to go! (I'm kidding.)

Impressive and much-needed overview of blackmetal

Published by Thriftbooks.com User , 22 years ago
I have to say that this is one of the best books I've read in 1998. Being an avid listener of black metal, naturally I was interested in the subject, but after reading this book, I have to say that no background concerning this type of music is necessary for you to enjoy this book. Anyone who enjoys true crime books as well as works of sociology will be fascinated by LORDS OF CHAOS because it contains so much material related to these areas; specifically it deals with a leader of blackmetal's murder and the ensuing trial, along with the reasons he was murdered by the individual on trial. Also, it gives a great overview of the roots of blackmetal and the type of people involved in the scene. It also strives to answer the question of why people are attracted to this type of extreme music, and does a fairly good job of answering that question along with posing a few more questions in the long run?(relating to the possibility of 'ancient forces' having an impact of the rise of blackmetal) All in all, you can't go wrong here. I do wish that more coverage was given to more bands that deserve attention, but that certainly does not detract from the book's overall impact. Highly reccomended!!!

An essential book for those interested/into black metal.

Published by Thriftbooks.com User , 23 years ago
This is the first book to come out that addresses the underground realm of the Satanic black metal movement in Europe. Being familiar with a lot of the riots, church burnings, murders committed, etc... I was brought up close to this world and learned alot from reading all the interesting interviews and richly detailed text throughout the book. Authors Moynihan and Soderlind peel the layers of this sweltering scene and reveal the truths, terrors and realities of the undercurrents of this music scene that is still one of the most popular in the extreme music genre. This study takes the reader on a journey that will send shivers to the darkest part of your soul. Many bands of this scene are featured even ones imprisoned, most notably--the notorious Varg Vikernes of Burzum, and an in-depth interview with The Church Of Satan's own Anton Szandor LaVey, among others. A spectacular book.

A thorough and articulate history of Satanic Metal.

Published by Thriftbooks.com User , 23 years ago
Lords of Chaos traces Satanic Metal from its dark roots in jazz and blues, through it's rather comical incarnations with bands such as KISS and Black Sabbath, on to the bloody and deadly serious Black Metal of Norway. The book is very well thought-out, and does not merely report on the bands, but the real people involved in them; their thoughts, their frustrations, their goals and their dreams. Lords of Chaos also deals briefly with the elements of facism and Odinism in the black metal "scene," and some of the effects of Satanic music in America. I highly recommend Lords of Chaos to metal fans, Satanists, Odinists, janitors, housewives, and security guards, (just to name a few.) It's enlightening, entertaining, and moves deftly from the ghastly to the esoteric and back; kids, you just won't get this on Jerry Springer! (Or, maybe you will, on the show, "My Daughter Sold Her Soul To Burzum.") Well worth the money; buy two, and give one to a friend!
Copyright © 2020 Thriftbooks.com Terms of Use | Privacy Policy | Do Not Sell My Personal Information | Accessibility Statement
ThriftBooks® and the ThriftBooks® logo are registered trademarks of Thrift Books Global, LLC