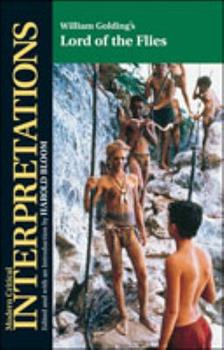 TheLiterature Made Easy Series is more than just plot summaries. Each book describes a classic novel and drama by explaining themes, elaborating on characters, and discussing each author's unique literary style, use of language, and point of view. Extensive illustrations and imaginative, enlightening use of graphics help to make each book in this series livelier, easier, and more fun to use than ordinary literature plot summaries. An unusual feature,...

A manual for societal behavior and expectations

Published by Thriftbooks.com User , 12 years ago
"Lord of the Flies" is singularly the most important novel for required reading, whether assigned in school or self-imposed. It regularly appears as number one on my own list of best books. Let's play "What if." What if a plane carrying a full load of school boys crashes on a deserted island with no adult survivors? What would happen to those boys? What would you expect to happen? William Golding works with this premise: an idyllic setting, innocent schoolboys. One boy, an older boy just short of teenage years, a boy with fair hair, assumes leadership to stir the others into some semblance of organization and survival mode, much like adults would do if adults were present. He also saw a need to defuse the web of fear of the younger ones. Where are we? How long will we need to wait before someone comes for us? All questions with no answers at this time. Ah, yes, Golding tells us, everything goes well for a while. But remember the "scar" made by the crashing plane? Something ugly is on this island (but it's not the scar). It's in the bushes, in the dark, in the depths, in the depths of hearts, and it grows like the malignancy it is. A blatant revelation of what is about to come occurs when Roger silently and stealthily watches a young'un, unbeknownst to the little child. All the young'un is doing is running a stick through the sand, disturbing a crab in a tiny pool of water. Even he imposes control and fear on a helpless creature as Roger boldly picks up a couple of rocks and tosses them the youngster's way. He deliberately misses but comes closer with each throw. Next time he will probably hit the young boy, but not yet. This taboo--deliberately and unnecessarily causing pain to one smaller than you--has not been broken--yet. Although the dance of the spears, the primeval chants, the attack and killing of the pig, then feasting on its flesh, their kill, are shocking acts of savagery, this event is foreshadowed by the seemingly innocent lob of the stones. From a casual incident, but one with eventual intentionality, the ritualistic slaughter is not so far-fetched or surprising. Golding prepares his readers. This is how the chaos of society starts. It begins with one simple disconnect from the rules. It begins in the minds and hearts. Will I do what society expects? Will I follow the rules to keep things running and working? Do I break a rule or two for my own enhancement. Will I feel a power surge if my rock hits that young `un? Ralph would probably speak of the terror of knowing that rules WILL be broken. He would speak of the utter horror that any rule can be and will be broken and he won't live to tell about it. Just ask Piggy. This novel is the only one I taught over and over during the twelve years I worked with high school seniors. My other choices I would switch around those years, drop some, add some. This one I kept. It is that important. I think of "Lord of the Flies" as a necessary manual for societal behavior and an effort to kee

Published by Thriftbooks.com User , 15 years ago
It is always with a sense of foreboding that I pick up a book that I loved when I was much younger and read it after several years have passed, my fear being that the book will no longer hold up after the passage of time. Lord of the Flies was a book that I read at least three times a year when I was growing up, starting at about age 12. I eagerly devoured it, grappling with all of its symbolism, and even writing poems about some of the main characters. Fortunately I was never required to read it for school or I likely would not have enjoyed it as much. I was pleased to read it again and find that Golding's novel of World War II era prep school boys surviving on an island after an airplane crash that kills all the adults is just as good as I remember it being. I could go on and on about the various symbolism in the book, and the descent of the boys into savagery, but I don't want to over analyze it. It is a terrific book, with well thought out characters. One cannot help but feel sympathy for Ralph as he tries to keep a semblance of order. Anyone who has ever been terrorized by a school bully will sympathize with Ralph's struggle against Jack; and Piggy is a truly pathetic character. My favorite character has always been Simon, who is just a little off kilter but in the midst of his ramblings speaks a great deal of truth. Kids, don't wait until your teacher makes you read this book. go out and get it and read it for yourself. Unlike most of the books you'll be required to read for school, this one has action, adventure, and enough gore to make it a good read. Later on you can worry about the symbolism and the deeper meanings within the book, but for now, just read it for fun.

Published by Thriftbooks.com User , 17 years ago
If not for anything else, William Golding's LORD OF THE FLIES (1954) is remarkable for having come out at a time when Western society was being bombarded with visions of totalitarian nightmares. The Nazis were gone, but still in modern memory. Russia's totalitarian state was a constant threat. McCarthyism hovered over everyone's privacy, as did J. Edgar Hoover. And recent fiction, like Aldous Huxley's BRAVE NEW WORLD and, especially, George Orwell's 1984 presented world views where the human spirit is all but squelched by governments and technologies.LORD OF THE FLIES, in its own way, says, "Hold on a second! Humans do need to be regulated. And they do need to protect themselves from each other." His tale is a warning: Humanity, without government, will degenerate into savagery and anarchy. And that is precisely what happens in this book. You know the plot, by now. But what has to be mentioned is that William Golding is a visionary who has the story-telling mastery to convey and do justice to that vision. LORD OF THE FLIES is a remarkable and powerful book, one that should be on everyone's bookshelf.

More than just a book

Published by Thriftbooks.com User , 20 years ago
William Golding wrote this book as a response to "Coral Island," in which a group of boys shipwrecked on an island make Christians out of cannibals, hunt pigs but do not spill blood, and are cheerfully rescued. Obviously, Lord of the Flies is much more than an adventure story about good little boys. It is an exploration into the darker side of man and the true source of the ?beast,? or Devil. Meet Ralph, who represents sanity, common sense, and the ?conscience? of man; Jack, who loves nothing more than hunting, blood, and power, and who Freudians might say embodies the Id; Piggy, who personifies intelligence, logic, and reason; and Simon, who discovers the true nature of the beast and represents a ray of hope for mankind. I love this book because contained in less than 200 pages is an insight into human nature and the failings of society. When you read this, be prepared not only to examine the book and all its symbolism but yourself and your civilization.

Human Nature through the eyes of William Golding

Published by Thriftbooks.com User , 20 years ago
With this his first novel, author William Golding wrote a novel that he could never surpass in greatness. Lord of the Flies is a novel about our human nature. Too often I think, people jump to quick conclusions about the book and Golding's stand on human nature. "His stance is too pessimistic" or "That books really gross." What these people fail to realize is that Golding tried to paint a picture of human nature as he saw it. He wasn't making things up, I don't think he was particularly angry, he wrote Lord of the Flies to expose people to the atrocities that he witnessed in World War II. One of the largest underlying principles in Lord of the Flies is of course, human nature. William Golding gives the reader three interesting characters to analyze: Jack, Piggy, and Ralph. It's quite apparent as you read the novel that Golding must have read a little Sigmund Freud before writing Lord of the Flies. Let's start with Jack. Jack is the definite Id on the island. He wants to survive but he also wants to eat meat and have fun. Jack is clearly unable to control these urges and in turn has a pretty large influence on the other boys on the island. Piggy is the definite Superego on the island. Piggy is always referring to "well my auntie..." and always finds an excuse not to do something. Piggy has no intentions of satisfying his id, and in turn influences only Ralph and Simon. Ralph on the other hand, takes the middle road. He is clearly trying to find a way to satisfy his id, but he can't seem to find one. Take what he said in chapter eight for instance: "...Without the fire we can't be rescued. I'd like to put on war-paint and be a savage. But we must keep the fire burning..." Ralph is definitely trying to satisfy his id, but those laws of culture still remain with him, telling him it's not the thing a proper English boy should do. Another interesting connection I made while reading, was one between Jack's status of leader and the ideology of Thomas Hobbes. Unlike Hobbes though, Jack's power was used for quite the opposite affect. Hobbes believed that in order for a perfect society to exist, a higher power had to be in charge, in order to keep the other citizens in check. Jack was that higher power on the island. He was in control of everything, however, his power had quite the opposite affect of "keeping people in check." Jack used the powerful persuasion of the id to persuade others. Jack could promise meat and fun, whereas Ralph could promise labor and fruit, something the other boys definitely didn't want. Lord of the Flies is also a novel filled with symbolism. Probably the most important of these symbols was the conch. The conchs represented several things, including freedom and order on the island, and possibly, even for a short time, unity between the boys. One of the most interesting aspects to the conch was the fact that Piggy couldn't use it. This shows a lack of leadership or strength on Piggy's part. The conch became a tool of free speech.
Copyright © 2020 Thriftbooks.com Terms of Use | Privacy Policy | Do Not Sell My Personal Information | Accessibility Statement
ThriftBooks® and the ThriftBooks® logo are registered trademarks of Thrift Books Global, LLC