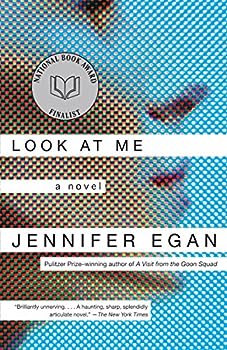 Look at Me: A Novel

This description may be from another edition of this product. A National Book Award Finalist In this ambitiously multilayered novel from the acclaimed and award-winning writer Jennifer Egan, a fashion model named Charlotte Swenson emerges from a car accident in...

Published by Thriftbooks.com User , 14 years ago
Jennifer Egan's Look at Me, a National Book Award finalist, is a richly detailed novel which eerily describes cultural events that have come true in the six years since its original publication. The book tells interwoven stories of a high fashion model whose face is shattered and reconstructed following a car accident, a high school girl caught up in a secret affair distancing herself from her peers, and an embattled private eye fighting alcoholism and obsessed with a case involving the fashion model. The most mysterious character is a foreign man consumed by anger for all things American. He moves through society working on his accent and mannerisms, changing his name from town to town, plotting to destroy the American conspiracy. Egan's novel not only discusses Middle Eastern sleeper cells in a pre-9/11/2001 world, it also predicts the absolute explosion of reality television and marketing, and the phenomenon of social networking on the Internet via tell-all personal spaces. (She wrote the novel over a six-year period and published in mid-2001). The recurring theme is that of identity, and of the secret or shadow selves that we all hide. Egan's characters struggle to present the right face to the world (in some cases hiring manipulative publicists and marketers) while battling inner demons. The lives of her richly detailed characters gradually converge in a breathtaking climax that changes each one irrevocably.

A Well Done and Ambitious Novel

Published by Thriftbooks.com User , 19 years ago
Jennifer Egan's terrific new novel, Look at Me, appears almost deceptively simple at first. Beautiful NY model loses face in car crash and struggles to regain her life. It's a interesting premise, but Egan certainly doesn't stop there. She explores the superficiality of our contemporary culture and its bizarre obsessions with a well done, insightful narrative. Charlotte, the model with the new face is not a supermodel, but a fairly successful, very smart, mid-30s woman who has seen it all, and thus sees much of what she sees for what it is. Charlotte's descriptions of what she sees in New York are sometimes scarily on target. The details of Charlotte's car accident are somewhat unclear, and to let us know what happened, Egan brings in another Charlotte--this one a teenager (and the daughter of model-Charlotte's high school best friend) seeking answers through her studies with her slightly mentally unstable professor uncle and her affair with a mysterious new high school math teacher. We follow the lives of both Charlottes for the months following the accident. Model Charlotte returns to New York and tries to develop a new life because her old one has essentially vanished with her old face. She becomes involved with a new internet venture--a sort of webcam meets Big Brother meets Real Life meets People magazine (the concept itself is a brilliant, thought-provoking idea on Egan's part). Teenage Charlotte is living in model Charlotte's old home town in the Midwest simply dealing with the difficulties of teenage life--and her involvement with these two older men.Look At Me is a terrific novel, it's only flaw being that sometimes it gets a little too ambitious. It seems at times Egan is trying to communicate a message, but hasn't come up with a concrete way of communicating it. This, however, does not distract from the wonderful and thought provoking story this novel tells. Enjoy.

Beauty is in the eye of the beholder!

Published by Thriftbooks.com User , 19 years ago
I didn't know what to expect when I picked up this novel. I found the book jacket description to be interesting, and so I decided to give it a whirl. I am so glad I picked it up! Jennifer Egan is an amazing writer whose language is perfect and lyrical.An Illinois-based woman who made the big-time as a New York supermodel, Charlotte's world shatters when an accident disfigures her famous face. Having had reconstructive surgery, people in her past -- one person in particular -- comes along to take her on a trip to the past, a past she's tried to leave behind as much as possible. She is forced to see just how her appearance has taken her over life and overall identity -- especially when sells a new identity of herself to the Internet. Egan skillfully illustrates the trappings of pop culture and the shallow world of modeling.With beautiful prose and eye for detail, Look at Me is a novel that illustrates the world's obsession with beauty -- or lack thereof. I recommend this novel most highly.

Published by Thriftbooks.com User , 20 years ago
I would hate to be Jennifer Egan at the start of writing her third novel, because her second novel, Look at Me, will be a tough act to follow. Beautifully written and crafted, with a fugue-like structure, Egan shows how individual lives collide with history in unpredictable ways. Her main character, Charlotte Swenson, is a model from the mid-west who has her face surgically reconstructed after a devastating car accident that takes place during a visit to her despised home town. Charlotte's desperate but cynical repositioning of herself within New York's fashion world draws an incisive portrait of the workings of celebrity culture. Charlotte decides to sell her identity to a new web site, in the course of her personal re-launch. Similarly, a mysteriously missing acquaintance of Charlotte's discard his old identity, and creates himself anew in Charlotte's home town. Egan skillfully links this fluidity of identity with values underlying the larger popular culture, and makes credible the kind of passionate ideological response to popular culture that leads to terrible acts of violence. Like I said, prescient.

Published by Thriftbooks.com User , 20 years ago
This novel far and away exceeded my expectations. I liked the idea of a novel about a person learning to live with a new face. I expected something quiet and thoughtful like Elizabeth Berg or Anne Tyler. "Look At Me" was a lot more than that, while still keeping the emotional appeal of those authors' books. At the beginning of the book, Charlotte, a model at the end of her career and going down, is in a horrible car accident. As she begins her recuperation, her path crosses with her former best friend's daughter, also named Charlotte. For most of the book, the two Charlottes' stories mirror each other. As one Charlotte learns to live her life over again, the younger Charlotte is discovering life and love for the first time. Both are dealing with issues related to their looks and esteem..."old" Charlotte has a new face that is slightly different than before, and young Charlotte must deal with her average looks and an unfair reputation as an easy girl. Each has a man in her life who is not what he seems. The mystery that ties them together is unexpected and really suspenseful. I was up until early in the morning reading "Look At Me", and was practically foaming at the mouth by the time I reached the climactic scene where everything was explained. Egan's prose is beautiful and literate, but without the denseness that made "The Invisible Circus" a slow-going read at the beginning. "Look At Me" zips along without abandoning intelligent thought and without taking the obvious turns so prevalent in mainstream fiction. Take a chance on this book...you'll love it!
Copyright © 2020 Thriftbooks.com Terms of Use | Privacy Policy | Do Not Sell My Personal Information | Accessibility Statement
ThriftBooks® and the ThriftBooks® logo are registered trademarks of Thrift Books Global, LLC