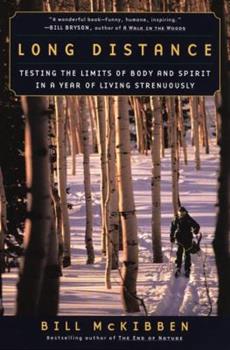 The bestselling author of The End of Nature presents a provocative, unconventional book, now in paperback. Approaching middle age and never much of an athlete, McKibben trains to be a world-class skier and learns some unexpected lessons about his body, and life.

Tear-jerker of a read

Published by Thriftbooks.com User , 16 years ago
I guess they say real men don't cry, but this book really tests you. It's written from the first-person perspective about a guy's yearlong effort to get in shape through cross-country skiing, and also to enjoy his relationship with his father during the latter's long bout with terminal cancer. Because I enjoy all kinds of outdoor activity (I cycle toured around Australia not too long ago!), I was initially attracted to the book by the sports angle. From that perspective, the book was great. Having down-hill skied since the age of 5 I'm not overly versed about the world of cross-country skiing, but the author delves into different kinds of techniques, skis, waxes, and other equipment, as well as the underlying physiology in a detailed way that shed some light on the sport that I never got riding the lifts. Additionally, I definitely enjoyed gaining greater insight into the subculture (Did you know that the major event in the sport is called the "Birkebeiner"?) What I didn't expect at first was such an emotionally gripping book about family relations during serious illnesses. The author describes the gradual decline of his father's health, and the toll that takes on the whole family. There are some really nice passages where you recognize the moments that all of us enjoy with our families, but the not-so-fun moments are part of the reality portrayed, too. By the end, I was glad for having read this book, because it was a lot more than just a journal of a year spent skiing.

More than just on ode to skiing

Published by Thriftbooks.com User , 19 years ago
In turns, this account of his incredibly strenuous year is funny, heartbreaking, introspective and irreverent. I'm surprised how modest the author is about his ability to even perform some of the workouts -- a 3 hour and 55 minute run or ski! I'm an exercise fanatic myself, but I don't see any 4 hour workouts on my horizon. The chapters on the origin and development of cross country skiing are fascinating -- I used to hear about Koch and Caldwell when I taught at the Putney school. Our Olympic program hasn't really done much to produce skiiers since that time. You'll also gain a tremendous respect for the Norwegians, Swedes and Finns whose reverence for this grueling sport makes them the finest in the world. This book went well beyond just sports -- although his father's illness was introduced abruptly, it does serve as an anchor for much of hte second half of the book. His dignity to the end made it inspiring rather than depressing. My only small criticism is that since the book is so personal I would have liked to hear more from his wife and daughter's reactions to his training. He alludes to them, but it sounds like they lived on another planet for that year which I'm sure was not the case! Very rewarding and inspiring read, well written.

Published by Thriftbooks.com User , 20 years ago
I'm no winter warrior. Three times a week in the gym is my idea of a challenge. But you don't have to care about sports or conditioning to cherish this book.Simple reason: It's not really about skiing. It's a manual for life, an attempt to work out a philosophy that can be tested and applied. What makes it work: McKibben is Everyman. Or that's his skill as a writer: He knows what's happening in his head, and, not surprisingly, a lot of what he's thinking is is your head too (mine, anyway).I plan to give this book to any friend who's having trouble understanding that life is precious and effort matters.

A powerful book that goes beyond endurance training

Published by Thriftbooks.com User , 20 years ago
As a skiing enthusiast, I found that Bill McKibben's Long Distance revealed the world of physical and mental training that i never fully grasped existed. Even with all his training it was amazing to see that so much rested squarely on genetics, to see that after his many hours of training he could only become so much. The mental aspect was a plus to the book, as a past ski racer it was nice to see someone put into words how it feels out on the course: "Except that the minute a race is done, you start trying to make it all add up, turn the thousand things that happen even in a three hour ski race in to some kind of coherent storay with a morale at the end: 'I couldn't focus,' or 'I bonked,' or 'Everything came together.'" -Bill McKibben. To sum it all up, Mr. McKibben has written up an endurance trainer's dream and how he copes with the mental and physical pressures are fascinating to read. I would recommend this book to anyone that is remotely interested in cross-country skiing or how the elite athletes train.

A Superb Book that is both Thought-Provoking and Touching

Published by Thriftbooks.com User , 20 years ago
McKibben is one of those rare authors whose ideas touch both the heart and mind. There are really 2 subjects that McKibben writes about here--his experiment to train with the same intensity as an Olympic athlete, and the death of his father. Throughout this incredible book, McKibben questions his life, his motivation for conducting this fitness experiment, and his relationship with his father. There plenty of times when McKibben could have allowed this book to become a preachy, self-indulgent sermon on the emotional pain of watching his father die. Instead, McKibben keeps his story personal and in so doing, the lessons he learns become more meaningful. Just a warning though--this is a big time tear-jerker at places.
Copyright © 2020 Thriftbooks.com Terms of Use | Privacy Policy | Do Not Sell My Personal Information | Accessibility Statement
ThriftBooks® and the ThriftBooks® logo are registered trademarks of Thrift Books Global, LLC