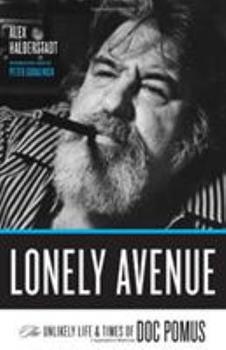 Lonely Avenue: The Unlikely Life and Times of Doc Pomus

One of the most original, influential, and commercially successful American songwriters, Jerome Felder, aka Doc Pomus (1925-1991), gave the world a dazzling legacy of musical hits during rock 'n' roll's first decade. A role model for generations of writers and performers, Doc was renowned for his mastery of virtually every popular style, from the gutbucket rhythm and blues of "Lonely Avenue" to the symphonic soul of "Save the Last Dance for Me" to...

Can't say enough about it...

Published by Thriftbooks.com User , 14 years ago
"Lonely Avenue" is one of the most moving books I've read in a long, long time. It's so good, I read it in one sitting. I couldn't put it down. This book will make you laugh, it will make you cry, and parts of it will make you want to jump out of your chair and cheer for its hero (and a new hero of mine), Doc Pomus, a true American orginal if there ever was one. Even if you don't know anything about him or his music, do yourself a favor and buy this book.

A great book for everyone

Published by Thriftbooks.com User , 14 years ago
This is a fantastic new book. Among its many strengths is the fact that this is a book that can be appreciated and enjoyed by anyone. While it is a biography of a great American song writer, it is also a multi-dimensional work that offers readers glimpses into the history of New York City and its various neighborhoods, the evolution of American culture, the personal struggles of all its characters and the music industry. The book is also very personal and very human and is an inspiring piece about extraordianry and ordinary people. Anyone can read this book; no one needs to have a background in music history or to even love Elvis! Halberstadt's book is very beautifully written. I was just as caught up with the writing as I was with the subject. I learned a great deal about America's famous musicians, but I also just loved the prose and the intimate details that the author included. Clearly, this book was exhautively researched and the author obviously labored lovingly over each sentence. I hope that Halberstadt will continue to publish books as I am eagerly looking forward to his next one. I highly recommend this book. It is perfect for summer reading, for serious inquiry into American history, for book clubs, for college classes.... You will not be disappointed, and you will probably go out and buy lots of new music after reading it!

Providing depth to the inner workings of the music industry.

Published by Thriftbooks.com User , 15 years ago
I met Doc Pomus in a treasured CD by Johnny Adams. Pomus' lyrics fascinate me. I have searched and found bits and pieces of his life. When I read a review of Lonely Avenue, I had to have it. I savored every word as I have a special place in my heart for musicians. I did not want to finish the book because I did not want him to die. I have loaned the book to friends who are musicians and loaned Johnny Adams' interpretation of his music also. Friends of my who are avid readers have been receiving this recommendation from me as "a person I would like to have known." Long Live Doc's Music!

The poet laureate of early rock/pop gets a worthy biography

Published by Thriftbooks.com User , 15 years ago
He was short and stubby. He'd had polio at 9; he couldn't walk without braces and crutches. To see this 16-year-old kid struggle to the stage of a Greenwich Village club in 1943 was to get a taste of what it was like to run into Toulouse Lautrec in a Paris cafe half a century earlier --- you knew this guy was....different. His dreams, for starters. Jerome Felder wanted to stand in a boxing ring and, though he couldn't move, win the championship. Or fire unhittable fastballs from the pitcher's mound. And the women --- they'd be lined up for him. In that club, though, Jerome connected with a dream that could come true. He got on stage and sang the only blues song he knew --- and people clapped. The next night, he was back, with a new confidence and a new name: Doc Pomus. He was on his way to becoming the greatest songwriter in the history of early rock `n roll. There are books you read because you're interested in the subject. And then there are books you read because you just happen to pick them up --- and the next thing you knew, your mouth was dry, your heart was racing and you were turning the pages like the secret of life lay just ahead. "Lonely Avenue" was like that for me: a freight train with no brakes, bound for glory and ruin. I have a soft spot for stories about people who make something out of nothing --- people who reach into their guts and share their deepest, rawest feelings in a form that makes us feel them too. The Doc Pomus story is the very best of that breed. A Brooklyn kid who didn't want to waste his life at a desk. A misfit who found his first home in black blues clubs. A survivor who realized he was never going to make it as a performer and started writing songs because behind-the-scenes was the closest a white, chunky cripple could come to touching an audience. He was in his 30s when he teamed up with an 18-year-old composer named Mort Shuman. And when, unaccountably, he persuaded a virginal blond actress to marry him. A few years later, he chanced upon their wedding invitation, and he remembered what it was like to sit on the sidelines while other men danced with his wife. He picked up a pen and watched the words flow: You can dance Every dance with the guy Who gives you the eye Let him hold you tight You can smile Every smile for the man who held your hand 'Neath the pale moonlight But don't forget who's taking you home And in whose arms you're gonna be So darlin', save the last dance for me... Before Ben E. King recorded that song, Ahmet Ertegun told him the back story. King's eyes misted. And, as you know, he and the Drifters delivered a record they'll be playing as long as there are lovers. Silly stuff followed. "Turn Me Loose" and other hits for Fabian, a teen idol "who had a reliable range of four or five notes." But also, more hits for Ben E. King and the Drifters: "This Magic Moment" and "I Count the Tears." For Dion & the Belmonts, "Teenager in Love."And, for Elvis, "Suspicion" and "Viva Las Veg

Lonely are the Brave

Published by Thriftbooks.com User , 15 years ago
He wrote many of the lyrics you've sung to yourself again and again, his catchy phrases sticking in your head like musical seaweed in the tide basin of memory. He was intimate with the likes of Duke Ellington, Rodney Dangerfield, and John Lennon. Phil Spector depended on him, yet drove him crazy with his manic behavior. And with Elvis, the king of rock and roll, the two of them forged a musical partnership that swelled in the years just after Elvis' return from Germany after serving in the US Army and meeting Priscilla. Who you might ask is this man? The one and only Doc Pomus who wrote SAVE THE LAST DANCE FOR ME, TURN ME LOOSE, and HUSHABYE, among many other top ten hits. Long dismissed as a Tin Pan Alley relic, he regained popularity with a new host of musical imitators in the 1970s and 1980s, and Alex Halberstadt's impressionistic, moody biography takes us through the fabulous highs (marriage to two beautiful blondes) and lows (polio and a weight gain some estimated as soaring to 350 pounds). He spent his life on crutches, and later in life Eunice Shriver recruited him for the Special Olympics. I expect LONELY AVENUE to be a natural for best sellerdom not only among pop music fans but for course adoption in disability studies as well, since for the first time Halberstadt tries to show us how Pomus' disability guided and provided some of his most well known compositions-- SAVE THE LAST DANCE, for example, gains poignancy when you realize it was written by the proverbial wallflower. As the author of a forthcoming biography of Veronica Lake, I was fascinated to hear of Doc's brief liaison with the former Paramount film goddess who had, ten years before, set th screen on fire with her incendiary performances in THE GLASS KEY, THIS MAN FOR HIRE, I MARRIED A WITCH, THE BLUE DAHLIA, SULLIVAN's TRAVELS and SO PROUDLY WE HAIL (to name merely a few of her many stellar performances). I had no idea that she had hooked up with the crippled fat man his friends called, "Doc." But I dispute Halberstadt's characterization of Lake and would ask him to reconsider for a second edition his nasty little hack job on a great star. For one thinbg, he claims that she was so far gone in drink by the time that Pomus met her that he had no idea she was, in fact, "Veronica Lake." Drinking and a "foul temper" had aged her and alienated her from her former perch as queen of the Paramount lot. I don't think so. Her face "bloated and lined," her hair "tangled." "She was sad and nearly always drunk." As Halberstadt tells the story, Pomus was at a low ebb in his career at the time, but when the hag finally told him that, although she was not yet 35 years old, she had once used to be "Veronica Lake," then Pomus got really upset, for her repulsive face was "a memento not only of her failure but of his, too." I don't know, Alex, maybe you're divine looking but Veronica Lake was still wonderfully good looking in 1955 (or whenever this incident is said to have happe
Trustpilot
Copyright © 2022 Thriftbooks.com Terms of Use | Privacy Policy | Do Not Sell My Personal Information | Accessibility Statement
ThriftBooks® and the ThriftBooks® logo are registered trademarks of Thrift Books Global, LLC