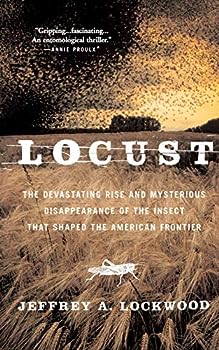 Locust: The Devastating Rise and Mysterious Disappearance of the Insect that Shaped the American Frontier

by Jeffrey A. Lockwood

Throughout the nineteenth century, swarms of locusts regularly swept across the continent, turning noon into dusk, demolishing farm communities, and bringing trains to a halt as the crushed bodies of... This description may be from another edition of this product.

Published by Thriftbooks.com User , 13 years ago
Thanks to Lockwood's convincing presentation of evidence, we can safely ignore the whacko theories that prayer led to divine intervention to rid the West of the locust plague. Lockwood's study does serve as yet another example of a long and growing list of human-caused extinctions in North America: ranging from passenger pigeons to Michigan Arctic grayling to American chestnut trees. Modern industrial society (including agriculture) has been pretty rough on this land that we "conquered" just a few hundred years ago. The question is: what are we willing to do to curb human society & technology, and to preserve our natural inheritance?

Terror in the Sky

Published by Thriftbooks.com User , 15 years ago
In the 19th century swarms of locusts regularly devastated the farms in the West. Some wondered if it was divine punishment or personal failures. The Federal Government established a commission to study the problem. A few decades later the Rocky Mountain locust disappeared like an extinct species. Jeffrey Lockwood decided to investigate this long-lost pest and try to solve this ecological mystery. The `Introduction' describes a plague of locusts in July 1875 Nebraska. One famous account is in Laura Ingalls Wilder' book "On the Banks of Plum Creek". Once the locusts laid their eggs a new plague would erupt the next year, and the year afterwards. Chapter 1 tells of the diseases of the 19th century: cholera, lice and typhus, parasitical worms. Famine and hunger were real threats. While poultry feasted on locusts, this left their flesh and eggs inedible. Turkey gorged themselves to death. The stench from dead locusts created a problem. Locusts cannibalized the wounded or dead. The people were terrorized by these events. Hot dry weather made locusts flourish (p.22). The low-level jet stream spread them for hundreds of miles (p.23). Chapter 4 tells of the methods used to destroy locusts. One of the simplest was a ditch; the little locusts fell in but couldn't get out (p.54). Dead locusts were used to fertilize root crops (p.55). Farmers diversified into corn, peas, and beans from just the vulnerable wheat. Livestock grazed the grasslands and denied these lands to locusts. Native birds consumed great numbers of locusts (p.58). The Rocky Mountain locust was a national threat because it caused economic havoc (Chapter 5). In those days Darwinian theory blamed the victims for their problems (pp.65-67)! Some states gave aid to the devastated counties (p.68). States offered a bounty for eggs and nymphs (p.72), and called upon Washington for federal disaster funds (p.75). The US Entomological Commission was funded to study the locust problem (p.91). Increasing mobility of people also spread insects, weeds, and pathogens. Chapter 7 tells of this Commission, who discovered the uniqueness of the Rocky Mountain locust. Their destruction was best done by destroying eggs (p.114). They also recommended the a diversified agriculture. After the locusts disappeared they were replaced with grasshoppers (p.130). They were as damaging as the dust storms of the 1930s. But the Rocky Mountain locust became extinct (p.137). Chapter 9 tells how Boris Uvarov described the changes in locusts as phases (pp.146-147). [Does this explain crime and violence in city life?] The spread of alfalfa was followed by the disappearance of locusts (p.160). Could a warming climate have ended the locusts (p.170)? Forested areas were a barrier to locusts (p.177). The disappearance of bison was followed by the disappearance of locusts (p.179). Chapter 11 tells of the Grasshopper Glacier north of Yellowstone National Park. Modern science could reveal unknown facts about locusts (p.184). Chapter 12

As engrossing as "The Da Vinci Code" but true

Published by Thriftbooks.com User , 16 years ago
Locust swarms of literally incredible size swept through the Midwest in the nineteenth century, when homesteaders were settling, and then, toward the end of the century, disappeared. The volume of a swarm is hard for us to comprehend; if the swarm were square it would have been 450 miles on a side and a quarter to a half a mile deep-about 3.5 trillion locusts, corresponding to 600 locusts to every human then living on the earth. The destruction created was commensurate. Technological ways of destroying the insects failed but resourceful farmers turned from wheat to crops that survived the infestation better and to cattle. (Lockwood notes in a footnote the dangerous present return to monoculture in the prairies.) The response of religious leaders was ambiguous-were these swarms God's punishment on a sinful people? Government response was equally ambiguous-were the distressed farmers lazy mendicants or victims of a disaster? One compelling argument for giving aid was the threat that the Midwest would be abandoned. Besides the aid finally delivered a second government response was the establishment of a commission to do research and find a solution to the locust problem-Lockwood identifies this as the first government effort to harness science to the common good. The commission did much good science and built a scientific infrastructure but the locust swarms ceased on their own. In 1904 a Montana entomologist reported not having collected one in five years. Grasshopper plagues did occur but they were not nearly as traumatic, partly because farmers and government agencies had learned from the locusts. Theories abounded about what had eliminated the locusts: widespread planting of alfalfa? the demise of the Bison? climate change? removal of Indians? It would not be fair to the reader to give the secret away. Part of the research leading to the explanation involved digging locust bodies out of glaciers in nearly inaccessible parts of Wyoming. Certainly one of the most engrossing books I have read in a long time. History, religion, biology, public policy come together in Locust; the most important lesson, though, has to do with the fragility of the environment.

Published by Thriftbooks.com User , 17 years ago
This is an interesting tale about the apparent extinction of the Rocky Mountain Locust, which so devastated the farms of the early settlers of the American West. Lockwood begins his tale with a rather exhausting recitation of the first hand accounts of the Locust swarms, and the impact they had on the pioneers. This was, we quickly learn, horrifying and almost unbelievable to modern ears. The helplessness and despair, starvation and economic ruin! Lockwood's account is to this reader, at least, could have been a little shorter--I got to the "enough awready" stage pretty soon. But it does set the stage for the question (which I had wondered about myself): what happened to them? Why haven't they recurred over the last century? Might they come back? Lockwood, as a young professional entomologist, was unhappy with previous explanations and decided to try to answer this question with as much certainty as he could, using real data and a little less speculation. He relates the historical hypotheses in some detail, showing the reader their inadequacies in a pretty convincing way. A nice approach is that he provides lots of biographical detail of the earlier entomologists who were concerned with the mystery, which livens up the tale too. By the time he got to his own explanation, I was ready for it, and was pretty well convinced to boot. I especially appreciated the way he consistently tried to get quantitative about various aspects of the problem. He doesn't just say that the swarms were awful big, but calculates that the biomass at times was as large as all the buffalo in the West. There are numbers here. I like that. I was interested to read about his expeditions to find remnants of the swarms on glaciers, his trials with getting funding and published, and the passion he has for his subject. I was a little amused by the sympathy he develops for the locust, which sometimes even veers toward a mystical reverence for them, and a regret for their passing. Not many pioneers felt that way, I think. The twist at the very end of the book was quite startling to me. I wonder, will anyone follow up on it? The book is a little long-winded to some, perhaps, but I appreciated the thoroughness with which he approached the work, and found it to be quite fascinating, and thought his work to be something of a triumph. I was satisfied.

Published by Thriftbooks.com User , 17 years ago
It is, according to entomologist Jeffrey A. Lockwood, "perhaps the greatest ecological mystery of modern times." Lockwood has studied the mystery for years, undergone grueling mountain expeditions to get evidence, compiled a solution to it, and had his solution accepted by his peers; it might be, therefore, that he has a slightly exalted sense of just how great the mystery is. But in _Locust: The Devastating Rise and Mysterious Disappearance of the Insect that Shaped the American Frontier_ (Basic Books), he has set the matter clearly for non-specialists, and has shown how he made his convincing answer to "What killed off the locusts?" You may never have wondered about this particular ecological question, but Lockwood's detailed, multi-faceted, and fascinating book provides a refreshing look at entomological and agricultural history, at how field and research science is done, and how evolution works in mysterious ways. The impression the locusts made on pioneers in the nineteenth century cannot be overstated. They darkened the sky and ate any crops down to stubble, fed on clothes, and gnawed even the handles of farm implements. There was nothing that could be done. Of course there were religious appeals to remove the plague, and inchoate government plans to help the starving farmers. Eventually the federal government did set up programs to investigate the swarms scientifically, and huge amounts of data were collected, but it did not do a great deal of good in the short term. The farmers wanted to get rid of the locusts then and there. There were many methods of locust control, including a horse-drawn flamethrower. Finally, but through none of these efforts, the locusts vanished forever. Entomologists have thought about this for more than a century, and some interesting hypotheses have been forwarded, each reviewed here, each eventually unsatisfactory.Lockwood's solution was from evidence gathered, among other places, high in Wyoming ridges, in the glaciers. There are very few locusts pinned in collections, but after much grueling effort he and his team found them encased in glacial ice. Before finding full bodies, they were able to do some identification by looking at the remains of mouth parts, which are distinct in grasshopper and locust species. For exact identification, though, bodies with intact penises had to be found. The penises of grasshoppers and locusts display many grooves, hooks, and curlicues that ensure that the key of the male fits only into the lock borne by a female of the same species, so a penis is the best way to know exactly what species one is dealing with. Lockwood's solution, which is too interesting to be revealed in detail here, involves some fascinating aspects of the locusts, which were in one form in their home nesting ground but developed a different body type for the migratory (swarming) phase when the home got crowded. Lockwood also drew upon the lessons we are learning from the Monarch butterfly,
Trustpilot
Copyright © 2022 Thriftbooks.com Terms of Use | Privacy Policy | Do Not Sell My Personal Information | Accessibility Statement
ThriftBooks® and the ThriftBooks® logo are registered trademarks of Thrift Books Global, LLC