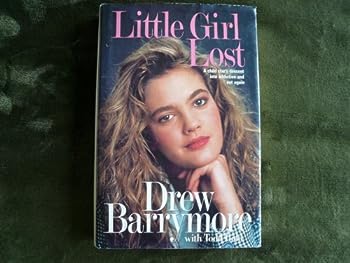 We receive 27 copies every 6 months.

She was a modern-day Shirley Temple, but at the age of nine Drew Barrymore was drinking alcohol. At ten she took up marijuana, and by twelve she began snorting cocaine. Here is her gripping, heart-wrenching story--a story of a childhood gone awry and a young woman battling to restore order to her chaotic life.

Drew Barrymore is an inspiration. Period.

Published by Thriftbooks.com User , 17 years ago
Literally one of the greatest books I've ever read. No, I'm not saying that because I'm a Drew Barrymore fan. I mean, if acting isn't what she wanted to do, she could've been an author! Written when she was still in rehab circa late 1988 and published in 1990, this book gives all of us an insight into her early years, and the hell she went through at such a young age. She tells us about her first taste of alcohol, cigarettes, cocaine, and marijuana. She also tells us about her first kiss, and her first makeout session, and how she was always fighting with her mother. She tells us about living at the rehab. She tells us about her visits with her father as well. She shares all of her stories and adventures, her mishaps and her first achievements. With this book, I've learned how truly strong this woman is, and how no matter what she went through, she didn't ever back down at achieving what she wanted. Drew Barrymore is a true idol for anyone, and this book proves that.

A must Read Book

Published by Thriftbooks.com User , 19 years ago
There have been many books that I have read dealing with Drug additctions and family problems, but "Little Girl Lost" was by far the best book that I have read about this subject. Drew Berrymoore does a wonderful job showing the reader the life experiences that she encountered as a young girl and teenager. As a little girl in the spot light from the beginning due to a main roll in the movie E.T. Drew began her life knowing that she wanted to always act. Her mother being a single parent was not always there for Drew when she needed her the most and her father was never in her life. Drew started smoking cigarettes at the age of nine, drinking heavily and smoking pot by the age of twelve and then became addicted to coke soon after. Drew's book does not only give in full detail the experiences that she went through with her addictions but she really shows the reader exactly how hard it was to go through her life alone and what that did to her as a person. Soon after Drews addictions became out of controll,her mother admitted her into a hospital where she would begin her treatment. The way that Drew shared her experiences in the hospital made me feel like I was actually going through this at the same moment she talked about it. She showed the reader how powerful addictions are and how they really do take over your life. Also by writing about her experience she helped give hope to other people who can relate to having addictions, family problems, and then going through the process of recovery, the hardest step imaginable. Not only does she break down the steps of recovery but she also shows the reader that family problems are very complicated to deal with. Many people feel that just because some one is famous they live a life that is glorious. She was not affraid to come out and share her life changing story after her recovery and I feel that from her many people can learn a lot about family problems, addictions, and the way to help yourself and get through treatment.

Drew Barrymore Recounts Her Life ... and How She Survived

Published by Thriftbooks.com User , 20 years ago
Now Drew Barrymore is known as a star by younger generation through the hit movies like "The Wedding Singer" and "Charlie's Angels," but she was once remembered as wide-eyed, screaming little girl Gertie of "ET." But later on, she got involved in alcohol- and drug- related problems. After her rehabilitation in hospital she decided to confess what she felt during the nightmare. In 1990, then, "Little Girl Lost" was published. Some thought, and even now may think, that the book is trying to exploit her scandal, but that is not simply true. The book records minutely her wild days after her sudden fame, but Drew does not lose her level-headed attitudes on her past, and honestly tells what happened in her life.The book's contents cover the events from her birth to her day of recovery at fourteen, and naturally considerable part is devoted to her days of decline into drinking and drug. Drew doesn't conceal the truth about her personality, difficult relationship with her mother, many adventures resulting from her behavior, and hard days in the hospital. Her first-hand knowledge is, however, what many teenagers would feel in their own life, and probably many teens and adults alike can relate to the honest Drew; that is the best past of the book, and Drew's harrowing personal experience must not be dismissed as a simple, usual, celebrity's gossip you will forget next day. And thanks to her wise decision, the book includes many pages recording her good days in Hollywood. The most memorable is her memoir during the shooting of "ET" and her friendship with the director Steven Spielberg. Her recollection is full of happy episodes, which are as touching as the film itself, and it is easy to understand that the movie means a lot to them. She also remembers her funny tall tales she made before Spielberg at the audition for "ET," and nervous feelings at her appearance on TV "Saturday Night Live" as a host. Other co-workers too appear in her book (one of them is Stephen King), and it is interesting to read those pages. "Little Girl Lost" consists two narratives: Drew's own voice written (or probably recorded) in the first-person narrative, and contributor Todd Golds's third-person commentary explaining the background of her life, which includes comments by people around her including Jaid, Drew's mother. Both tell her life one after the other, so the book succeeds in not giving one-sided view on things around her. The book is written well-balanced, and also gives a brief and comprehensive history of famous Barrymore family (of course, you knew she belongs to the legendary Barrymores? If not, it's time.)There are so many thing I want to talk, but about the rest, you buy the book and read it. The book is readable, and her very realistic account of her wild days, I confess, is gripping and absorbing. Some people say it is sad, and they are right. But she made it; she survived; and after knowing how she did it, you come to like her all the more.

Exactly what I was looking for...

Published by Thriftbooks.com User , 22 years ago
Being an 8th grader we are faced with many projects. One of them was "read a biography and do a presentation on it." I was worried but I hiked it over to the mall looking specifically for a book on Annette Funicello. No luck but as I was scanning the shelves I found "Little Girl Lost" and snatched it up. I was frustrated and it was the first thing I saw. But as I was walking through the mall reading it I couldn't put it down. And I didn't until I got home. The way they lay out her life and speak the total truth was amazing to me. I didn't know half of the stuff that I read in that book. Then I was faced with preparing the project. I was doing a collage and for a shape I chose 12 steps. It brought up a lot of questions in the class which I gladly explained. I am glad I read such an excellent book and walked away from it with a sense of actually knowing something about the wonderful actress I loved in the first place.

Published by Thriftbooks.com User , 22 years ago
This book is absolutely amazing. Drew Barrymore takes readers through a very difficult time in her life. She describes her addictions with such force and honesty that you can't help but feel what she's going through. Throughout the book you feel her emotions as you read them, so that while she learns from her mistakes, you learn from them as well. I really appreciate that she never made excuses for her behavior at all throughout the book, she just showed what she did and how she learned from it. Drew shows such strength throughout the book and such wisdom, that at times it's hard to think that she was only about thirteen or fourteen while she was writting it. She makes a great contribution to society in writting this book, because she shows you the non-glamorous side of drugs, which makes you realize how horrible they actually are. This is a great book that I highly recommend.
Trustpilot
Copyright © 2022 Thriftbooks.com Terms of Use | Privacy Policy | Do Not Sell or Share My Personal Information | Accessibility Statement
ThriftBooks® and the ThriftBooks® logo are registered trademarks of Thrift Books Global, LLC