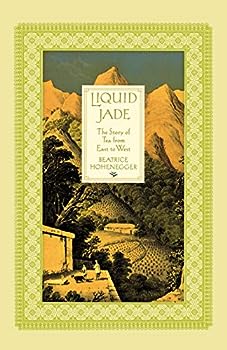 Liquid Jade: The Story of Tea from East to West

Traveling from East to West over thousands of years, tea has played a variety of roles on the world scene - in medicine, politics, the arts, culture, and religion. Behind this most serene of... This description may be from another edition of this product.

Published by Thriftbooks.com User , 14 years ago
I spent 23 years on tea plantations since 1974. I started my tea trading business in 1998 after leaving plantations. Then I started my tea books library after seeing a very large volume of tea literature in China, which I started visiting regularly since 2004. This book is the best one I have seen which narrates the world transition of tea scene in the most lucid way.

A Fascinating History of the World's Most Popular Beverage

Published by Thriftbooks.com User , 14 years ago
I once went to a basic lecture about tea, which inspired an interest beyond merely drinking the beverage. Before I read this book, however, I had no idea how rich of a history was involved. It concerned more than tranquil tea ceremonies in Japan or fancy tea parties for British aristocracy. There was also a darker side including drug trade, espionage, revolution (such as our own Boston tea party), violence, and exploitation of laborers. It is a fascinating mix of socio-political developments -- some glorious, some shameful. And in the process, I was also learning some interesting facts about world history. Fear not, this book does not neglect practical matters such as how much caffeine is in tea, what kind of water to use, or should one put milk in first or tea in first. Hohenegger tells it all in a style which will amaze you, make you laugh, and sometimes sadden you. You'll never look at tea in quite the same way again after reading this book.

Published by Thriftbooks.com User , 15 years ago
The book was so engaging that i would look forward to come home from work and begin reading. It was interesting to learn that such a readily available drink could have affected dramatically the history of different countries. The author shed light on subjects that most of us are not aware of, such as how different cultures prepare their tea, and tea labor issues. The book contained so much information that i have begun to read it again.

Scholarly And Delightful To Read

Published by Thriftbooks.com User , 15 years ago
This study of tea is a fine example of why so many people love history. Beatrice Hohenegger has taken something people use every day but rarely give more than a passing thought to and traced its history back thousands of years, encountering many strange byways and interconnections which link it to a much larger story. This, not the stereotypical long dry lists of battles and kings some unfortunates associate with the subject, is what makes history fascinating. Liquid Jade is divided into four segments. In the first Hohenegger studies the origins of tea drinking in East Asia, describing the many legends of how tea first became the indispensable drink of the aristocracy and then the general population. I laughed at the stories of tea being picked by specially trained monkeys and by young girls deprived of spicy foods lest they contaminate the plants' aroma, and I was intrigued to read of tea's connections to the development of Buddhism (particularly Zen), Confucianism, and Daoism. The second segment is devoted to tea's arrival in the West. Here we see the Europeans being introduced to and falling in love with tea, with a few unhappy missteps (A Portuguese woman boiled some tea leaves, threw away the water, and served the leaves to her unfortunate guests!) Once again Hohenegger does a fine job linking tea to the larger historic picture, identifying connections to the development of imperialism and colonization, and to the crazes for porcelain and opium. In the third part Hohenegger providews a miscellany of details and trivia about tea, including the invention of tea-bags and iced tea, the ongoing controversy between those who advocate MIF or TIF, and the class differences between High and Low tea. I enjoyed this part best just because of the variety and scope of the information. Finally, in the fourth part Hohenegger examines tea and tea production today, describing the impact of terrorism in some tea growing areas, the role of environmentalism, and continuing concerns for the plight of tea workers. Hohenegger writes with great detail and a light touch of humor now and then. Her scholarship is impeccable and made approachable by her fine writing style and dry wit. I hope we see more from her in the future.

Liquid Jade: The Story of Tea from East to West

Published by Thriftbooks.com User , 15 years ago
Beatrice Hohenegger has written history of the tea trade between Asia and the West that is well researched and scholarly, but reads, at times, like an adventure novel complete with a Scottish spy. She goes to the roots of what we now call globalization, and exposes it's truly dark practices, as the East India Company establishes the first global corporate business model. What she is able to do, quite effectively, is move the history, that most of people view in a detached, it happen long time ago way, and place in squarely in our 21st century tea cabinets. She reminds us that before there was oil dominating geopolitical dynamics, there was tea and opium. Still, tea is the second most consumed beverage in the world next to water and be with use long after the oil drys up. It is clear to see that she has discovered the sense of wonder and adventure that has entranced tea devotees for thousands of years, inspired great philosophers and poets, motivated great crimes and wars, and helped to shape the scope history of the world for the last five hundred years. She does a good job of passing that on to the reader. She passes on the roots of tragedy, fueled by hubris and greed, that brought down the last Chinese Dynasty, and created the sundown for the British Empire, all for a cup of tea. She also offers some solutions that point us to a future of global sustainability, in the case of tea, fair trade, organics, quality, and business integrity. It would seem that in her discovery of tea, she has also come to care for and be an advocate for the poor country people that have suffered and continue to suffer from the tea trades bitter cruelty. She does so with a writing skill that keeps you turning pages, without becoming heavy handed or preachy . It is surprising that most people of have such limited understanding of the historical significance of tea, but that will surely change after reading Liquid Jade. I have often been frustrated by the lack of good tea literature about tea in English, but we can hope that Beatrice Hohenegger's hard work will raise the standards for future books on tea and tea culture. Reading her book may start that tea adventure for you, or if you already on that road add to your experience. Austin Hodge President Seven Cups Tea [...]
Trustpilot
Copyright © 2022 Thriftbooks.com Terms of Use | Privacy Policy | Do Not Sell My Personal Information | Accessibility Statement
ThriftBooks® and the ThriftBooks® logo are registered trademarks of Thrift Books Global, LLC