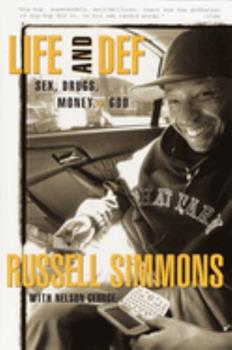 Russell Simmons, the original and eternal hip-hop mogul, is one of the most innovative and influential figures in modern American business and culture. When no one outside of inner-city New York had even heard of hip-hop, Simmons saw the seeds of a global force that would change the way people talk, dress, listen to music, and choose the heroes they hang on their walls. Today, he oversees a sprawling, multimillion-dollar empire of culture-defining...

A look at the soft side of Russell Simmons

Published by Thriftbooks.com User , 15 years ago
Like you, I always thought Russell Simmons was a bigger than life, take no prisoners kind of personality. Who knew that Russell is as sensitive as Oscar Wilde and as munificient as Greg Louganis? Oh sure, he acts all tough in interviews, but this book peels away the layers and shows that Russell's heart beats just like yours and mine -- maybe more -- definitely better. For example, did you know that Mr. Simmons was voted "Top Alto" in his high school glee club? Did you also know he was the ghost writer of "Wind Beneath My Wings"? What about the notion that Russell Simmons will never tip less than 14% -- even if the service is bad? And what really suprised me, is that he curiously names REO Speedwagon as the band he admires the most. I salute you Mr. Simmons and hope that this is just the first of his many, many super intelligent and unbelievably insightful self-serving books.

Published by Thriftbooks.com User , 17 years ago
Simply put: "Life and Def" does the best job of illustrating (with real life examples) how to survive and thrive in the music industry. This is the most important book for urban entrepreneurs to own.Buy it today!

Published by Thriftbooks.com User , 17 years ago
This book should attract anyone, because of the many fields Russell has been in. I read this book in three sitting and I NEVER read books, and afterwards I felt as if a could accomplish anything.

Wisdom has been passed on!!!!

Published by Thriftbooks.com User , 17 years ago
As you may have read some may say that they expected more. You have to read deeper into the book. I believe this is a great book, it shy's away from the glamour and focuses on the reality. Many may think that the industry and the super star lifestyle is a lucky life but it is a hard life, one that you choose the dedicate your life to. Russell gives you insight on the situations and how to handle them. Wisdom has been passed on and only of you have the same drive will you understand the message.

Published by Thriftbooks.com User , 19 years ago
russell simmons is the man who set the blueprint for the hip-hop game and he breaks down how to do it for anyone who wants to know how to turn a hot culture into a long-term industry. he explains how he started def jam, his philosophy about finding and promoting artists, how he launched phat farm, how he launched def comedy jam, how he produced movies like the "nutty professor." russell didn't get anything easy--he had to fight against the gatekeepers who didn't understand hip-hop, but in the process he created the blueprint for how to take a powerful, but marginal, culture global. if you're someone interested in business or hip-hop, this is the book for you.
Copyright © 2020 Thriftbooks.com Terms of Use | Privacy Policy | Do Not Sell My Personal Information | Accessibility Statement
ThriftBooks® and the ThriftBooks® logo are registered trademarks of Thrift Books Global, LLC