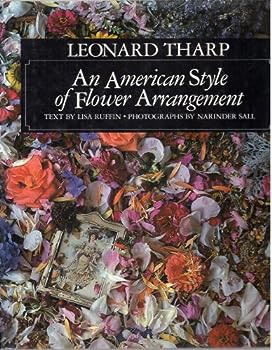 Leonard Tharp: An American Style Of Flower Arrangement, by Ruffin, Lisa This description may be from another edition of this product.

Published by Thriftbooks.com User , 16 years ago
Leonard Tharp was a friend of mine - a charming and very artistic man. He worked his way into the floral industry in Houston, Texas in the 1970's and quickly became 'the' florist of River Oaks, the richest section of Houston. Leonard was incredibly handsome, and utterly poised, but never came off as a snobby, arrogant queen. The River Oaks hostessess found him as attractive as the gay guys in the local discos found him to me. He was easily approachable and fascinating to talk with. In the book, Leonard explains that there wasn't one single part of any flower that wasn't attractive and usable, and he cleverly explains many examples. The book is divided by the seasons of a plant's life - from seed to dry husk. Can Leonard make even a dry husk beautiful? Yup - he can even show you how to make it jaw dropping. In both Leonard's home and in his shop, he had large aviarys which housed his collection of parakeets, who lived in the most beautiful bird cages that he acquired during his global travels. The book includes a wonderful look at these aviaries. At his funeral, the casket was fronted with a floral display of magnolias, and following the theme of his book, from left to right, it showed every stage in the life of 'the flower of the South'. Today he rests in Houston's Glenwood Cemetery, directly across from (Houston Billionaire) Howard Hughes. Leonard was a magical man, and I miss him dearly. This book is a wonderful record of his artistry for those of us who knew him -- and for those who are totally unfamiliar with him. If you love flowers, you'll treasure this book.
Trustpilot
Copyright © 2022 Thriftbooks.com Terms of Use | Privacy Policy | Do Not Sell My Personal Information | Accessibility Statement
ThriftBooks® and the ThriftBooks® logo are registered trademarks of Thrift Books Global, LLC