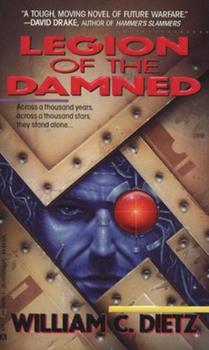 Legion of the Damned

(Book #1 in the Legion Series)

The first novel in William C. Dietz's acclaimed Legion of the Damned series... There is one final choice for the hopeless--the terminally ill, the condemned criminals, the victims who cannot be saved: becoming cyborg soldiers in the Legion. Their human bodies are destroyed and they are reborn as living weapons. But when aliens attack the Empire, the Legion must choose sides.

from cover to cover, an exciting adventure

Published by Thriftbooks.com User , 17 years ago
I've read all Dietz's books from "legion" to "for more than glory" and i must say that each novel has been a non-stop page turner. The writing style isn't bogged down with too much techical explanations, just enough to give the reader a basic idea of how things works. Fast paced action scenarios are easy flowing and don't give a forced or rushed feeling. Dietz is able to encompass both sides of action so the reader can easily understand what's going on without losing the intesity of the situation. i've highly recommended reading his books to everyone i know and do so to whomever i meet.

Cyborgs, Lasers, and Aliens are the Make up of the Legion

Published by Thriftbooks.com User , 22 years ago
If your looking for Courage, mixed with outstanding science technology and the every day struggle to do what's right. Then this book is for you. I've always loved armor eliments in a story and now with the addition of brain boxes you have mobile support that thinks. Mixed with your firpower is the grunt. The humanoid soldier that has no home but the Legion. I discoved Mr. Dietz while on vacation. I had come across the books in a random brook buying spree that resulted in a real find. For anyone that has read David Drake and followed the Slammers from campaign to campaign you can appreciate the way that the Legioniars come to life. Be it a knife fight in the desert or a full out assult against suppior odds you can really sink feel the emotion and Loyality that these troops have for their home. You will be introduced to a race that has only one rule submit or Die. A race that has for thousands of years have had to struggle not only with other races but with nature to survive and thrive. A race that doesn't understand negotiations. Only the total control of another race will make them less likely to wipe you out.This is an excellent adventure for anyone that knows the words Via La Legion!

The best book I've ever had the honor to read.

Published by Thriftbooks.com User , 23 years ago
Given to me by a friend this book is GREAT. You have the greedy humans on one side and the paranoid Hudathens on the other. It even has traitors and POWs. Great example of how Sci-Fi should be written.

Published by Thriftbooks.com User , 23 years ago
One of Dietz's best and my personal favorite. The story features one of today's most fantasized military units, the French Foreign Legion. But in this future, the Legion is created of volunteers of condemned criminals, patients with terminal illnesses, and those who have simply given up on life. So upon death, their brains are removed and installed in high-tech military cyborgs which are armed with all sorts of deadly weapons. These thousands of cyborgs form the "Legion of the Damned." Their principle enemy...a highly aggressive race of aliens who want to turn earth into a giant crater. Chock full of action, suspense, and intrique. Definitely alot of fun to read.

A must read for miliary Sci-Fi buffs!

Published by Thriftbooks.com User , 23 years ago
I found this a very well written book. Rating up with the best military sci-fi authors, such as Drake, if not better!! Not just a blood and guts type book, Deitz looks at many different aspects of futuristic war, from both a human AND an alien perspective. Everything from heroic sacrifices to a commanders ultimate defeat/victory, to politics in the future!! All in all, a very well done book, and one of the best military sci-fi books I have read.
Trustpilot
Copyright © 2022 Thriftbooks.com Terms of Use | Privacy Policy | Do Not Sell My Personal Information | Accessibility Statement
ThriftBooks® and the ThriftBooks® logo are registered trademarks of Thrift Books Global, LLC